In nursing school, they advice for people with upper respiratory infections to be in a slightly elevated position at the head region when sleeping. My intuition of the reason is that the lymphatic drainage to the venous arch works better; gravity helps to drain the lymph to the venous system; not only the heart. Bacterial infection of the pharynx occurs in a prolonged exposure of the concentrated lymph.

I got today exact information about exact positions to relieve the body most when sleeping:

Is there any studies about the effect of elevated sleeping position on the recovery time from the upper respiratory infection?

My conjecture. The slightly elevated position causes greater venous return (work against gravity by smooth musculature and thoracic pump). Why this is happening this way is partially based on my question here about Fast standing and the heart's insufficient accommodation of the increased venous return. 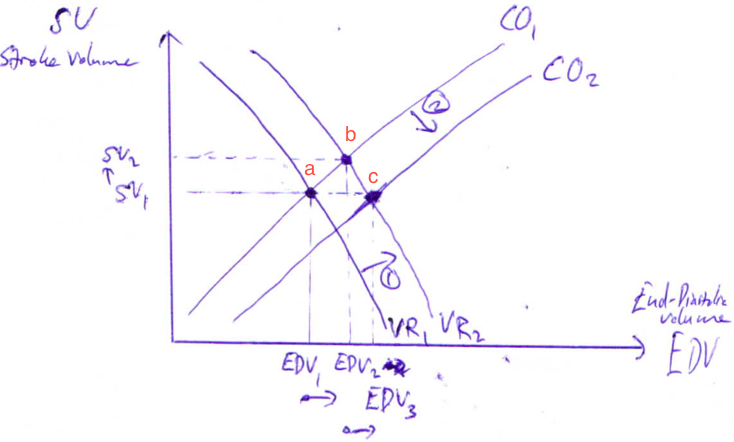 where the venous return reacts first the change in the position from supine by shifting the VR1 to VR2. The stroke volume increases initially to SV1 to SV2, while the end diastolic volume from EDV1 to EDV2. The increased stroke volume cannot be maintained long time so the cardiac output shifts to the right from CO1 to CO2. So the initial stroke volume SV1 is the same as SV3 (not in the picture). However, the EDV has increased (EDV3 >> EDV1) which increases much the lymphatic drainage. Lymphatic drainage is not dependent on the stroke volume. Increased lymphatic drainage then again increases the circulation of lymph. This then again supports the recovery from the upper respiratory infection where the fine regulation between

determine the final effect of the body position on the recovery times. The size of the thoracic cavity puts some limitations, for instance.

In some cases, the upper respiratory infection can cause myocarditis. This will decrease the functioning of the heart and cause possible

The nurse is educated to listen to the patient and ask for possible jolts and flips in the chest. Elevating position in such a case can help because of better supply for preload in the left ventricle.

These patients can breath normally in the sitting position. There are also other reasons for the infection:

Not the answer you're looking for? Browse other questions tagged human-biology physiology pharmacology cardiology infection or ask your own question.

26
What limits our healing speed?
14
Where does extra blood come from to fill your muscles during exercise?
2
Fast standing and the heart's insufficient accommodation of the increased venous return

5
Why is the upper respiratory tract so vulnerable to infections?