RNA or ribosome, which one moves during translation?

During translation ribosomes decode the genetic information present in the mRNA and protein synthesis takes place. During this process which of those two does move, the ribosome or the mRNA?

Here's an example in which the ribosome is fixed:

During co-translational translocation, the ribosome is essentially anchored onto the ER membrane through the Sec61 complex. It certainly cannot move along the mRNA. The mRNA is fed through the ribosome and the nascent peptide traverses into the ER lumen. 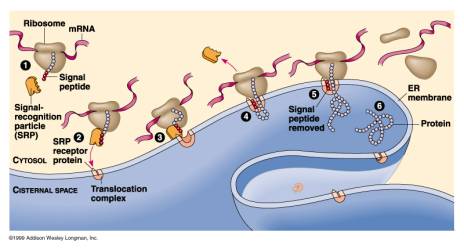 The ribosome moves relative to the mRNA by, in effect, pulling itself along it. If both the ribosome and the mRNA are freely floating and not attached to anything else (as in jp89's answer), the relative amount of movement should depend on their relative masses.

(Actually, it also depends on how much drag each of them experiences with respect to the surrounding liquid medium, but since I have no idea how much that is, and since it's probably highly conformation-dependent anyway, I'm going to just ignore that and just assume that the drag is also more or less proportional to mass, at least to first order.)

Also, as shigeta and others have pointed out, there can be more than one ribosome attached to the same mRNA strand. That's going to make the mRNA move more (and, correspondingly, the ribosomes move less), since there are more ribosomes pulling it along. Then there's also the protein being transcribed, which is attached to the ribosome but also being moved with respect to it. And I really have no idea how negligible the interactions with the tRNAs and so on are. It's a mess, but my guess would be that, usually, it's mostly the mRNA that moves, but that the ribosomes aren't completely stationary either (unless they're attached to something, of course).

Ps. Here's an exercise for you, which you may try out if you happen to have a friend who works at a public swimming pool. Otherwise consider it a gedankenexperiment. You know those floating ropes that separate the lanes in the pool? Try getting your friend to let you into the pool when it's not in use and to release one of the ropes from the walls. Then get in, grab the rope with your arms and legs and try pulling yourself along it. While doing so, try to decide whether it's you or the rope who moves more. (Also, to more closely approximate the Reynolds numbers involved inside a cell, imagine doing this in treacle instead of water.)

Movement is relative. The real events happening in translation are the conformational changes of ribosome makes itself continuous reading the base sequentially. Please refer the biochemistry textbook or cell biology textbook.

Indeed, if the ribosome is anchored, you may say the mRNA is moving.

The mRNA moves during translation. It is essentially threaded through the ribosome. This has been known ever since polyribosomes were discovered; see paper here. Polyribosomes are a cluster of ribosomes that read a series of mRNA molecules. Often, the ribosomes in a polyribosome will be translating the same mRNA.

The fact that ribosomes can collide with each other on the polysome during the translation process shows clearly that the ribosome is moving along on the mRNA.

3
How is mRNA directed out of the nucleus to its ultimate cytoplasmic location?

1
Which enzyme catalyzes transcription and which translation?
7
What exactly happens if during translation, an amino acid is not present?
3
What physical force attracts the anti-codon on tRNA to the codon on mRNA during translation?
2
How does the tRNA recognise the first methionine during translation?
3
How is mRNA directed out of the nucleus to its ultimate cytoplasmic location?
4
How does a ribosome move along mRNA?
1
What is the purpose of co-translational transport?
2
How do mRNAs find ribosomes?
6
How can a good SD / Kozak sequence enhance translation efficiency?