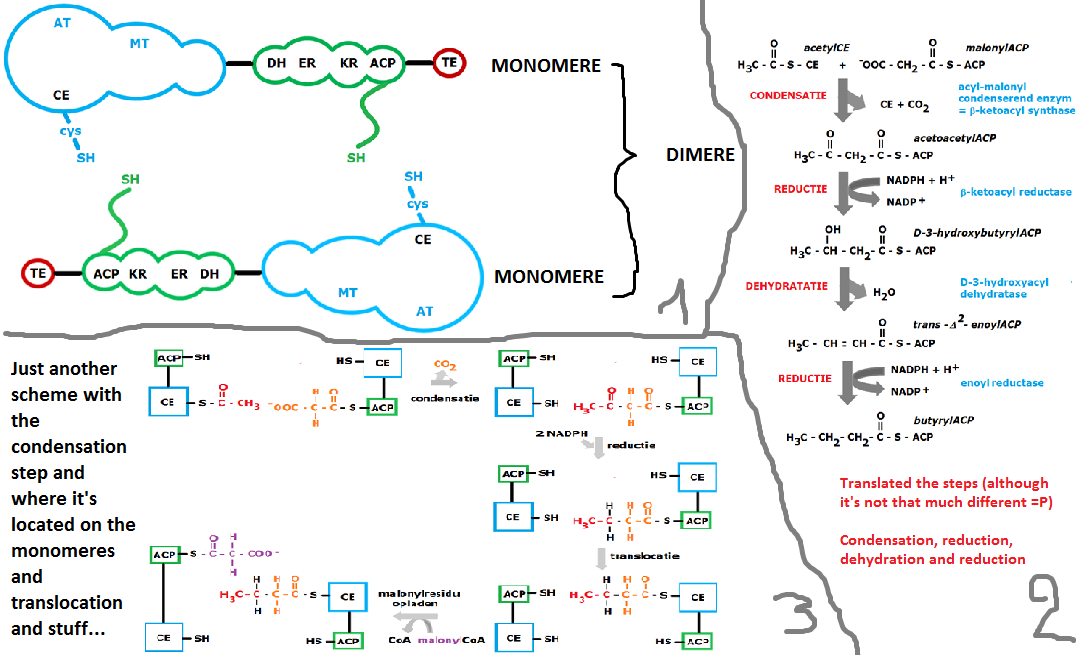 I have a problem in my reasoning on the fatty acid synthesis in the human body. In the synthesis process you have this homodimer.

So the synthesis starts with the transfer of a acetyl group from acetyl-CoA to the sulfhydrylgroup of the condensing enzyme (CE) with help of the acetyltransferase enzyme (AT) and this on 1 of the 2 monomers.

At the same time a malonyl group from malonyl-CoA is transfered to the sulfhydryl terminus of phosphopantotheine from the ACP, and this on the other monomer and with help of the malonyltransferase (MT) enzyme.

AND HERE THE PROBLEM STARTS

And after that the acetoacetyl-ACP will be swept back to the other monomer (to the reduction part), is this also right?

Then the reduction-dehydration-reduction steps are happening and at the end of the road you will get butyryl-ACP which will cut off from the ACP and migrate on the same monomer to the cysteine residue at the condensing enzyme (CE) (= translocation).

And after that you can start a new condensation-reduction-translocation cycle and go on until you end up at palmitoyl-ACP.

So the actual question is; is my reasoning right about how the product is going from one monomer to the other several times? In my book it's a pretty messy explanation and so I want to be sure I'm right.

I hope somebody can help me out =)

The textbook descriptions of fatty acid synthesis can be confusing because although the underlying chemistry of the process is universal, the way that it is organised is different in the systems that have been characterised, which include E. coli, yeast and vertebrates.

In vertebrates: The fatty acid synthase is a dimer of identical multifunctional single polypeptides. The synthesis process involves two -SH groups: one is the terminal group of the pantothenate of the acyl carrier protein domain (Pan-SH) and the other is an -SH group of the condensing enzyme (CE-SH).

The condensation reaction between these two results in the new elongated unit being attached to the Pan-SH. This unit then goes through the reductase/dehydratase/reductase steps to form the new acyl CoA which is finally transferred to an CE-SH group, opening up the Pan-SH for the next incoming malonyl CoA.

This will happen repeatedly in each cycle of the process. Obviously since each monomer has both -SH groups a single fatty acid synthase dimer can be engaged in two elongations at the same time, but these will always include a transfer. It is thought that the initiating acetyl group comes in via the Pan-SH group.

And after that the acetoacetylACP will be swept back to the other monomere (to the reduction part), is this also right? Then the reduction-dehydration-reduction steps are happening and at the end of the road you will get butyrylACP which will cut off from the ACP and migrate on the same monomere to the cysteïnresidu at the condensing enzyme (CE) (= translocation).

The diagram that you included clearly shows that the acetoacetyl group is formed via the reduction-dehydration-reduction steps on the same Pan-SH where its precursor was formed by condensation. Only then is it transferred to the CE-SH group. The diagram also indicates that the acetoacetyl group is transferred to the CE-SH of the same monomer. This implies that a growing chain never transfers from one monomer to the other. I have seen other sources which seem to suggest that this step does involve a transfer between monomers.

In fact it would appear from the discussion on the WP page for fatty acid synthase that this is an unresolved issue - see for example:

Animal fatty acid synthases are large polypeptides containing seven functional domains that are active only in the dimeric form. Inactivity of the monomeric form has long been attributed to the obligatory participation of domains from both subunits in catalysis of substrate loading and condensation reactions. However, we have engineered a fatty acid synthase containing one wild-type subunit and one subunit compromised by mutations in all seven functional domains that is active in fatty acid synthesis. This finding indicates that a single subunit, in the context of a dimer, is able to catalyze the entire biosynthetic pathway and suggests that, in the natural complex, each of the two subunits forms a scaffold that optimizes the conformation of the companion subunit.

Not the answer you're looking for? Browse other questions tagged lipids biochemistry fatty-acid-synthase fat-metabolism or ask your own question.

4
naturally occuring fatty acids
11
Synthesis of Fatty Acids Longer than 16 Carbons
5
Why are there only 6 molecules of water produced in the synthesis of the fatty acid, palmitate?
4
Why isn't acetyl-coA an entry point for gluconeogenesis?
1
Relationship between fatty acid chain and saponification number
4
Is a fatty acid a polymer?