Restriction endonucleases are found in?

Quoting from : Scientific American July 1975 The Manipulation of genes by Stanley Cohen :

Restriction endonucleases (and modification methylases) are widespread in microorganisms; genes for making them were found on viral chromosomes and extrachromosomal plasmid DNA as well as on many bacterial chromosomes.

Why would the genes for making RE be found on viral chromosomes ? Also, could you give some examples where they are found on plasmids ?

There are many proposals for the ecological role of restriction-modification (RM) systems, and why they would exist on mobile genetic elements (e.g. plasmids and viruses). In this case, I am specifically talking about the viruses that infect bacteria (aka, bacteriophage).

1) RM systems may have an anti-viral function. Normally we would think of such systems as being part of the host chromosome, but as Alan Boyd suggested, once a temperate phage has integrated itself into the chromosome, its fitness is tied to its host. Therefore, a RM system found in a prophage could prevent infections by additional phage. See here for a discussion of this issue: http://www.ncbi.nlm.nih.gov/pubmed/23471617

2) RM systems may have "addictive" properties by acting as toxin-antitoxin systems. Basically, this means that if the genes for the RM system are lost, the host cell dies. This can provide selection for the maintenance of plasmids and prophage inside of the host cell. See here for a discussion of this issue: http://www.ncbi.nlm.nih.gov/pmc/articles/PMC3874152/

3) Finally, viruses need to destroy the host genome -- both to suppress any anti-viral response and to release nutrients for viral replication. While this is typically achieved with nucleases other than restriction endonucleases, there is at least one situation where a RE seems to be involved. This is discussed in the first link above (see the section entitled "Role in Nutrition")

If you have a dsDNA genome and replicate it by rolling circle like most bacteriophages and many plasmids do, an endonuclease is pretty much a necessity. 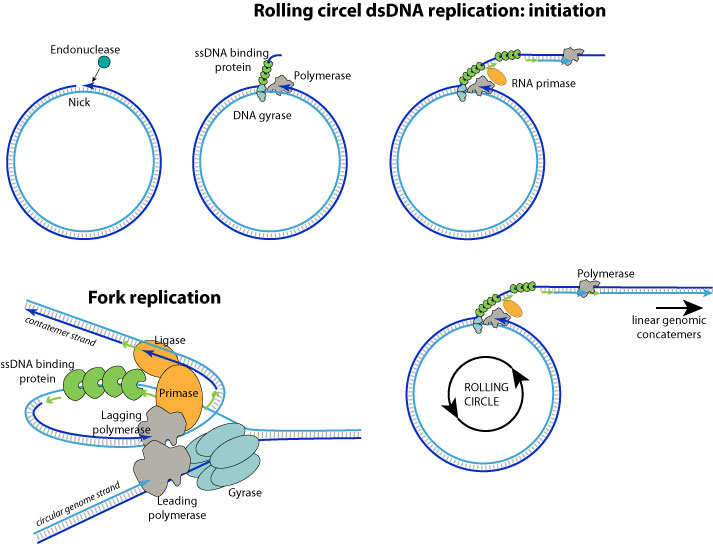 For an example of a phage encoded system see:

This second paper suggests an answer to why a phage would have such a system: lysogens of Phi42 are resistant to infection by all 23 members of a standard set of S. aureus phages. Once a phage has lysogenised it is in its interest to prevent lysis of its host.

Not the answer you're looking for? Browse other questions tagged bacteriology molecular-genetics virus plasmids restriction-enzymes or ask your own question.