I'd appreciate some help identifying these three corvids I photographed in Austria during the Summer:

I know identifying corvids can be difficult and I'm not an ornithologist -- just an amateur bird watcher. After looking through many images of various crow species and their hybrids, I've tentatively identified these as: 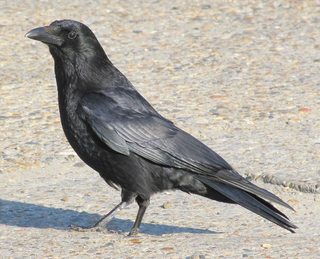 The plumage of carrion crow is black with a green or purple sheen, much greener than the gloss of the rook. The bill, legs and feet are also black. It can be distinguished from the common raven by its size (48–52 cm or 19 to 20 inches in length as compared to an average of 63 centimetres (25 inches) for ravens) and from the hooded crow by its black plumage 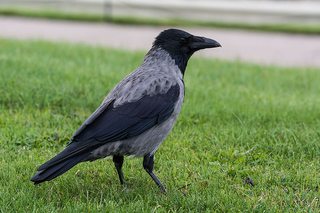 2. This one is a bit more difficult, but I think it is also a hooded crow or possibly a hybrid Carrion crow × Hooded crow (Corvus corone × Corvus cornix). 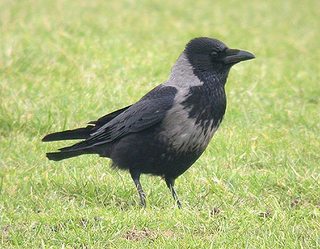 At first glance, #2 looked somewhat like a Western jackdaw (Corvus monedula) because the grey feathers travel fairly high up on its neck and because the bird appears to be somewhat smaller.

Measuring 34–39 centimetres (13–15 in) in length, the western jackdaw is the second smallest member of the genus Corvus...The cheeks, nape and neck are light grey to greyish-silver, and the underparts are slate-grey. The legs are black, as is the short stout bill.

However, C. monedula has fairly conspicuous grey eyes and its feathers travel up the neck/head almost as far superiorly/anteriorly as the eyes. Neither appear to be the case in your specimen.

All three species are common in Europe.

The first 2 are correct. The third one is actually a hooded crow. The different color of the wing depends on the generation of feathers. Feathers of different generations (changed during different time) are abraded (used) in a different way. The wing feathers of this guy are older than the rest.

Not the answer you're looking for? Browse other questions tagged zoology species-identification ornithology or ask your own question.