Genes, chromosomes, base pairs and the 23 pairs

OK so I'm a bit confused. Does a chromosome consist of genes and do genes consist of DNA? What about the 23 pairs in sexual reproduction? I can't remember what the pairs consist of

I will start from the small and go to the big organisational unit: All of this is constructed by DNA, the sequence of the four bases: adenosine, thymidine, cytidine and guanosine. They are abbreviated G, A, T and C and are called the letters of DNA.

Genes are organisational units formed by a specific sequence of the four "letters". Genes encode for all the proteins (in fact this is a simple view, but should be enough for the moment) and are the way the information of how the protein sequence looks is conserved.

All DNA is organised in the form of a long string of bases, which would be very long in higher organisms. To come around this problem, the DNA is organised in chromosomes, in which the DNA is wound around special proteins (the histones) and further wound up to get a compact form. The image below (from here) shows the relationship:

The 23 chromosome pairs are the 23 organisational units in humans, in which our genetic information is stored and organised. A picture of them looks like this (image from the same website as above): 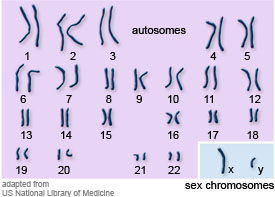 Please note that the chromosomes are not X-shaped, although they might look like on the image. They are pairs of long DNA molecules, which are not connected.

22
Is there an advantage to linear chromosomes?
25
Do apes and humans share 99% of DNA or 99% of genes? What is the difference?
2
Properties of Satellite Chromosomes
3
Meiosis and combinations of chromosomes
2
What happens to the complementary base when the other undergoes a base substitution mutation?