Diffusion of Hypotonic solution into solution with glucose and starch

Cell walls are selectively permeable to ions and organic molecules. Sometimes the selectivity is passive and a reflection of the physical laws governing diffusion. We can do simple experiments that strengthen intuition about transport across biological membranes. The following homework question concerns a situation which tests understanding of the basic ideas of osmosis and diffusion generally.

A bag made of a flexible semipermeable membrane is filled with a 10% glucose and 5% starch solution. This bag is permeable to water and glucose but NOT to starch. The bag is suspended in a a beaker containing a 10% glucose solution. In 30 minutes the bag can be expected to

Since the bag is impermeable to starch, I know that the solution in the bag isn't going to diffuse outside so it won't shrink, but would water from outside flood into the bag to try to dilute the starch concentration to the point that it's isotonic? Or am I not understanding some fundamental principle of diffusion?

The bag will swell.

Diffusion results in molecules moving down their concentration gradient.

@WYSIWYG has raised the spectre of colloids in the comments. I don't understand colloids so cannot comment, but I think that in the context of problems like this we are usually dealing with "soluble" starch. Here is an example of a calculation in which starch is treated as an osmolyte.

This procedure was done to see what happens qualitatively when semipermeable (dialysis) tubing containing a solution of glucose and protein is immersed in a solution of glucose alone. Given that water would diffuse into the bag, the question to be answered was whether there would be an equilibrium increase of sugar concentration outside the bag.

General procedure: A control dextrose solution was divided between a sac made of dialysis tubing and a drinking glass. A small mass of powdered BSA was added to the sac. The sac was suspended in the sugar-only solution and the solution outside the bag checked at 13 times during a 33-hour period. At about 8 hours protein was added to the bag since neither diffusion nor osmosis was being observed. After this the bag began to swell. Due to concern that BSA would affect the reading the measurements were compared with the control solution and not the inside of the bag$^1$.

Results: Results are given in the table below. Addition of protein is indicated by the arrow in the graph.

Discussion: This procedure was suggested in this answer at the Chemistry SE. The meter requires some practice to use. Protein was added to the bag in roughly 200mg increments until an influx of water occurred. The solutions had probably reached equilibrium within a few hours of adding the extra protein but fluctuation in temperature made this difficult to determine. The gross trends correspond to air-conditioner use.

Conclusion: This procedure was done twice with similar results. The results are qualitative and suggest that sugar diffuses out through the membrane. This result is consistent with the answer at PhysicsSE and also this website (Figure 4.1) which indicates that diffusion and osmosis (diffusion of water) both occur. At equilibrium the concentration of sugar is slightly higher outside the bag.

Problems/issues : (1) The meter is very sensitive to temperature $^2.$ (2) Perhaps because the dextrose was incompletely dissolved the measurement of control solutions took about an hour to stabilize. That is why the measurements begin at 110 minutes. (3) The meter gave errors outside a range of 30-500 mg/dl and after checking the standard deviation for a few concentrations of dextrose a concentration of 90 mg/dl was chosen. (4) It was not assumed that the meter functioned properly in the presence of BSA. Except for the last measurements, the glucose was measured outside the bag only.

$^2$ Concentration should remain the same after equilibrium [Fick equation] and should not be affected by temperature. Manufacture information for the meter omitted for this reason. Caveat emptor.

A graph (mg/dl v. minutes) was made from this table. The arrow indicates addition of protein to the bag. 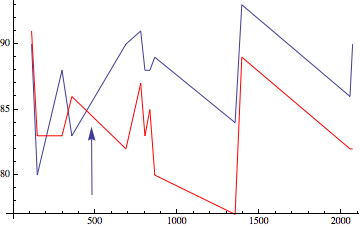 4
Hypotonic or Hypertonic solution and why?
2
When does DIFFUSION occur and not OSMOSIS, and the otherwise?
2
Osmolarity vs. Tonicity
5
What would happen if Carbon-14 was in a glucose molecule and decayed into Nitrogen?
7
Starch vs Cellulose. What are the differences between Alpha and Beta glucose ring structure in them?
1
Why does NaCl react differently with a boiled potato and with a raw one
2
Why is a urea solution hypotonic relative to RBC?