What does “thermodynamic equilibrium” mean for an enzyme-substrate complex?

The Michaelis-Menten mechanism assumes that the enzyme-substrate complex is in thermodynamic equilibrium with free enzyme and substrate.

In my understanding what this means is that the (E-, S- and ES-concentration dependent) rates of association and dissociation have equated. So we're kind of in this situation: 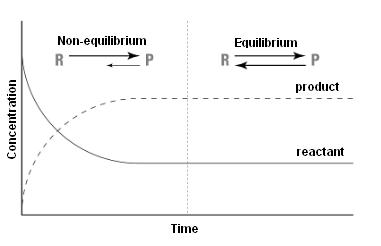 where "product" would be referring to [ES] and "reactant" to [E] and [S]. Does that make sense?

This was the initial assumption in the Michaelis-Menten model.

Later on this was improvised by assuming pseudo-steady state of ES complex. This means that $[ES]$ does not change over time, which is both as a result of its production by the reversible reaction: $E + S \leftrightharpoons\ ES$ and consumption by the irreversible reaction $\ ES\ \xrightarrow{k3} E+P$

8
What is the correct model for enzyme-substrate complementarity?
7
Enzymatic error rate
2
Does the Michaelis-Menten equation take in account the non-enzyme formation of products?
1
Why is the formation of an enzyme-substrate complex endergonic (induced fit model)?
2
Why does uncompetitive inhibition decrease the Michaelis constant?
2
Rate-determining steps in enzyme catalysed reactions
5
How to derive rate of product formation for an allosterically inhibited enzyme?
2
What does enzymatic equilibrium in % represent?
1
Why doesn't enzyme reaction rate rise linearly with substrate concentration?