Is there an antagonistic association between Penicillium and Aspergillus?

A totally unscientific guess is that Aspergillus is a good colonizer and Penicillium a good opportunist and that this is a common pattern with these two species. Is there any science in this direction? I do recall a sort of well-known picture from an old text in which Penicillium is shown more or less strangling a species of Aspergillus. I didn't think about it much at the time.

The image attached is not very incriminating but the theme is the same. Penicillium are the green hand-like structures strewn about the clover-like Aspergillus. Foot-cell of the latter cropped.

This seems like a simple question but a quick search doesn't reveal a lot, I think in part because this would generally come up as a contamination issue. 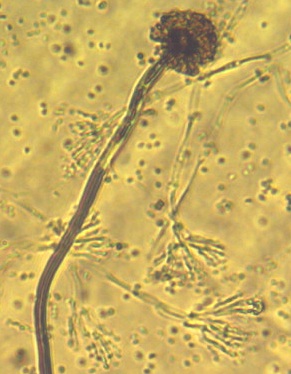 It is hard to find any articles on the association between Penicillium and Aspergillus species, although they are both considered two of the most common mold species found indoors.

In this study, the most prevalent spore types detected in both the indoor and outdoor air samples were generally from the Penicillium/Aspergillus group [...] these ﬁndings are qualitatively similar to those observed in other geographical locations, conﬁrming the ubiquitous nature of these fungi.

Although these genera seem to be found commonly, it also has to do with environmental factors, and the relative humidity of the area as well.

As for the association and apparently colonization/opportunistic behaviour of the genera, it seems like there are not any associations between the two, unless perhaps environmental conditions are subject to changing, and different mold species have different moisture/temperature thresholds, although again these mold groups tend to be generalists and do well at a wider range of environmental conditions than other fungi.

A laboratory procedure was developed in which viable peanut seeds were wounded and inoculated with field soil containing natural populations of fungi, then incubated under different conditions of seed water activity and temperature. [...] A. parasiticus colonized peanut seeds at lower temperatures than A. flavus, and cool soil temperatures relative to temperatures of aerial crop fruits might explain why A. parasiticus is found mostly in peanuts.

Other fungi, dominated by the genera Penicillium, Fusarium and Clonostachys, colonized seeds primarily at water activities and temperatures suboptimal for section Flavi species and A. niger.

Eupenicillium ochrosalmoneum frequently sporulated on the conidial heads of section Flavi species and showed specificity for these fungi. The inoculation of wounded viable peanut seeds with soil containing natural populations of fungi provides a model system for studying the infection process, the interactions among fungi and those factors important in aflatoxin formation.

Any associations with different fungi species and their different structures, including, for example, with the conidial heads of Aspergillus seem to be currently under study:

The genus Penicillium comprises species that mostly colonize plant matter. However early reports suggest that several species are capable of parasitizing Aspergillus and sporulating on the conidial heads of the host. More recently Eupenicillium ochrosalmoneum and E. cinnamopurpureum, [...] have been observed sporulating on the heads of Aspergillus species belonging to section Flavi during the colonization of peanut seeds.

Little is known about the host specificity underlying these Aspergillus-Penicillium associations. [...] all species spread across Aspergillus colonies by means of aerial hyphae that grew from head to head. Additional studies are required to clarify whether Eupenicillium and Penicillium species are parasitic or simply epibiotic on their hosts.

A year after the fact I found a short passage in Thom and Raper's 1945 text, Manual of the Aspergilli. At page 59 the authors relate that Aspergillus niger colonies are commonly overrun with Penicillium rugulosum which "winds its hyphae within and about the conidiophores, and fruits in a radiating series of short-stalked penicilli surrounding the heads and upper halves of the conidiophores." There is a photo illustrating this on p. 60.

Not the answer you're looking for? Browse other questions tagged ecology mycology or ask your own question.