What's the worst that can happen from eating too many spicy peppers? Can you die?

Some peppers, such as the habanero or Carolina reaper are extremely spicy, and when eaten in larger amounts than one is accustomed to, can cause some discomfort.

I've also heard anecdotes claiming that pepper spray, if applied with sufficient intensity, can cause death.

What if you were to eat as many spicy peppers as possible, despite the noxious taste? Is it possible to commit suicide in this way (and what would the cause of death)? Would you faint from excessive mouth pain? Would uncontrollable vomiting prevent you from consuming further peppers?

The more "dangerous" properties of spicy peppers are chiefly due to capsaicin.

Sigma-Aldrich sells purified capsaicin, for which they provide safety information, including an MSDS. Most of it is the usual, unsurprising set of warnings about irritation to eyes and the respiratory system. However, there are LD50 numbers:

From this, we can conclude that one would have to eat quite a bit of capsaicin to die. If lethality in humans is exactly the same as rat (which it probably isn't), a 70 kg human would need to consume about 11 g of capsaicin to reach similar levels of lethality.

The Carolina Reaper, one of the hottest known peppers, averages about 1.6 million on the Scoville scale. Capsaicin amount is related to Scoville heat units, so we can make an imprecise conversion from one to the other.

Using values given in 2 publications (Nwokem 2010 and Al Othman 2011) we can observe the following trend: 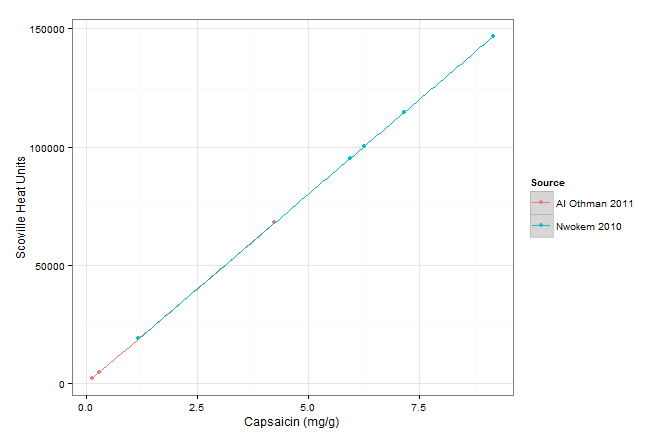 So, I think we can conclude that it is relatively "feasible" to consume a dangerously large amount of capsaicin by eating very spicy peppers. However, there are numerous caveats with my reasoning:

If you have cardiovascular problems, then it should be quite possible for the pain cause by spicy peppers to trigger a heart attack via a spike in blood pressure. A similar scenario might occur with respiratory diseases. And of course an anaphylactic shock, if you are allergic.

Apart from such special circumstances, I imagine that it would be nearly impossible to overcome the debilitating effects of capsaicin long enough to consume a lethal dose.

Not the answer you're looking for? Browse other questions tagged botany food toxicology or ask your own question.