What is the significance and method behind Ramachandran plots?

My PI showed a Ramachandran plot in class today with minimal explanation, but I'm interested in finding out more. I understand that the Ramachandran plot shows the relation between the omega phi and psi angleson either side of an amino acid alpha-carbon, but there are a few further points I'm confused about:

a.) What do these angles describe? Are they just dihedral angles that show translation around the bond-axis?

b.) Why are these angles important beyond the scope of identifying a secondary structure? Can they be used instead to identify the amino acid components, or only higher level structural units?

c.) What kind of instrument is used to collect the data and how are angles on either side of a single alpha-carbon correlated?

There are limits to possible distributions of phi and psi angles due to steric clashes between the side chains. Furthermore other limitations from higher order structure will result in the adoption of defined phi-psi angles. Using data from solved crystal structures, it can be seen that the dihedral angles will adopt specific conformations in a protein. 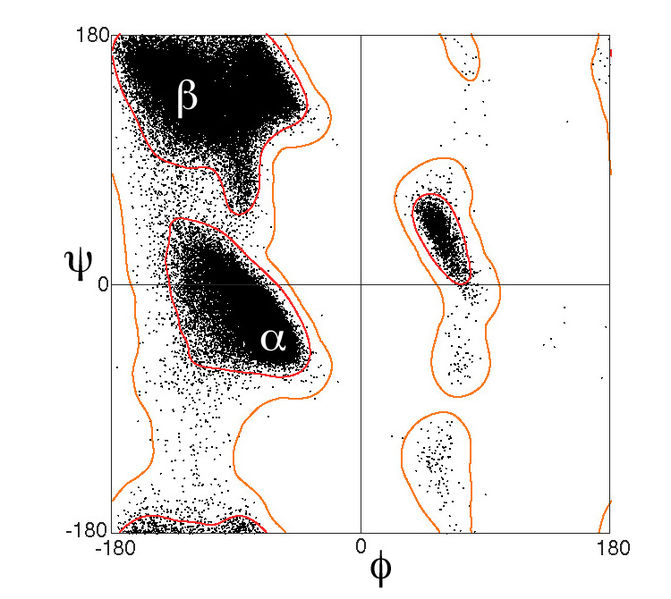 Furthermore, it can be noted that some of these conformations relate to specific secondary structures. As seen above, peptides in alpha-helices and beta-sheets adopt a even more limited set of phi-psi angles. Certain amino acids like glycine and proline, which differ from from canonical amino acids have an unique Ramachandran plot.

The angles from a Ramachandran plot are useful not only for determining a amino acids' role in secondary structure but can also be used to verify the solution to a crystal structure. Furthermore, it assists with constraining structure prediction simulations and helps with defining energy functions.

6
Compressing structural information in PDB files
7
Solvent Accessibility, the 20% cut-off method
9
Comment on the introduction to a bioinformatics paper
6
Turning publicly available genome data into proteins
1
Deduce length order of 4 decapeptides based on the Ramachandran plot
3
Protein Structure Parameters
0
Biological significance of correlation between the radius of gyration and number of layers of convex hull of protein structure
5
Should there be separate Ramachandran plots for an amino acid in different contexts?
0
Why are Ramachandran angles of first and the last amino acid not necessary to define the full 3D structure of a protein chain?