Computers are used in several steps of sequencing, from the raw data to finished sequence:

Modern sequencers usually use fluorescent labelling of DNA fragments in solution. The fluorescence encodes the different nucleobase (= “base”) types (generally called A, C, G and T). To achieve high throughput, millions of sequencing reactions are performed in parallel in microscopic quantities on a glass chip, and for each micro-reaction, the label needs to be recorded at each step in the reaction.

This means: the sequencer takes progressive digital photographs of the chip containing the sequencing reagent. These photos have differently coloured pixels which need to be told apart and assigned a specific colour value. 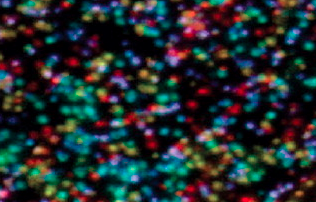 As can be seen, this (strongly magnified; the image is < 100 µm across!) image fragment is fuzzy and many of the dots overlap. This makes it hard to determine which colour to assign to which pixel (though more recent versions of the sequencing machine have improved focussing systems, and the image is consequently crisper).

One such image is registered for each step of the sequencing process, yielding one image for each base of the fragments. For a fragment of length 75, that’d be 75 images.

(This image is generated by an alternative sequencing process called Sanger sequencing but the principle is the same.)

Now you need to decide which base to assign for each position based on the signal (“base calling”). For most positions this is fairly easy but sometimes the signal overlaps or decays significantly. This has to be considered when deciding the base calling quality (i.e. which confidence you assign to your decision for a given base).

Doing this for each read yields up to billions of reads, each representing a short fragment of the original DNA that you sequenced.

Most bioinformatics analysis starts here; that is, the machines emit files containing the short sequence fragments. Now we need to make a sequence from them.

The key point that allows retrieving the original sequence from these small fragments is the fact that these fragments are (non-uniformly) randomly distributed over the genome, and they are overlapping.

7
How are whole Haplotypes for Sequencing isolated?
8
What's the use of DNA sequencing results?
6
What are the limitations of commercial-grade DNA genotyping compared to full sequencing?
1
DNA preparation for sequencing
4
DNA sequencing problem
2
Why is only one primer used for DNA sequencing instead of two?