What's the use of DNA sequencing results?

Suppose I sequence DNA of some organism (a human perhaphs) and now I have the entire DNA "string" - the sequence of nucleotides.

What's the use of that? It's just a "string" where nucleotides encode something but I have no idea what they encode specifically. So to me it looks like some raw data, just represented as a sequence of elements.

How is having the entire DNA sequenced useful?

It's just a "string" where nucleotides encode something but I have no idea what they encode specifically.

It sounds like you are describing a computer program, represented by a string of bytes on the hard drive.

Unfortunately, the analogy breaks down very quickly because DNA is vastly more complex and a lot of aspects are still poorly understood.

But the basis is the same: a string of symbols encodes information. In the case of DNA, different parts encode different things in a different manner.

The elephant in the room are of course coding sequences: stretches of DNA, contained in so-called “genes” – which code for proteins and other stuff.

Coding sequences use a fairly simple encoding schema that’s known as the genetic code, decoded in 1961. The genetic code has the nice property of being (almost) universal across all species, and easy enough for a child to understand:

Three consecutive DNA base pairs form a codon. Each codon stands for one amino acid (except for a special “stop codon”). Amino acids form so-called polypeptide chains – proteins. There are codon tables, just as you have manuals for assembly mnemonics in computing: 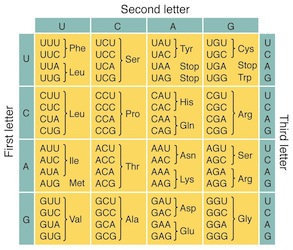 Unfortunately, it’s not trivial to know where genes are on the genome. Just by eyeballing the sequence there is nothing to distinguish one stretch of DNA from its surrounding. But there are certain recognisable stretches of DNA (“motifs”) which we can use to locate genes and other interesting regions.

Grossly simplified, a gene is preceded by a promoter region which is highly conserved between species (but gene-specific). Once you’ve identified one species’ promoter, you know it for other species. Furthermore, all promoters share highly similar elements, for instance the TATA box – literally the occurrence of “TATA” in the genome.

Of course, just looking for occurrences of “TATA” would yield vastly more spurious hits than actual promoters but combined with other information you get a gene model – a statistical machine which can tell you with high confidence where on a genome the genes are located.

Once you have found the genes in a sequence which you can trivially translate to amino acid sequences, you can try to form inferences about the function of the proteins (a protein’s function is an almost-direct consequence of its sequence). Unfortunately, discovering the function of a protein from its sequence alone isn’t possible but we do know the functions of many proteins.

When we now look at a genome and find a mutation in a protein-coding gene we can infer that the function of this protein is probably modified. Most mutations are so-called deleterious mutations (e.g. by deleting a single nucleotide you get a frame shift in the codons, and all the subsequent codons no longer make sense), meaning that they destroy the protein’s function.

Other, much rarer, mutations modify the protein’s function, making it more or less efficient, or giving it another function altogether.

In the simplest case (but these are rare), a single such mutation can explain a complex phenotype. This is known as a Mendelian trait and can be used to explain a phenotypes such as eye colour, but also hereditary diseases.

Usually, though, it is merely one of many adjusting screws which skew your susceptibility to a certain phenotype in one direction. For instance, you might be slightly more susceptible to breast cancer or diabetes.

This is one use of the DNA sequence, there are many more; in the last decade, we have realised that regulation of gene activity plays a much larger role than anticipated, and most research today looks at regulatory patterns on the DNA level. This is also done with sequence data, but there doesn’t appear to be a simple schema analogous to the genetic code to understand regulation. Instead, it’s a complex interplay of many completely unrelated mechanisms.

There is a whole lot you can do with genome sequences, I'll focus on a specific example here.

A gene encodes for a protein, but as long as you have only the DNA sequence of that gene you can't easily find out what exactly the protein that is encoded by the gene does. There are ways to predict certain characteristics of the protein, but you really want to have large amounts of the protein itself to be able to examine it in detail.

Having the sequence of a gene allows you to put that gene into other cells, often bacteria but also yeast cells, insect or mammalian cell lines. Using those you can then mass-produce the protein, purify it and start to study its structure and function.

Getting the protein without a sequence means you need to extract it from whatever organism produces it. This is only feasible for proteins that are produced in very large amounts, and even then it probably means you'll have to process a large amount of material to get enough protein. Having the sequence available enables us to study a lot more different proteins than we could by purifying them from their original source.

As the others mentioned, identifying and annotating protein coding genes is an important part of any genome sequencing project. However, there are a variety of other things you can do with a complete genome sequence. You can annotate other types of features, such as transposable elements and repetitive sequences, you can sequence mRNA and map it back to the genome to get a measure of gene expression for a particular tissue, and you can look for variations in the genome such as single nucleotide polymorphisms (SNPs), copy number variations (CNVs), and other large scale variations. If other related genomes are available, there are a lot comparative genomics questions you can ask about large-scale conservation (synteny), DNA substitution rates, relative DNA composition, etc. We are really just beginning to scratch the surface as to the wealth of information a genome contains and how that information is biologically processed.

Not the answer you're looking for? Browse other questions tagged dna bioinformatics dna-sequencing or ask your own question.

13
Sequencing the genomes of polyploid organisms
4
DNA sequencing problem
4
Trying to understand the big picture behind DNA sequencing, alignment and searching
6
What does it mean to "map the human genome"
1
Is there a good analogy that illustrates the difference between early DNA sequencing techniques and shotgun sequencing?
4
Determining the Accuracy of DNA Testing
1
Sequencing two strands of dna
0
How to find sequencing data of a specific drosophila strain
2
How are fragments isolated during shotgun Sanger sequencing?