Is there a good explanation for this swarming pattern?

A film clip would be helpful here. A few days ago I noticed a swarm of newly hatched flying bugs about 20 feet away from me with the sun behind them so the shape of swarming (such as it was) was easy to make out. Several times, after creating various spiral shapes or chaotic masses they returned to a sort of 'holding pattern' which I either never noticed or never saw before. To a pretty good approximation the bugs arranged themselves in what seemed like an "oscillating drum head" pattern that is well approximated by a rotated sinc function. The peak at zero is a little exaggerated here but the bugs were more or less dispersed on a shape like: 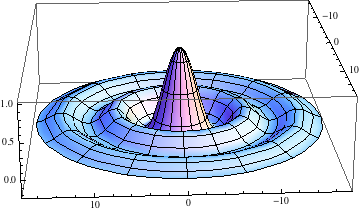 subject to a light breeze and continuous adjustment. I know that people have studied swarming behavior and made models but are there any that account for this one? It has a lot of significance in ODEs and engineering but I never associated it with swarming behavior.

The following is nothing but the guesses of someone who doesn't know much about swarming!

One pattern that is often found (through computer simulation and empirical observation) in swarming is a simple 2D rotation. 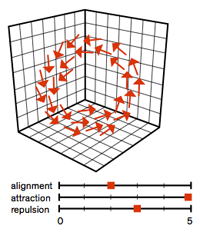 Let's first consider only the static form of the shape you observed. This shape might be the consequences of multiple rotating layers. Do you remember what kind of dynamic had the individuals within your sinc function?

Oscillation is a pattern that is also sometimes observed in swarming. The oscillating behavior might be the result of inertia. Just like a pendulum, individuals that are far away from the group accelerate continuously in the same direction up to the point they reach the middle of the group. Then they undergo a inverse acceleration up to the point they reach a null speed and then start their cycle again. This inertia depend on the number of neighbors they align their movement on are low. For example, it has been shown in I don't remember which species of birds (I can't find the reference) that each individual align their movement according to only the 6th closest neighbors.

For more information about the 3 basic rules (separation, alignment, cohesion) that allow swarming behavior, have a look to the wiki page

In short, I hypothesize that thanks to the underlying 3 basic rules of swarming, the patterns of rotations and inertia together allow to explain your observations.

Not the answer you're looking for? Browse other questions tagged entomology mathematical-models or ask your own question.

9
To what extent is immature eggs in insects (beetles) a good approximation for maximum fecundity?
5
Is there a standard reference for the importance of tumor heterogeneity?
3
Is there a maximum size for an insect?
3
Is urban beekeeeping harmful or are there good practices to follow?
1
Can swarming locusts act as a vector for any human pathogens?
4
Identify this insect with a big "face" pattern on its brown fuzzy wings
4
What is this insect wing, based on its vein pattern?