Are Asian people genetically predisposed to be shorter than Europeans?

Are these differences in height due to environmental differences between people in different countries, or does genetic differences play a role?

In particular, are Asian people (people from Far East countries like Japan) genetically predisposed to be on average shorter than people who are of European descent?

Note: This is too long for a comment, so I will post it as an answer, even though it is merely an example and not a full answer to your question.

An example of the environmental influence on human body height can be found in the statistics assembled by the Swedish conscription service from 1840s to 2010 (when general conscription ended). During this time the average height of Swedish men (aged between 18-21) increased from 167.4 cm (in 1841-45) to 180.2 (in 2004), an increase of 12.8 cm or 7.6% (Werner 2008, unfortunately in Swedish, but tables 2 and 3 should be understandable). Here is a graph of the data found in the paper: 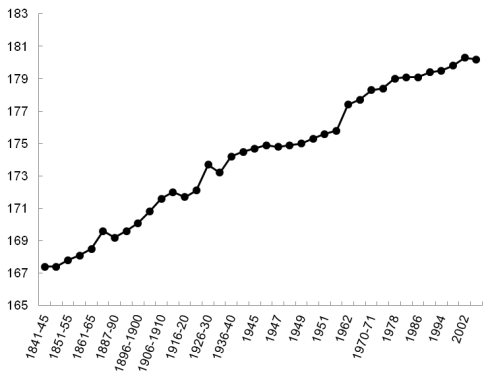 During this time Sweden has gone from what would have been a bottom-20 position in the wikipedia list of average human heights (close to contemporary India or Mexico) to a top-10 position. This is clearly not due to changes in the genetics of the population, but to changes in the environment (probably mainly due to nutrition). I know that many countries have gone through a similar development, and this is usually refered to as a secular change or trend in body height and weight (see e.g. Roche, 1979 and Loesch et al., 2000 for further examples).

Nothing of this naturally contradicts that genetics is a powerful determinant of human height. However, it shows that the average height in two countries cannot be compared in a meaningful way (at least if you want to infer genetic differences) without knowing something about the nutrition status and the average living conditions in both countries. The situation is rather that genetics is setting the limits of potential height, but that environmental factors will determine the actual outcome. This is also discussed in the paper above, but there are certainly better references to be found in English. In the reference list (#9, #10) you can also find examples of how there are also well-known genetic determinants of e.g. short stature in some human populations (in this case decreased insulin-like growth factor I receptor expression and function in African Pygmys, see ref #10)

21
Height and natural selection in humans?
8
Why do humans grow taller than their ancestors?

9
Do the right-handed people tend to use the right side teeth of their jaw to chew food more often than the left-handed people?
8
Are males taller than females in humans?
2
How are some people able to continue growing after reaching maturity?
1
Do Japanese have a different pelvis position than Europeans?
3
Do women tend to have longer legs and shorter torsos than men?