Why isn't DNA like RNA; why isn't RNA like DNA, that is, helical? Why are RNA chains straight?

The helix shape of DNA molecule is a consequence of its secondary structure. This refers to the bases contained in the molecule which pair, thus determining tertiary structure [1].

Basepairing also occurs in RNA, so it can form a double helix. In fact, RNA is composed of short helices packed together [2]. Base pairs maintain DNA's helical structure no matter the nucleotide sequence [3].

A nucleic acid strand is composed of nucleotides joined together by covalent bonds between the sugar of one nucleotide and the phosphate of the next. Adenine pairs with thymine and cytosine pairs with guanine by hydrogen bonds and form the double-stranded structure [3]. Because covalent bonds are stronger than hydrogen bonds, the double helical structure of DNA is easily broken by heat [4], but the nucleotides remain bonded together.

Here is the tRNA molecule (you can see it has short helices): 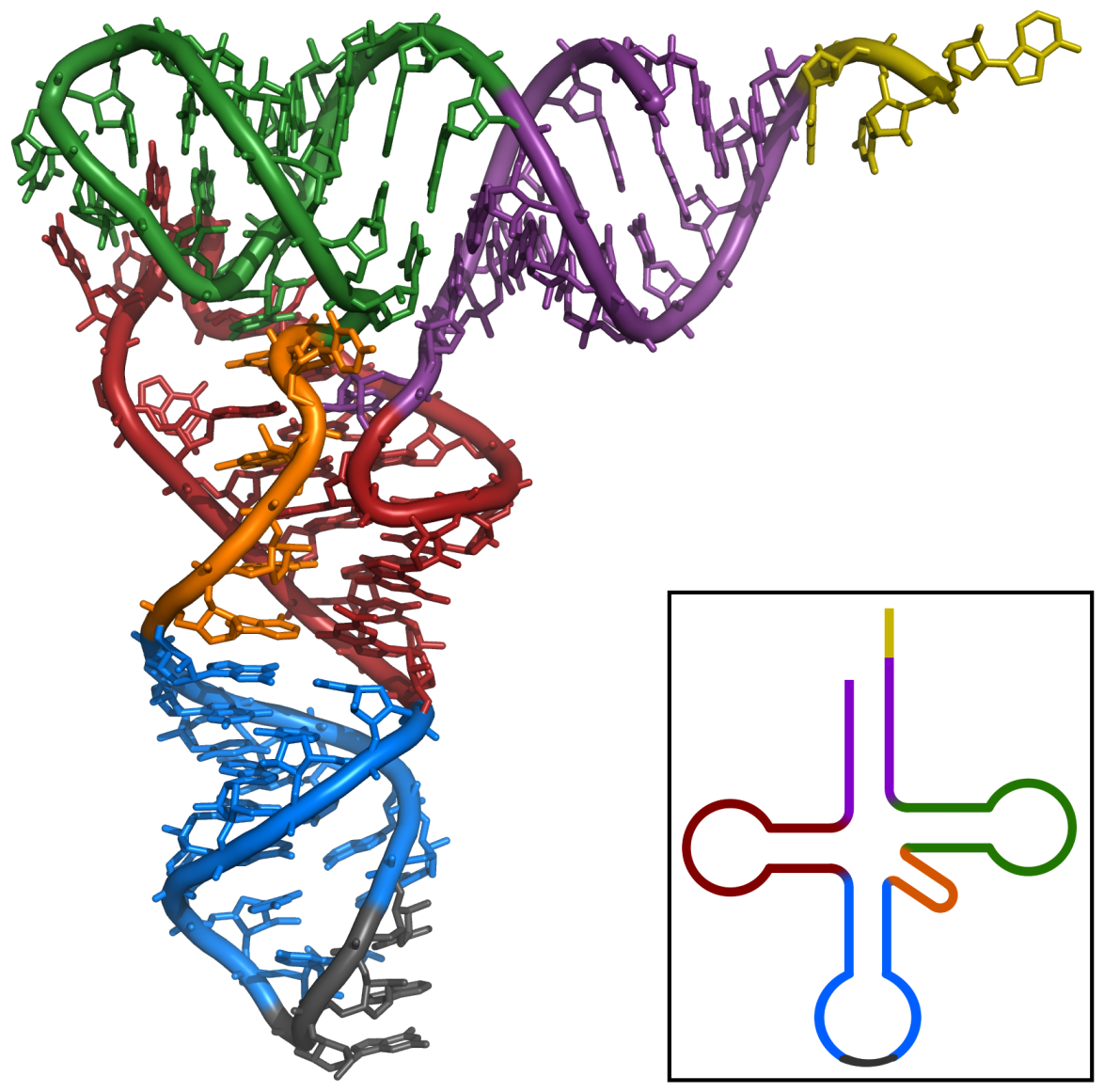 Here is the DNA structure:

"ADN animation" by brian0918™ - Own work. Licensed under Public domain via Wikimedia Commons.

RNA (single or double stranded) actually can and does form a helix in the absence of certain complex 3D structures. The RNA helix is typically A-form, as opposed to B-form for typical DNA. The A-form helix is right-handed like the B-form but is more compact (2.6 Å rise versus 3.4 Å) and wider (26 Å diameter vs 20 Å). The differing helices arise from the 2'-OH present in RNA which sterically hinders the formation of a B-form helix (by constricting the ribose to C-3' endo pucker). 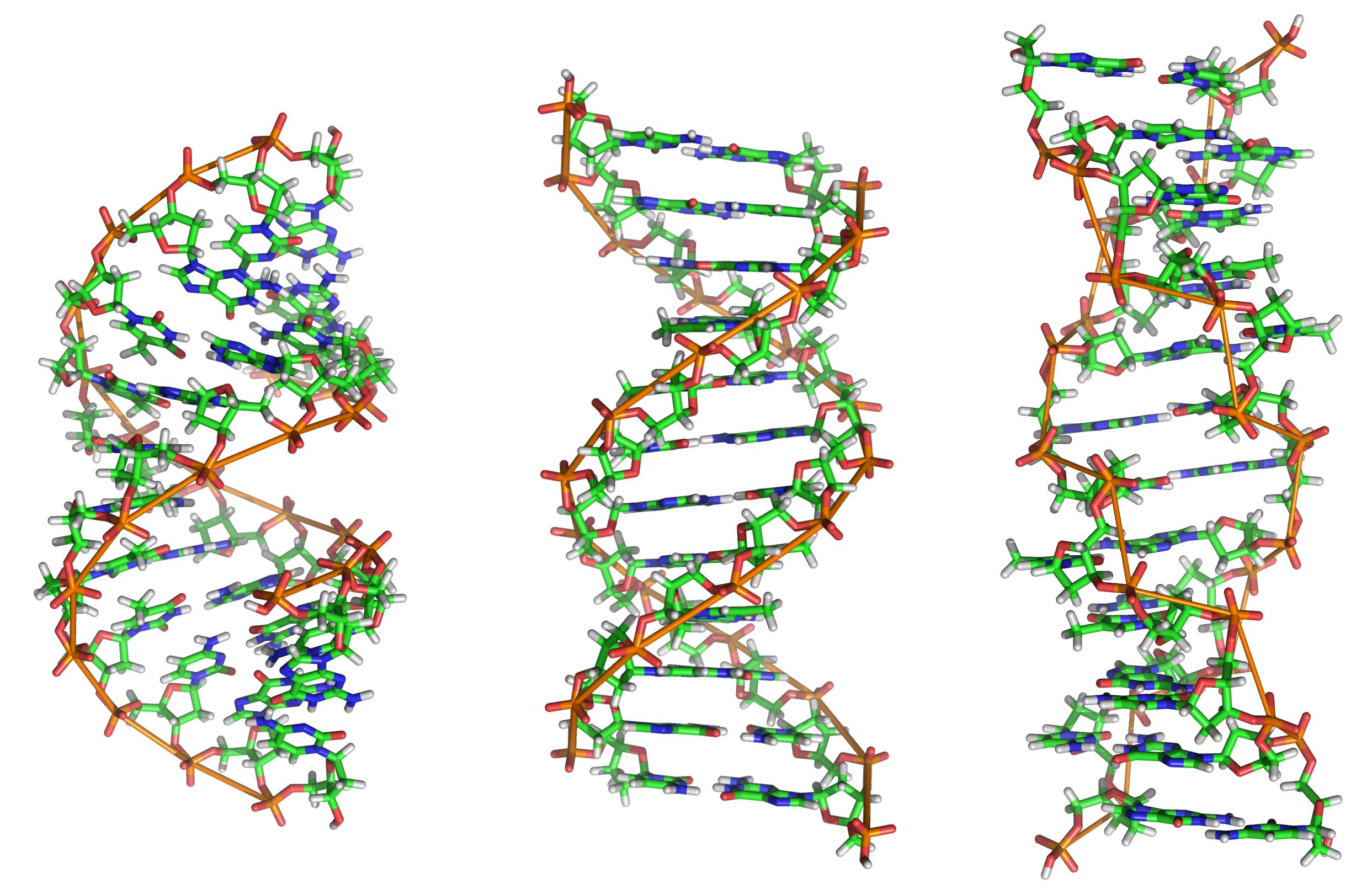 [From Wikipedia. Double stranded DNA helices. A-form is on the left, B-form in the middle and Z-form on the right. There are other forms not illustrated here.]

[From Wikipedia. A hairpin loop (the result of intrastrand base pairing in a single RNA molecule) that has adopted an A-form helix.]

The helices of both DNA and RNA form in aqueous solution because of the hydrophobic and aromatic (which also implies planar) nature of the bases themselves. By forming a helix, the bases within one strand come closer together which is thermodynamically more favourable because of stacking interactions between the conjugated ring systems as well as the exclusion of water from their hydrophobic surfaces (which thus increases entropy).

8
Why do DNA and RNA have the functions they have?
3
The move from RNA to DNA and the necessity of reverse transcriptase
24
Why deoxyribose for DNA and ribose for RNA?
2
Why isn't the DNA in bacteria always split up and replicating?
2
Why was not RNA completely replaced by DNA when the RNA world evolved into a DNA and protein world?
1
At what point, when connected, do DNA strands become a helix?
3
What makes/breaks the hydrogen bonds between DNA and RNA during transcription?