Where do trees get their shape?

Does anyone know any good resources dealing with shapes of trees?

For example, pine trees are cone shaped for optimal absorption of sunlight, but lone pine trees growing in isolation (and other commonly cone shaped conifers) often grow very high above ground and have no well-defined shape. Presumably, when there aren't neighbours to compete with for sunlight or space, the optimal shape is..well, whatever shape absorbs most sunlight; less constraints = more possibilities.

Looking for an answer that explains this sort of phenomenon. Thanks.

Dr Karl Niklas from the Cornell University has written a book about the effects of factors that influenced the shape of early trees. He created a computer model in which he drew trees in the shape that favored particular characteristics.

When he combined these three favourable traits, he noticed that most of the trees today are in a form that favors these three traits (reference). 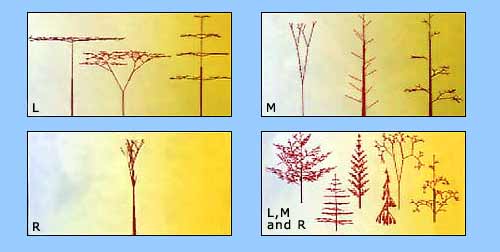 L is light favourability, M is mechanical stability and R is the shape of trees that favor reproductive ability.

Explanations for a few shapes found commonly with examples can be found in this article.

Illustration for the common tree shapes Columnar, Pyramidal,Vase, Round, Spreading, Weeping and umbrella with a few more examples can be found in this article (reference).

Another interesting thing about trees is the way in which their shapes can be influenced for the purpose of landscaping (reference).

What you mentioned about pine cones in isolation having no definite shape at all, I would like to see a reference that this is a fact before I can elucidate on it further (I couldn't find any articles that mentioned such a phenomenon).

The reason you felt so could be because it were two completely different species of pines. Counting varieties and subspecies, the plant list of the Royal Botanic Gardens, Kew and Missouri Botanical Garden accepts 175 names of pines as current(reference). Here is a list of different pine species (reference).

Here is an article on how tree shape and light available influence yield in cherry trees.

Plants are genetically programmed to grow in certain shapes; many are subject to apical domination, but it's a very complicated subject, involving exterior influences such as extreme wind causing different growth, and a host of other environmental factors, together with auxin and other plant hormones impacting within the plant itself. The basic tree shapes are columnar, weeping, pyramidal, horizontal branching, vase shaped, round or globular, and all these shapes are programmed in the genetics of the plant. There is a book I know of called Dynamic Models of Plant Growth by Nikolai Bessonov, but it contains an awful lot of scientific biology stuff - I don't know of any simpler books.

1
Length at which a branch 'branches'?

10
How can a monocot get so massive?
36
Do trees really get a large share of their mass from the carbon in the air?
9
Why do many fruit trees have five-petaled flowers?
3
Where does crop biomass come from?
1
How do trees grow?
6
Trees growing around objects vs pushing them away. Where is the threshold?