Can one dendrite pass through another?

While tracing dendrites on EyeWire I encountered the following situation. They belong to an Orientation Selective Ganglion Cell. 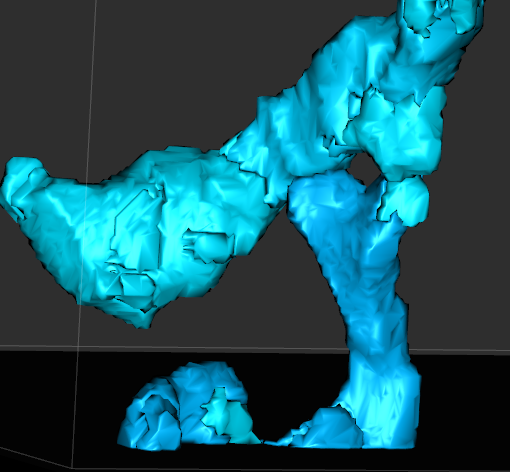 It's the first dendrite I've noticed with such a clear 'hole' in it, though which another dendrite passes. 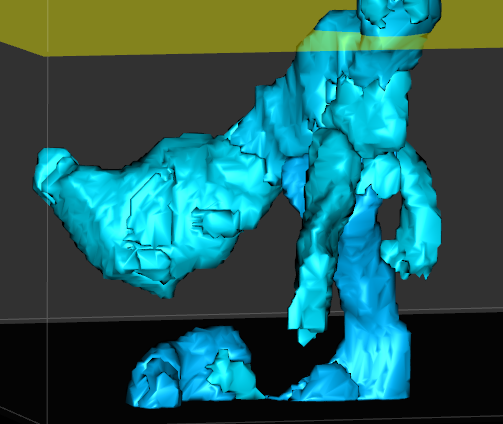 Is it possible for one dendrite to pass through another? Perhaps I shouldn't have 'connected' the top part with the bottom part?

I can't think of any reason that would explicitly prohibit a dendrite from travelling through a space created by another dendrite's branching pattern. In non-EM images of dendritic branching patterns I don't think I have ever observed dendritic loops, but of course, that has nothing to do with whether or not they occur. Nonetheless, I think there are more likely explanations for what you are seeing in these particular images.

As shown, the upper and lower parts of the "dendrite" in the first image do not look like a continuous structure. I would guess that you are looking at a synapse or some other contact between two different processes in the first image. The 3-4'o'clock connection in the loop suggests this interpretation. Can you see vesicles in the images around those connections?

Of course, it could be that you and the computer have just completely misunderstood the data. My understanding of the Eyewire interface is that the computer guides a lot of the identification and doesn't easily allow you to see the surrounding areas so you can't track structures all the way to their sources. In such a situation, it seems probable that you would end up with ambiguous instances like this that you would have a hard time resolving without more information/expertise. But maybe Seung or one his colleagues can come weigh in on that?

Not the answer you're looking for? Browse other questions tagged neuroscience dendrites or ask your own question.

2
Does one neurotransmitter travel all the way through the nervous system?
14
How can action potentials be generated through thoughts?
9
Why can action potentials not be initiated at dendrites?
6
Can the dendrites of sensory neurons be a meter long?
6
Why does the refractory period of neurons only allow signals to pass in one direction?
6
Why is it that I can understand speech through one ear better than the other ear?
1
Speed of passive transport of ions in the dendrite
2
Can cerebrospinal fluid pass through the pia mater or ependymal cells of the ventricles?
2
How does fluid pass through the glial limitans into the subarachnoid space?