Which of the following demonstrates the pattern of development in Greylag Geese? 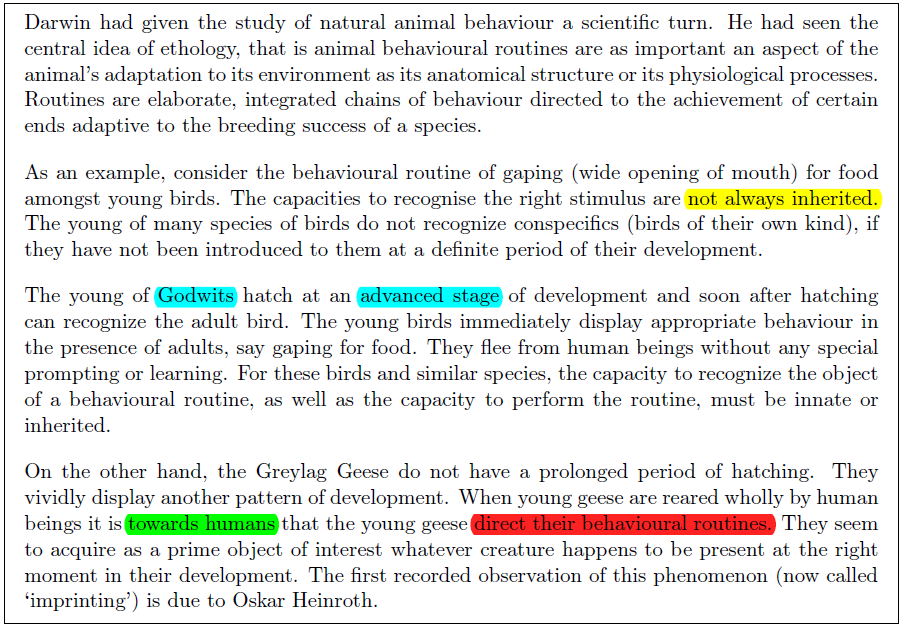 Which of the following demonstrates the pattern of development in Greylag Geese? {Please give specific answers, which among the following gives the best available demonstration?, If needed, have a look at the Paragraph (Image Embedded)}

(A) Geese reared by humans cannot be taught to respond to its own species.

(B) The hatching at an advanced stage is critical for imprinting.

(C) The capacity to recognize an adult of its own species is necessarily inherited.

(D) Rearing by humans does not alter the object of the behavioral routine.

So Am I correct?

Your logic seems fine to me..

Option B: The hatching at an advanced stage is critical for imprinting.

This is wrong because Konrad Lorenz (who rediscovered imprinting)

demonstrated how incubator-hatched geese would imprint on the first suitable moving stimulus they saw within what he called a "critical period" between 13–16 hours shortly after hatching (reference).

So saying that the hatchling should be at an advanced stage is incorrect.

Option C: The capacity to recognize an adult of its own species is necessarily inherited.

Again this is incorrect because Lorenz has also stated that

The human-imprinted gosling will unequivocally refuse to follow a goose instead of a human, but it will not differentiate between a petite, slender young girl and a big old man with a beard (Lorenz, 1965) (reference).

Also in this article it is implied that starlings that are imprinted to humans do not relate to its own kind.

Option D: Rearing by humans does not alter the object of the behavioral routine.

From the earlier findings, this is obviously false. Moreover a duck keeper has explained imprinting thus:

An imprinted duck--a duck that was raised from the moment of hatching by a human and so views the human caretaker as a parent or equal--may become accustomed to riding in the car. Imprinted ducks might go camping with you (although you must keep them beside you at all times or in a crate) or go on play dates to a friend's house (you will not want to take them to a farm or a public pond where they may contract diseases). If your duck is in a diaper, you will need to change the diaper every hour or so (reference).

Option A: Geese reared by humans cannot be taught to respond to its own species.

imprinting is irreversible. It is essential in learning that what has been learned can be either forgotten or modified (reference).

However there are claims to the contrary nowadays with it now firmly established that filial and sexual preferences are reversible (reference). Another interesting article by the American Psychological Association with a few links you might want to check out.

In conclusion, Option A could also have its problems with some response to its species possible, but overall it is the most and best plausible answer. 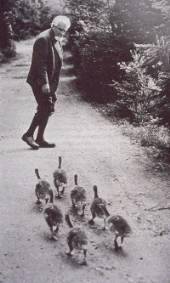 Not the answer you're looking for? Browse other questions tagged zoology ethology ornithology or ask your own question.

5
Which of the following lacks DNA?
8
Why do emperor penguins breed during the antarctic winter?
1
Which animal that lives in the forest makes this noise?
1
Do non-migratory canada geese still exhibit migration behaviors?
3
Which bird is this?