The RNA world hypothesis states that self-replicating RNA (that is, an autocatalytic RNA polymerase) was the first form or precursor of life. So, in that context, your question is basically asking how life originated. The obvious answer is that we don't know (currently anyways), but I'm going to take this opportunity to describe a few really neat experiments which might give you some insight over a possibly contributing mechanism of how self-replicating molecules may have developed. I won't go over the Miller-Urey or Oró experiments, but let's assume that the early Earth contained organic molecules (especially nucleotides for our purposes). It's also important to keep in mind the immense time scales over which these processes occurred (the Earth is ~4.5 billion years old).

Anyways, let's talk about in vitro evolution, also known as systematic evolution of ligands by exponential enrichment (SELEX). SELEX is a procedure whereby an initial library of random RNA sequences (flanked by known sequences to be used as primer sites) undergoes a selective process followed by amplification and mutation of the selected molecules. This is repeated several times. As an example, this process can be used to create aptamers, which are small RNA molecules which bind a specific ligand. A pool of random RNA is passed over a column containing the immobilized ligand. By chance, some RNA will have some amount of affinity to the ligand. Poorly bound RNA is washed off non-stringently and then slightly better bound RNA is eluted. This RNA is reverse transcribed and amplified by PCR. The PCR primers contain the T7 RNAP promoter which allows transcription of the cDNA to produce a new RNA pool. Somewhere in this regeneration process, mutations are introduced so that the new pool contains randomly modified copies of the RNA which had some affinity. Through repeated steps of increasing stringency, an aptamer with high affinity can be developed. 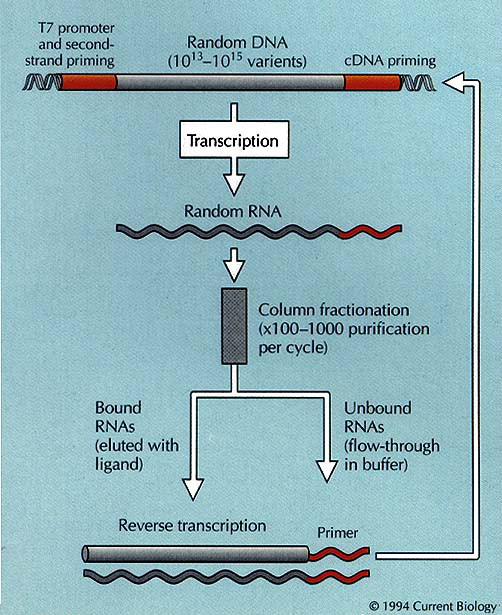 So how does this apply to the origin of the first RNA polymerase? It just so happens that Bartel and Szostak (1993) used in vitro selection to produce a ribozyme (a catalytic RNA molecule). This ribozyme was a ligase, that is it catalyzed the formation of a phosphodiester bond between two RNA molecules that are aligned on a template.

(Bartel and Szostak, 1993); Methodology of the selection used to generate a ribozyme ligase.

While the ribozyme created was not autocatalytic, the experiment had implications on the origin of self-replicating RNA and life in general, which were discussed in the paper:

The ribozymes that we have isolated from a pool of random sequences catalyze a chemical transformation similar to that catalyzed by polymerases. Their abundance in the random-sequence pool is therefore relevant to the hypothesis that life began with an RNA replicase that originated from prebiotically synthesized random-sequence RNA. We detected about 65 sequences (Fig. 8, pools 3 and 4) capable of carrying out a particular ligation reaction in a pool of more than $10^{15}$ initial sequences, or a frequency of occurrence of one in about $2*10^{13}$ sequences.

Presumably, sequences capable of acting as efficient template-directed RNA polymerases are more rare than this, and sequences capable of acting as an RNA replicase are even more rare. Evidently, catalysts of moderate activity could arise spontaneously from relatively small quantities of RNA (and perhaps related polynucleotides); however, a catalyst with the activity, accuracy, and dual functionality (enzyme and template) of an RNA replicase would be so rare that it could only arise spontaneously and in a single step from a truly enormous amount of RNA. The problem is compounded because two such sequences would be required for autocatalytic replication to begin, one to act as the polymerase and a second to act as the template. Therefore, an RNA replicase could only have arisen from primordial sequence pools that were not truly random. Joyce and Orgel anticipate this difficulty and propose that nonenzymatic, template-copying reactions may have had a dual role in generating primordial sequence pools that are more likely to give rise to a replicase (21). The initial pool may have been biased in favor of local secondary structure by a mechanism involving intermittent use of intramolecular sequence as the template. In addition, some sort of nonenzymatic catalysis was probably necessary for the initial copying of the replicase sequence to generate a molecule that could be used as a template, the copying of which by the replicase would generate more replicase molecules, thus initiating the autocatalytic explosion of life.

The ribozymes that we have selected provide a new starting point for the evolution or design of RNAs with RNA polymerase and replicase activity. A series of issues including sequence-independent primer-template binding, the use of mononucleotide triphosphates as substrates, fidelity, and product-template dissociation now need to be addressed before an RNA replicase activity, an activity that has probably been extinct for over 3 billion years, can be fully resuscitated.

Johnston et al. (2001) took this experiment even further: starting with a pool of slightly mutated ribozyme ligases developed in a previous SELEX experiment, they were able to generate a ribozyme polymerase. This polymerase was able to catalyze the addition of nucleotides to a growing oligonucleotide chain up to 14 bases long and based off of an RNA template. The polymerase was also quite accurate. 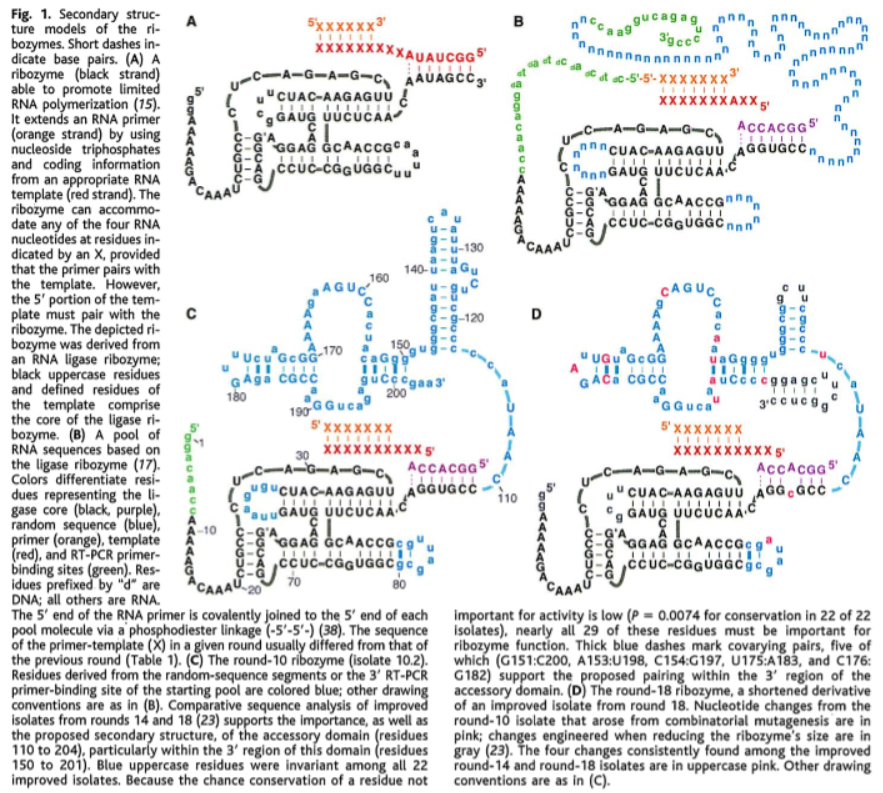 (Johnston et al., 2001); Excerpts from the in vitro evolution of a ribozyme polymerase.

However, the authors are skeptical of this being the sole mechanism behind the rise of an autocatalytic ribozyme:

How could general polymerase activity have arisen on early Earth? If emergence of the first RNA replicase ribozyme coincided with the origin of life, it would have had to arise in a single step from prebiotically synthesized RNA, without the benefit of Darwinian evolution. Our shortest construct retaining activity was 165 nt, with about 90 nt involved in important Watson-Crick pairing and at least another 30 critical nucleotides (23). Ribozymes with the efficiency, accuracy, and other attributes of an RNA replicase might have to be even larger than this. However, current understanding of prebiotic chemistry argues against the emergence of meaningful amounts of RNA molecules even a tenth this length (1). This difficulty is anticipated by those who propose that life, and Darwinian evolution, began before RNA. Some speculate that in this "pre-RNA world," life was based on an RNA-like polymer, yet to be identified, that possessed the catalytic and templating features of RNA but also a more plausible prebiotic synthesis (1). The pre-RNA life forms presumably later developed the ability to synthesize RNA, facilitating the emergence of an RNA replicase ribozyme, which in turn enabled the transition to the RNA world.

There are other, similar experiments where people have made self-replicating ligases (Paul and Joyce, 2002) or a system of two, cross replicating ribozymes (Lincoln and Joyce, 2009). While the question still remains unanswered, perhaps from all of this you can get a sense of the plausibility.

Not the answer you're looking for? Browse other questions tagged rna polymerase or ask your own question.

6
Current understanding of abiogenesis
4
Is cell-free Life possible?
6
What is the most complex biological organism (or precursors) that we have been able to synthesize from raw materials?