How does the Cuttlefish camouflage itself accurately despite being color-blind?

The reason why the cuttlefish is colour blind is because

it just has one type of cone cell. Humans have three different types, each sensitive to a different color of light. With only one cone type, you couldn’t differentiate between different colors (reference).

A study was conducted in the lab of Dr Lydia M. Mäthger where two different checkerboards were used to test their colorblindness.

1) Gray – Green. One green shade, matched to the maximum absorption wavelength of cuttlefish, was combined with 16 different shades of gray. As supposed some shades of gray couldn’t be distinguished from the green by the cuttlefish, which didn’t adapt the body pattern. Experiment one was successful.

2) Blue – Yellow. A checkerboard of blue and yellow matching in intensity was used for the second experiment. The skin color of the test species didn’t change either and therefore experiment two was also successful (reference).

These experiments concluded that it was indeed colourblind.

To confirm the effectiveness of the camouflage, HyperSpectral Imaging (HSI) was used to measure the colour match between the cuttlefish and its background. Using this technology it was perceived as to how a predator would view a camouflaged cuttlefish. It was found that

Cuttlefish can produce color-coordinated camouflage on natural substrates despite lacking color vision, and that the color aspect of cuttlefish camouflage is highly effective against fish predators. Much of the contrast information (which allows a predator to "pick out" a cuttlefish from the background environment) resides in the brightness (luminance) rather than in the color (chromatic) aspect of the reflected light. What this means is that cuttlefish camouflage strategies take away a tool from predators in their ability to pick out their prey from the background and instead leave them with only brightness as a method for prey identification (reference 1 and reference 2).

And now we get to the main question as to how they do it. Cuttlefish are apparently able to detect the intensity of light reflected from objects in its surroundings. It is able to perceive even a 15% change in contrast. In an experiment, it was found that

The animals did not respond to the checkerboard pattern when placed on substrates whose color intensities were matched to the Sepia visual system, suggesting that these checkerboards appeared to their eyes as uniform backgrounds (reference).

In another bit of interesting research done on the ability to copy the patterns on checkerboards (reference), three inferences were drawn

The first find was that the range (relative to the size of the cuttlefish ‘white square’) for the animal to exhibit disruptive skin patterning had to be withing a certain narrow range. Secondly, given the appropriate size of checker, cuttlefish regulated their disruptive skin patterns according to the contrast between white and black squares. Third, by manipulating the number of white squares on a board to just 4 among 316 black squares (or 1.25 %) produced disruptive patterning, yet increasing the number of white squares to 20, 40 or 80 did not increase the frequency of appearance of the cuttlefish ‘white square’, but only its clarity of expression.

This study shows that the number of white objects in the background significantly influence cuttlefish skin patterns further putting stress on its ability to view the polarization of light (reference). 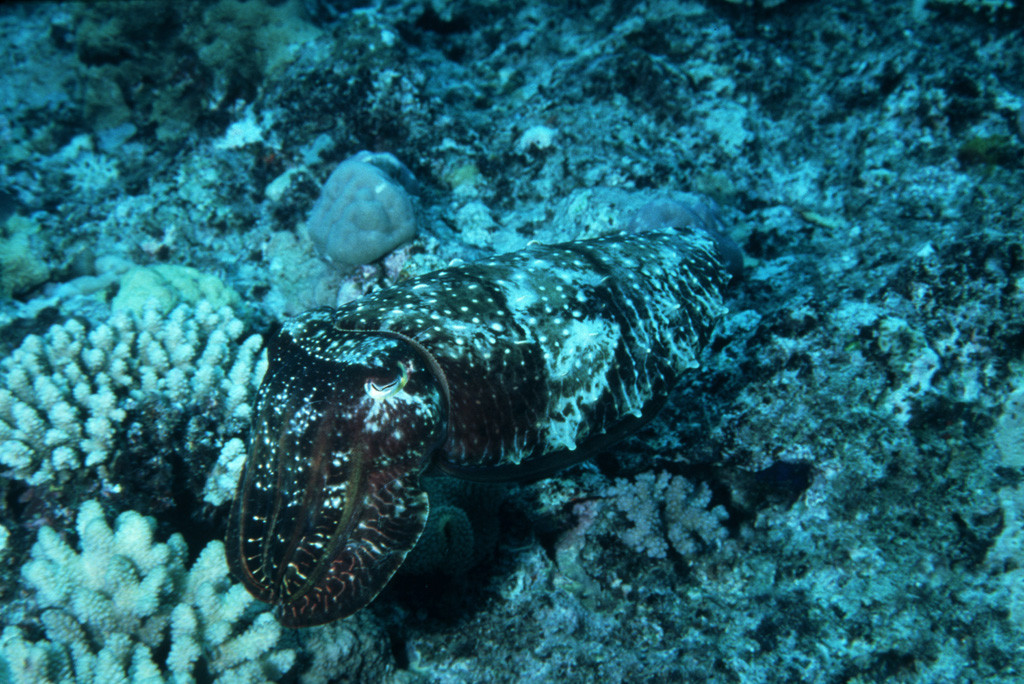 Not the answer you're looking for? Browse other questions tagged zoology marine-biology or ask your own question.

14
How does a jumping spider manage to "jump" on the ceiling?
3
Highly spherical Radiolaria; does this image accurately depict the organism?
15
How does a woodpecker not give itself concussions?
9
Spider identification
15
How many cells does the smallest animal have?
19
What effect does a bat's echolocation have on other bats?
5
What traits make mountain goats so well adapted to mountain living?
39
How does a baby deer stand the day it's born?
1
How does the social structure of lion prides prevent incest?