How can one create images like those in the PDB ‘Molecule of the month’?

I am impressed by the illustrations for the Protein Data Bank ‘Molecule of the month’, e.g. the gorgeous image of DNA Helicase below. Does anyone know how they were made or how one might create something similar? 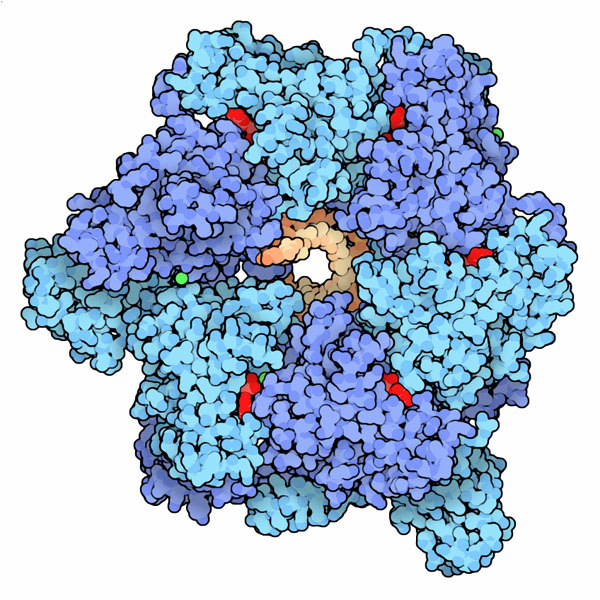 From an interview to the artist:

PDB: How do you create the illustrations?

Goodsell: Most of the pictures are created with a computer program that I developed back when I was doing postdoctoral work with Dr. Art Olson here at The Scripps Research Institute. I've been using this style of illustration--with flat colors and black outlines--for about 10 years now. I like the way that this style simplifies the molecule, giving a feeling for the overall shape and form of the molecule, but at the same time you can still see all the individual atoms. On the last page of each Molecule of the Month--"Exploring the Structure"--I always use RasMol, to give visitors an idea of the kinds of pictures that they can create themselves with off-the-shelf software.

There are good tools around if you want to replicate that look. Although it may take a bit of tweaking (and possibly programming) I would surely give PyMOL and Bioblender a try.

I don’t actually consider these pictures either “gorgeous” or “cool” — they are not to my taste — and I’m not really sure that the question is about biology, but as it has resurfaced after almost 5 years I thought I’d give an answer which explained how one might create something similar, rather than how they were actually made.

The original 3D-graphics program used was RasMol, but as that only runs on Windows, hasn’t been updated for years, and has no viable web version, I would suggest using JMol/JSMol instead. You can either download the application and work with it as described in my answer to a previous question. Alternatively you can just find a web page with a JSMol window (such as a page used in my own teaching material) and use that with the Console available from the JSMol logo. So what I do is: 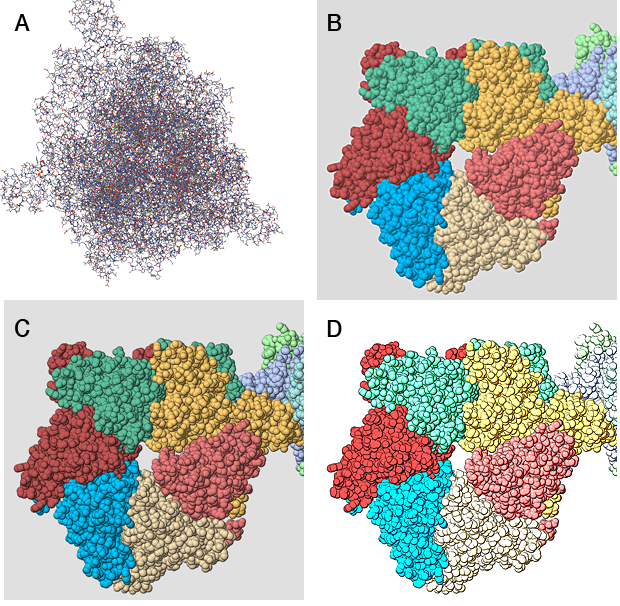 And there you have the final image in D. It doesn't have quite the same posterization as the DNA Helicase illustrated in the question, but if you really wanted that you could experiment.

Not the answer you're looking for? Browse other questions tagged molecular-biology proteins or ask your own question.

2
How do you biologists draw a protein when you write a paper?

3
The use of proteins in memory creation
2
What I can do in order to improve the folding of the protein?
4
Are There Rules for How Proteins Are Formed?
8
How do we find antibiotics?
4
Subset of Protein Crystal Structures (from PDB)
4
Problems with SDS-PAGE, no separation - what could be the problem?
2
How were the first genes isolated from genomic or cDNA libraries without already knowing a hybridization probe?
6
How complete is the information in DNA?
1
What is the best way from remove background signal from a band when doing Western blot image analysis?