Does a top heavy population grow, decline or stabilize?

Imagine a population that has a larger proportion of older individuals than younger ones, what could possible happen to it in the future?

Your question leads to the field of structured population models, and I am afraid the answer is: It very much depends on the exact Leslie matrix!. The population may go extinct, may remain at stable size or may grow indefinitely (theoretically speaking), may increase in size and then go extinct, etc…

This is at least true if you make the assumptions that the rates that govern transitions between age/stage classes (survival, growth, reproduction) are stable over time. Your scenario is explicitly dealing with transitory population dynamics, i.e. it is asking about the population fluctuations that will happen before the age-structured population stabilizes (assuming it does stabilize at some point).

Renaming the matrix and the two vectors you see above it gives: $n(t+1) = M \cdot n(t)$, where $n(t)$ is the vector of number of individuals in the population at each age and $L$ is the Leslie matrix, where the first row gives the fecundity of each age ($f_2$ is the fecundity of the individuals of age class $s$ where the number of individuals is a given time is given by $n(t)$) and the lower diagonal gives the survival probability ($s_2$ is the probability of surviving from age 2 to age 3).

So, basically to answer your question, define your Leslie matrix $L$, define $n(0)$ and iterate (left multiply your vector $n(t)$ several times) to see how the number of individuals change through time.

The right leading eigenvector of $L$ gives the stationary distribution and the associated eigenvalue gives the growth rate $R$. If $0<R<1$, then the population size decreases through time if $R>1$, the population size increases through time. $R$ cannot be lower than zero (see Perron-Frobenius theorem to understand why). Many biologically interesting features can be extrapolated from the Leslie matrix such as the average lifespan or wether you'd better to introduce individuals of a age 1 or of age 2 (for examples) in a natural population in order to prevent its extinction. The sensitivity of the population to change in parameter (such as an increasing mortality rate at lower age due to a new predator for example). You will find more information on the Leslie matrix on the wiki article and on many other websites.

Other ways to model using a Leslie Matrix

Charlesworth (1994) and Caswell (2001) are both excellent books to go deeper into the subject of structured population models, but may be challenging if you lack some background knowledge in linear algebra or population biology.

It's been a time I haven't programmed in R. So, I took the advantage of your question to have some fun and write a quick and dirty code. Below you'll find a R code that allows you to see how the age-specific population size varies depending on your initial vector $n$ and the Leslie matrix. I also add some instructions in order to change the number of age classes (because my code is not very flexible). 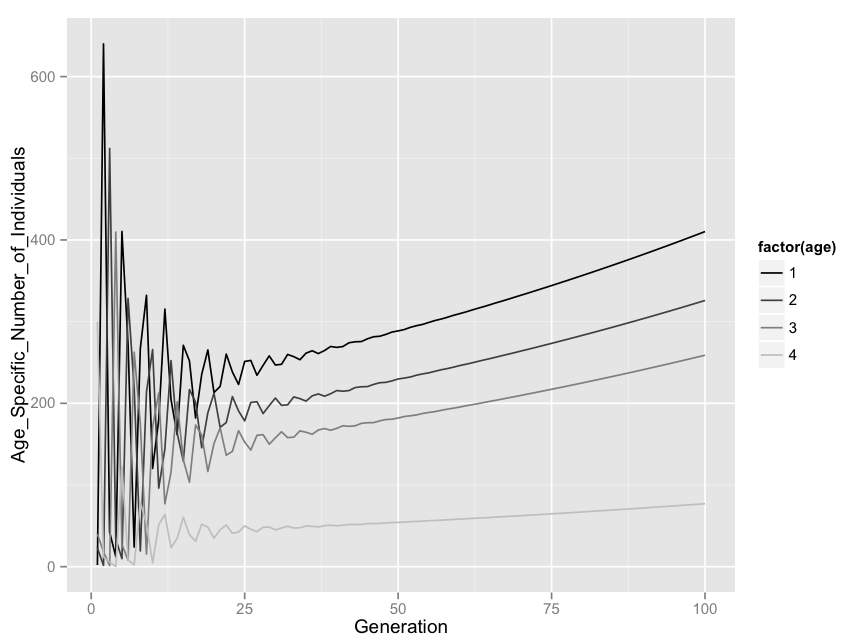 You can see that there are important osciliations in the first 30 or so generations just as expected. Then, the population more or less stabilizes. You also see that due to a survival probability that is different from 1 for each age class, there is necessarily at equilibrium more individuals in age class 1 than in age class 2 and more in age class 2 than in age class 3, etc...

Not the answer you're looking for? Browse other questions tagged population-dynamics population-biology or ask your own question.

10
How does population stability evolve?
4
Does finite rate of increase depend on mortality of individuals in a population?
3
Does a large effective population size result in faster decay of linkage disequilibrium (LD)?
26
What prevents predator overpopulation?
19
Was the recent "conservation hunt" of a black rhino supported by science?
1
Spread of a benign virus in a population over time
0
Does someone know of a website that keeps track of a species population?