Is there any research paper state the pros and cons for human to be taller?

People with Shorter height may outlive Taller ones.

It is a statistically established fact that they are more successful in terms of money, as the study published Journal of Applied Psychology, (Vol 89(3), Jun 2004, 428-441). But, still in the health, the counterpart succeed over the former.

The Effect of Physical Height on Workplace Success and Income: Preliminary Test of a Theoretical Model.

In this article, the authors propose a theoretical model of the relationship between physical height and career success. We then test several linkages in the model based on a meta-analysis of the literature, with results indicating that physical height is significantly related to measures of social esteem (p = .41), leader emergence (p = .24), and performance (p = .18). Height was somewhat more strongly related to success for men (p = .29) than for women (p = .21), although this difference was not significant. Finally, given that almost no research has examined the relationship between individuals' physical height and their incomes, we present four large-sample studies (total N = 8,590) showing that height is positively related to income (β = .26) after controlling for sex, age, and weight. Overall, this article presents the most comprehensive analysis of the relationship of height to workplace success to date, and the results suggest that tall individuals have advantages in several important aspects of their careers and organizational lives. (PsycINFO Database Record (c) 2012 APA, all rights reserved) Source: http://psycnet.apa.org/journals/apl/89/3/428/

Long back in 1975, the relationship between breast cancer and height had been nearly established.

Summary The epidemiological literature on breast cancer is reviewed with particular emphasis on the possible etiological role of nutritional status as reflected by weight and height. The results of a prospective study and preliminary results of a population-based case-control study seem to indicate that body size or body mass rather than overweight (obesity) is a risk factor. A considerable proportion of the differences in incidence between the Netherlands and Japan can be explained by differences in body mass. The biological mechanisms mediating nutritional status and breast cancer are believed to be of an endocrinological- metabolic nature. 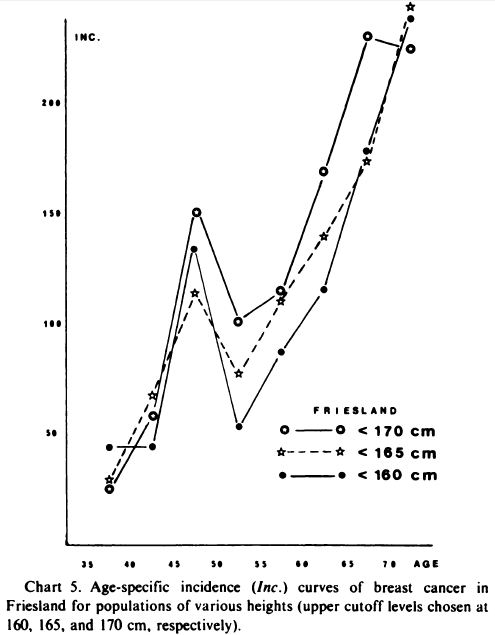 Primarily the investigators started with overweight problem but they have found a better correlation with height. They have concluded:

A further lead to biological mechanisms might be derived from the fact that several endocrine and metabolic functions (e.g., basal metabolic rate and cortisol production rate) seem to correlate better with body surface area than with body weight. The rationale for using surface area is often lacking except for the fact that it is estimated from both weight and height.

Height and cancer risk are fairly clearly linked, with a 16 per cent higher relative risk for every extra 4 inches of height.

The answer may lies in the metabolic rate:

For one, taller people tend to weigh more than shorter people, even if their BMI isn’t any higher. For another, poor nutrition and stress can stunt height growth, and higher calorie diets have been associated with increased height. And that doesn’t even begin to take into account the psychosocial variables like increased income, education, and socioeconomic status.

On the contrary, in a study examining cardiovascular disease risk and height in men found that men who were taller than 6′ 1″ (185 cm) had a 35% lower risk of having a heart attack than men who were shorter than 5′ 7″ (170 cm). Every inch a man gained in height resulted in a 2-3% decrease in heart attack risk. In a study in among, Israeli civil servants, shows height was also associated with lower stroke risk. Taller people are more likely,around 76%, to suffer from recurrent blood clots.