Do all signalling pathways have something that can inhibit them? If the signal pathway is benefitial and it is inhibited would the inhibitor be caused by a biological problem? Are all inhibitors controlled by some subcellular mechanism?

There are some inhibitors in the cell, which have specific effects on signal transduction. These are mostly second messengers (like cAMP, cGMP, calcium ions, inositol 1,4,5-trisphosphate and others), which are then able to diffuse relative fast to other proteins. There they can either amplify a signal or cause inhibiting processes to start which then terminate the activation of the signal transduction cascade. The problem is that these inhibitors that they work unspecific in their inhibition and termination. Signal transduction is tightly controlled as they directly influence the expression of various genes. 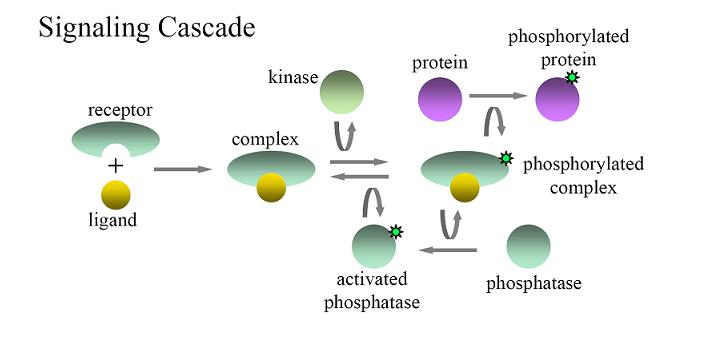 Specific inhibitors for single proteins in the signalling cascades are available as drugs against cancer. Since these signalling cascades regulate gene expression including cell cycle control, they are important targets for dysregulation in cancer. A numer of kinases in the MAP kinase pathway for example are mutated there and constantly active. The so called small molecule inhibitors bind to the protein and inhibit the kinase activity, preventing a permanent signal. See this article for more information:

6
Question about cell signaling pathways (RTK, Jak-Stat, SMAD, etc)
4
How is the growth of benign tumors suppressed?
4
which signalling pathway is involved in cancer?
3
How does the cell regulate different metabolic pathways?
2
Advantage of GCPRs over RTKs or other receptor protein kinases
1
Exact definition of 'convergent' and 'divergence' in cell signalling?
4
Specific examples of signalling pathway using logical 'OR' and 'AND'?
1
Why is inhibition of inhibition (reciprocal inhibition) such a common motif in cell signalling?
1
Are there any online resources for finding the signaling pathways that two proteins both belong to?
0
Is Signal Transduction Unidirectional from the Stimuli to the Final Receptor?