What is the mechanism of monofunctional glycosylases?

I am learning about the base excision repair mechanism. I understand generally how glycosylases work, but I am trying to understand this with much more detail. I found a paper where they write:

Monofunctional glycosylases catalyze the single-step displacement of damaged base via attack of an activated water molecule on c1' of the substrate.

The article referred to in the question is Fromme et al. (2004). I was able to find several proposed mechanisms for the monofunctional uracil-DNA glycosylase but I'll discuss two that seem most relevant in the context of your question.

The first I'll mention was outline by Parikh et al. (2000) who studied recombinant human mitochondrial uracil-DNA glycosylase. They report a mechanism where the glycosidic bond cleavage is not induced by a nucleophilic attack by water but rather by valence electron rearrangement, induced by conformational changes of the substrate by the enzyme, leading to a resonance stabilized oxocarbenium intermediate. This figure shows an electron pushing representation as well as the various stabilizing effects produced by orbital overlaps which favours cleavage of the C-N bond:

Original caption: Structure-based reaction mechanism that resolves the apparent orthogonal paradox for electron transpositions by altering the substrate stereochemistry. (A) A simplified valence-bond representation of the glycosylic bond dissociation hides the paradox that the three electron pairs to be transposed are involved in orthogonal orbitals. (B) In the normal anti-conformation of deoxyuridine, the σ*-orbital involved in the anomeric effect and the π-orbital of the C2⩵O bond are orthogonal to one another, thus preventing orbital overlap. (C) Severe distortions of the deoxyribose and the glycosylic bond in the strained conformation of deoxyuridine enforced by the UDG active center align the pairs of atomic orbitals participating in each electron transposition, thereby electronically coupling the anomeric and σ-πArom effects to promote bond cleavage.

They also go on to say (emphasis added):

A water is tightly positioned 3.54 Å below the deoxyribose C1′ by four hydrogen bonds (Fig. 3B) but is likely a poor nucleophile. Instead, the UDG–DNA substrate structure suggests this water is well positioned to become the 1′-α-OH after dissociation of the incipient deoxyribose oxocarbenium ion from the uracil ring.

Here is Fig. 3B from the article, where the water molecule is the red sphere at the bottom of the image coordinated by four hydrogen bonds:

The next mechanism involves a nucleophilic attach by an activated water molecule and was outlined by Drohat et al. (1999) studying Escherichia coli uracil-DNA glycosylase. Here is the first step of the mechanism: 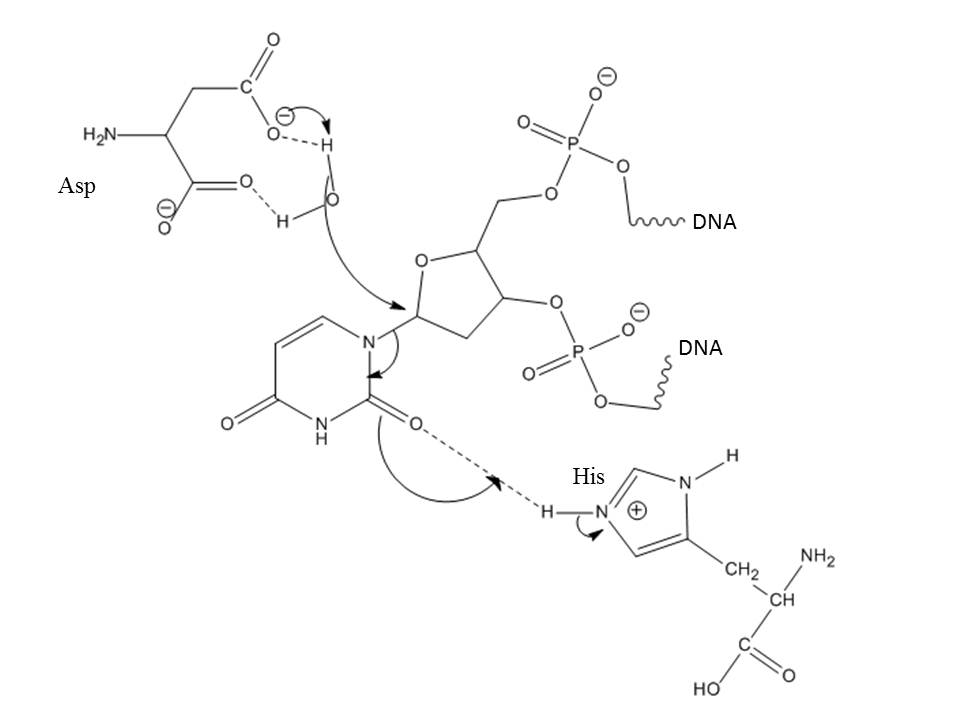 UDG apparently follows a [...] mechanism by deprotonating the incoming water nucleophile using the completely conserved residue Asp64 as the general base. Site-directed mutagenesis studies of the human enzyme support the structural evidence that His187 and Asp64 act as a general acid and base, respectively, because conversion of these groups to leucine and asparagine resulted in 300- and 2500-fold losses in activity (11). However, structural and mutagenesis data alone cannot establish the catalytic roles and ionization states of active site groups; thus other complementary approaches must be utilized to establish a chemical mechanism.

To answer your question, the water molecule is considered activated because it is a better nucleophile due to proton abstraction by the aspartate residue side chain. Thus the electrons used in in the original O-H bond in water (which are polarized towards the electronegative oxygen) are free to attack the partial positive 1' carbon of the deoxyribose. Although it is a concerted mechanism, you could perhaps think of the nucleophile being the hydroxide anion, which is much stronger than water.

So which mechanism is correct you might ask. Well, I don't know, but I refer you to a paragraph from Parikh et al. (2000):

Despite the importance of UDG and the many proposed mechanisms for its catalysis of glycosylic bond cleavage, the structural chemistry underlying efficient catalysis by UDG has remained elusive. Two groups, including our own, have proposed a traditional acid-base catalysis carried out by a cationic His-268 and an absolutely conserved Asp-145 (13, 26). Two proposals (27, 28) invoke only general base catalysis via the same catalytic aspartate and a neutral histidine. Another proposal (29), based on a computationally simulated uncleaved-substrate complex, predicts that Asp-145 is fully solvated in the substrate complex so that it cannot act as a general-base catalyst. These proposed mechanisms are inconsistent with each other and with the uncleaved-substrate crystal structure presented here. Moreover, they are problematic in that they rely entirely on functional group chemistry and thus do not adequately explain UDG's efficiency or the activity of mutants that alter evidently key functional groups (13, 27). UDG mutations that remove apparently key active site functional groups are actually faster enzymes than several wild-type DNA glycosylases (30). Thus, without knowledge of a substrate complex structure, the characterization of UDG mechanism is severely hindered. Here, we present the structures of UDG bound to both uncleaved-substrate analog at 1.8-Å resolution and cleaved-product DNA oligonucleotides at 2.0-Å resolution. These high-resolution cocrystal structures suggest how UDG applies part of the DNA-binding energy to glycosylic bond cleavage by conformationally altering its deoxyuridine substrate to take advantage of stereoelectronic and strain effects in what is then an apparently dissociative process.

To answer your question in brief: an "activated water molecule" is one which is partially deprotonated (in this case... in other cases, partially protonated or metallated). Here, the bond between the water oxygen and one of the hydrogen atoms is partially broken, having been elongated (HO-----H). This is accomplished by a protein residue, which is often a carboxylate-containing residue, such as Asp or Glu in glycosylases. The negatively-charged carboxylate residue acts like a base (called a "general base"), removing the proton from water, thus leaving behind hydroxide ion (OH-). Now, why do all of this? Because water is a poor nucleophile and hydroxide a strong nucleophile. Here, the nucleophile is intended to attack the deoxyribose at C1' after the glycosylase has cleaved the sugar/base - or "N-glycosidic" - bond. This "quenches" the carbocation that forms after losing the base (the "oxocarbenium ion")... because having a strong electrophile hanging around the vicinity of DNA would be bad! Hope that helps!

Not the answer you're looking for? Browse other questions tagged biochemistry enzymes or ask your own question.