How can I tell if regulation is at the transcriptional or translational level?

Translation of the TfR (Transferrin Receptor) is regulated through sequences in the 3′ and 5′ UTRs (untranslated regions) of its mRNA. To study the regulation of TfR levels independently of translational control, we measured the levels of TfR-EGFP expressed from a plasmid lacking the regulatory sequences present in the endogenous TfR mRNA (Fig. 6A). Endogenous and GFP-tagged expressed TfR levels were reduced equally in response to Rabenosyn-5 depletion, ruling out an effect of this protein on transcriptional or translational control of TfR expression.

I believe I understand that the effect can not be post-translational, since TfR-GFP has no region for translational regulation and so it cannot be regulated by any translationally active regulating factor.

My question is: Wouldn't the statement above, that Rabenosyn-5 has no effect on protein transcription, require a proof that mRNA levels are not affected by this protein? 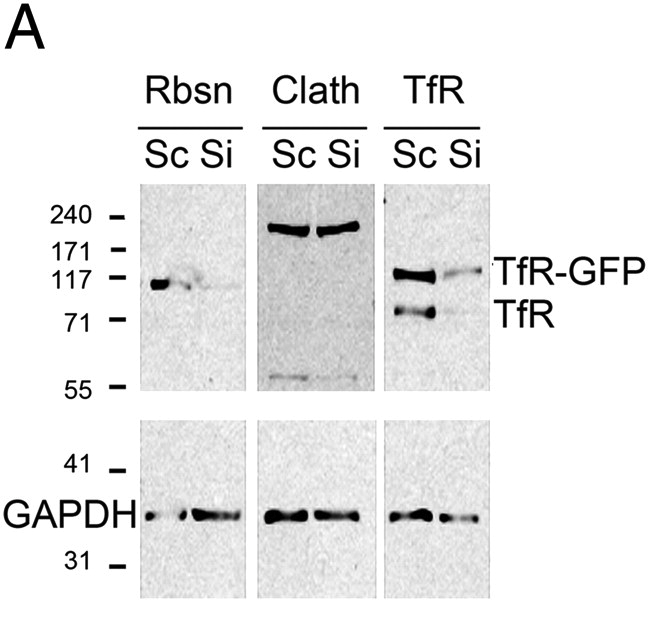 From the Methods section:

Human TfR in plasmid cDNA was a gift from Tim McGraw (Weill-Cornell Medical College, New York, NY). Human TfR cDNA was subcloned in frame with EGFP in the Clontech pEGFP-N1 vector at the XhoI and BamHI restriction sites.

This TfR-GFP fusion protein does not have the endogenous TfR promoter. So it is not likely to be regulated by any TF that would directly regulate TfR transcription.

So they conclude that Rabenosyn-5 does not specifically regulate TfR expression.

Not the answer you're looking for? Browse other questions tagged transcription translation or ask your own question.

12
How does the stem-loop cause intrinsic transcription termination?
7
Does the MS2 RNA binding protein have any translational repression effects?
15
How does translational coupling work in prokaryotes?
5
tools to reconstruct the transcriptional regulatory circuits?
12
How did the genetic code evolve?
2
How are the correct tRNAs transported to the ribosome?
6
How can promoter binding sites be determined?
1
How does the tRNA recognise the first methionine during translation?
1
How to find the amino acid in the DNA protein