How does the frequency of a visual stimulus affect the steady-state visually evoked potential?

I want to design a project for EEG signal processing. In my research I found the concept of SSVEP. SSVEPs represent the electrical activity of the brain as measured via EEG, and are evoked by visual stimuli with low frequency applied to the eye.

My question is whether it is known how the electric activity of brain will change? And a second thing, does it mean that each frequency applied to the eye has a fixed reaction for the brain?

Background
The simplest form of steady state visual-evoked potentials (SSVEPs) are those to flash stimuli. Herrmann (2001) studied the SSVEP by recording the EEG from the visual cortex at various flash frequencies. He found that SSVEPs occurred at a frequency corresponding to the flicker stimulus. Amplitudes decreased steadily with frequency and SSVEPs could be recorded up to ~90 Hz flicker frequencies. The shape and frequency following of SSVEPs are shown in Fig. 1. 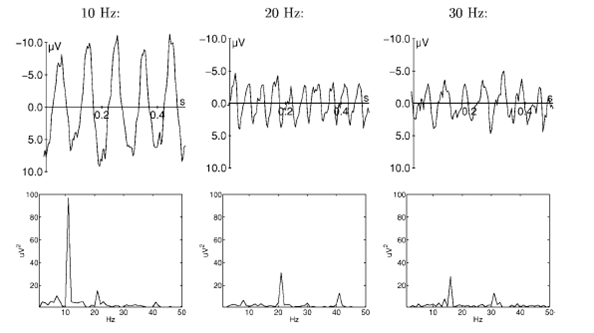 Interestingly, SSVEPs in response to some frequencies showed resonance phenomena, indicating a selective frequency preference of the neural oscillators. Specifically, SSVEPs at around 10, 20, 40 and 80 Hz resulted in higher amplitudes than stimuli flickering at adjacent frequencies (Fig. 2).

Not the answer you're looking for? Browse other questions tagged brain vision experimental-design electrophysiology electroencephalography or ask your own question.

15
Effect of pupil responses on the electroretinogram
8
What does pain look like in wave form?
5
How's the membrane potential restored to resting state after hyper polarisation?
4
Continuous EEG: Where does pronounced power peak at 38 Hz come from?
6
What would happen if you “rewired” your eyes with your nose?
4
Can you extract specific data from EEG
0
Do nerves work as I think they work and what does that mean for our senses?