What limits the speed of human perception?

I'm writing a novel in which the main character's perception and thought processes are sped up considerably, in essence slowing down the world around him. To others, it seems like his reactions are far faster than normal. Of course, there's a fantasy explanation for this in the story, but it led me to wonder exactly what limits the speed of human perception and reasoning in the real world.

It is defined as the frequency at which an intermittent light stimulus appears to be completely steady to the average human observer.

In 1824, Peter Mark Roget (who also wrote the famous Thesaurus) first presented the concept of "persistence of vision" to the Royal Society of London, as the ability of the retina to retain an image of an object for $\frac{1}{20}$ to $\frac{1}{5}$ second after its removal from the field of vision.

A second principle - the $\phi\ phenomenon$ or stroboscopic effect is closely related to flicker fusion. It was first studied by Max Wertheimer and Hugo Munsterberg between 1912-16. Wertheimer and Munsterberg found that subjects can perceptually bridge the temporal gap between two consecutive displays, so that a series of static images appear as continuous movement. The discovery of flicker fusion became the perceptual basis for moving pictures, television, and all media based on stroboscopic presentation of stimuli.

The minimal frequency at which flickering stimuli appear continuous is called the critical flicker frequency.

This critical flicker fusion threshold depends on the stimulus’

Physiological evidence in humans and monkeys shows that flicker rates above the perceptual critical flicker frequency threshold can nevertheless generate cortical and subcortical visual responses. Thus the temporal integration underlying flicker fusion does not occur at the level of the retina, but must take place later in the visual hierarchy. Single-unit recordings in the primary visual cortex of primates suggests that, for two brief-duration targets presented in close succession, the after-discharge to the first target interferes with the onset-response to the second target (Macknik, 2006) (see Figure 5). The onset-response to the second flash is absent for inter-stimuli intervals of 30 msec or shorter (equivalent to 17 Hz periodic). If the flashes are separated by more than 30 ms, the after-discharge to the first flash and the onset-response to the second flash begin to recover (i.e. equivalent to <17 Hz flicker). These intervals roughly coincide with the critical flicker fusion threshold in humans for 100% contrast stimuli in the fovea .

This suggests that perceptual flicker fusion may be due to the lack of robust transient responses to the flickering stimulus.

What is the Different speeds of Visual Perception? 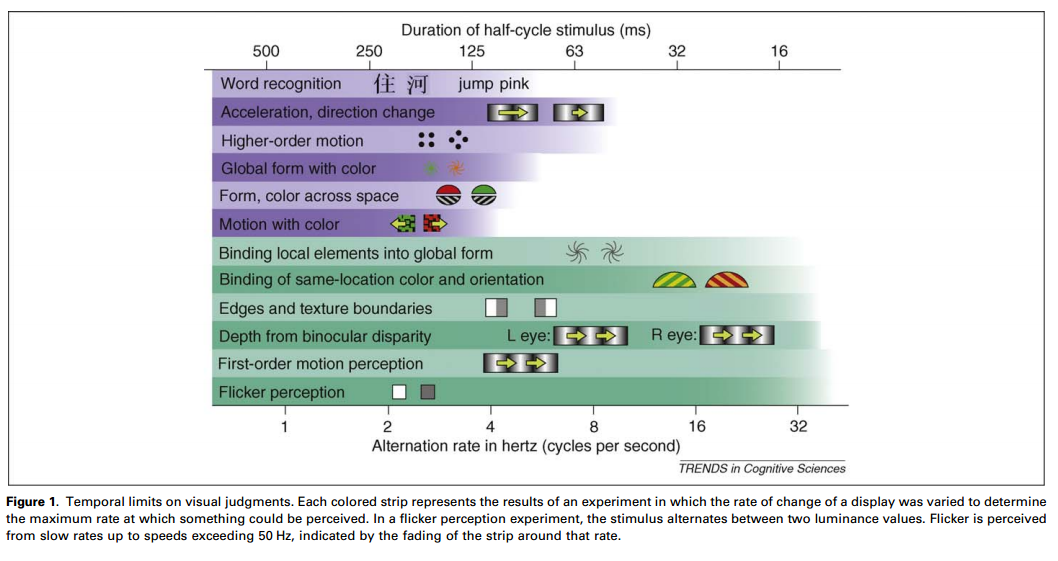 Experiment: A moving sinusoidal grating with bright peaks and dark troughs is seen through a window.

Result: Even when its velocity is so high that 30 of its bright peaks pass each location per second (30 Hz), observers still perceive its direction of motion. 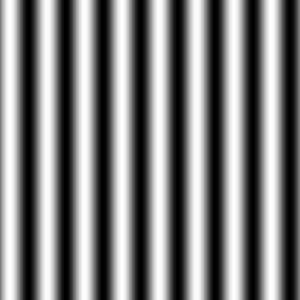 Experiment: Two identical gratings, one in each eye, are viewed through identical windows.

Result: One is spatially shifted relative to the other, introducing a binocular disparity that is perceived as depth. Even when they move at a 30 Hz rate, the depth is still perceived. If the input to depth mechanisms were blurred at a >30 ms timescale, detecting the depth would be impossible at this rate.

Experiment: Against a gray background, a field of white dots is adjacent to a field of black dots.

Result: Both fields are set in rapid alternation between white and black, but out of phase – when one is white, the other is black. The conspicuous boundary between them is perceived even at fast rates of 30 Hz, whereas at faster rates the black and white are averaged by the brain into the same color as the background.

Binding of color and orientation sharing a spatial location

Experiment & Result: If a red, right-tilted patch is alternated with a green, left tilted patch, it is easy to distinguish from the complementary pairing of red left alternating with green right, even at fast 20 Hz rates.

Binding of form and color across space

Alternating color-shape pairings can only be reported at rates below ~3 Hz.

Binding of global form with color

At alternation rates faster than several a second it is very difficult to determine the shape color pairing even though the shapes and colors themselves are easily identified.

A moving stimulus alternates between two speeds (acceleration) or two directions. When the alternation occurs faster than several per second, these changes are unperceivable. Its limit is 8-10 Hz.

Certain pairs of words (such as ‘jump’ and ‘pink’), when alternated in the same location, cannot be distinguished from another matched pair at rapid rates as one perceives only the sum, which is the same for both pairs. They can be distinguished only at rates slower than several items per second.

The limitations are of several natures: cognitive once the signal has arrived in the brain, but also physical within the eye e.g. for vision.

For vision, the crucial bit is to transform changes of incoming light into an electrical signal. It is not completely elucidated. Recent research shows e.g. that for some flies, there may be a mechanical intermediate stage: the light-sensing cells react by contracting, and this would modify the electric resistance of their membrane. I don't think it is known whether the human, who have less need for a fast response but want more detail of what they're looking at, have the same mechanism or not: maybe your hero has something of the fly that we don't have?

Here's a paper on the link between perception and reaction time. The general theme in biology is that the greater number of neurons an animal has in series, the more latency that animal will have in that pathway. This can partially account for organisms which have tiny nervous systems and very quick reflexes.

In our own body, we have reflex pathways which entirely circumvent our brain. These help us maintain our posture and remain upright. These are muscle spindles and spinal reflexes. They are among the quickest response mechanisms.

Most of our movements are variations on muscle memories, mediated by the cerebellum. You can start your research on muscle memory here. Developing muscle memory is a rigorous process, but is a fundamental learning tool for musicians and those in martial arts.

Not the answer you're looking for? Browse other questions tagged perception or ask your own question.

54
Human perception of time depending on age
9
What part of the brain controls depth perception?
4
Is tactile perception two-dimensional or three-dimensional?
7
What is the science behind the inaccurate perception of colors?
1
Does the nature of nervous impulses give us a finite number of things we can perceive?
3
Surface perception