Human body density is approximately 1 kg/l (same as fresh water) - which is not surprising (at first) given that we are 70% water, and is surprising (on a second thought), given that the other 30% can be just about anything (from the air in the lungs to the relatively heavy bones).

How remarkable is that?

Consider other mammalian species. For each species, compute the average body density of an adult. Thus, for each species we have the number - the mean body density. How are these numbers distributed? Mostly heavier than water? Lighter?

It is unlikely that this kind of research has been done, so I would settle for something simpler: what are the densest/lightest mammals? (or, in general, vertebrae)

PS. As you can guess, I am a mathematician, not a biologist :-)

PPS. Given abundance of water of Earth's surface (70%, same as above!), it makes a lot of sense to be as dense as water: not heavier (to avoid drowning), not lighter (to be able to dive for food), so natural selection should favor the density of 1. Are there exceptions?

Until someone has a better method to determine this, and I'm willing to go with idea of that this question is not answerable, I put forward the two likely forms of selection criteria:

I also want point that measuring the density of mammals is tricky because we can change our "volume." Perhaps this doesn't seem like much for humans, but a small mammal with a large tongue stuck out could have an appreciable different density than one with the tongue in. Same for retractable limbs (which are generically cool).

This article gives us an estimate for the density of keratin at "1.283 g/c.c. for cow horn to 1.335 g/c.c. for echidna quill tip" which putts it solidly more dense than water. This means we're looking for a small heavily armored mammal, which leads me to suspect the pangolin. I don't readily know it's density, and I would be fine with others taking the time to calculate it (I'm not interested in getting that specific).

I have fewer ideas on which mammals are least dense. Going by this article I would guess rodents have the least dense skeletons. In particular I was surprised by this graph: 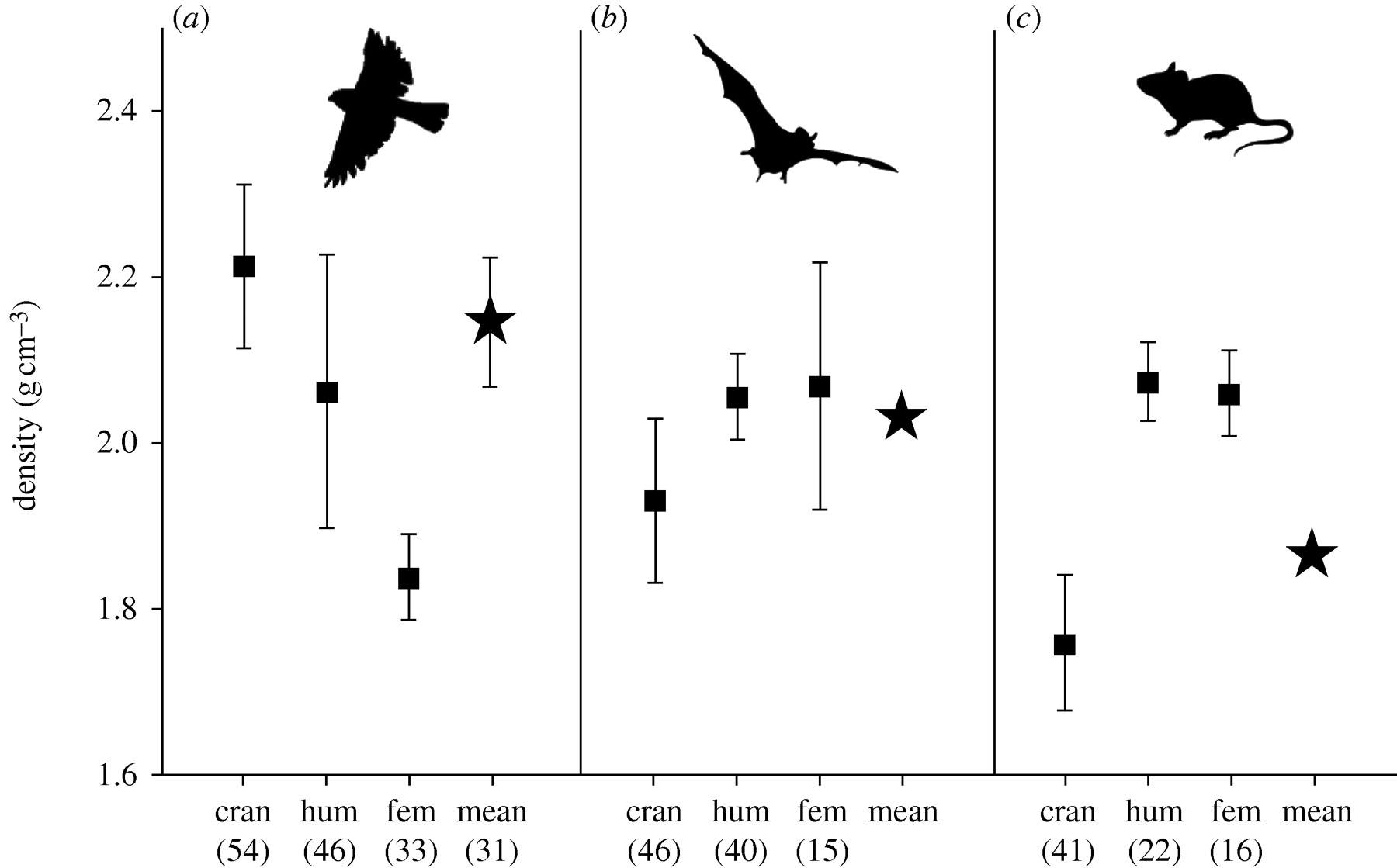 But also don't know that means we should exclude something like a sperm whale which has a lot of fat (lower density than water) and has enough lung capacity to dive for hours in deep water. But on the off chance that the skeletal density is the best bet, I'm going to guess the least dense animal is a rodent, and if I have to pick one species I'm going with the least massive, the shrew.

Doubt any one has really researched the displacement of many of the animals that should be in the running for this, so I'm not convinced a more exact answer could be reached.

6
How compatible are mammal wombs?
13
Why is mammal coloration so dull?
6
What is the fastest marine mammal?
8
What species is this mammal?
2
How to determine externally that a whale is a mammal?
3
Mammal vs Placental Mammal
4
Identification of a small mammal
9
Identification of a mammal in cage
3
Was mammal body better suited for some type of the marine environment than the body of fish?
8
Do individual mammal hairs absorb water?