Why was the Davson-Danielli model rejected?

According to my textbook, Davson-Danielli's model of a phospholipid bilayer sandwiched between two layers of globular protein was incorrect. The nonpolar protein portions would separate the polar portions of the phospholipids from water, causing the bilayer to dissolve. Meaning, the Davson-Danielli model is not only incorrect, but it is also impossible.

I understand why the model is incorrect, but not why it is impossible. In my view, the nonpolar proteins would remain together in a micelle shape due to hydrophobic exclusion. Because of this, the phospholipid bilayer sandwiched on the inside would remain isolated from the water.

Why would a bilayer dissolve if the proteins were in contact with water and the phospholipids were isolated from the water?

I think that my confusion stems from many misunderstandings about the chemistry and structure of the cell membrane. In depth illustration of the error that my book mentioned would be most helpful.

The original figure that Danielli and Davson proposed looks like this (from the original publication): 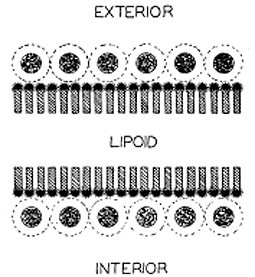 It shows the phospholipid bilayer of the membrane (which is correct) embedded between two layers of globular proteins. The hydrophobic tails of the lipids are orientated towards each other, while the hydrophilic heads are oriented to the outside.

Although the membrane composition is correct (this was already published 1925 by Gorter and Grendel), there are some problems with the proposed model:

Problems with the davson danielli model : 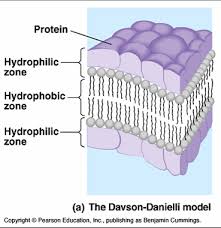 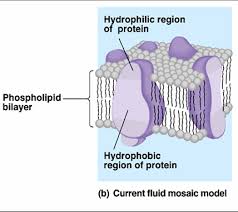 improvements in biochemical tech allowed people to extract proteins from the membranes. They were different sizes and globular in structure.They were unlike the type that would form continuous layers on the periphery of the membrane. Proteins were hydrophilic in nature and hence should have been attracted to the tails and not the heads.

lekhalekha
1
$\endgroup$
Add a comment  |
Highly active question. Earn 10 reputation (not counting the association bonus) in order to answer this question. The reputation requirement helps protect this question from spam and non-answer activity.

Not the answer you're looking for? Browse other questions tagged cell-membrane history or ask your own question.

4
When was the purpose of bone marrow discovered?
5
Who was the first to talk about evolvability?
5
How was the Huntington's disease gene's location found?
9
How was the resemblance between apes and humans explained in pre-Darwinian biology?
5
Why is E.coli used as a model?
9
Why don't phospholipid bilayers dissolve?
11
What was the first piece of work in computational biology?
6
Did early 20th century researchers state why they used E. coli as a model organism?
1
Did Mendel believe that proteins are hereditary substances?