How many agarose gel bands are typical for circularised DNA

What are these various conformations? 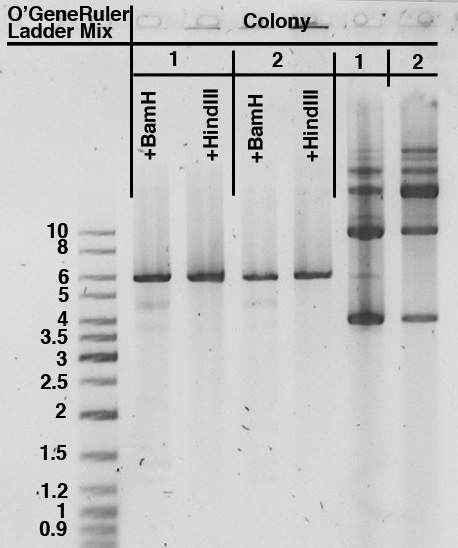 dna gel-electrophoresis plasmids
Share
Improve this question
asked May 1 '12 at 11:58

I don't have hands on it, but I will not be surprised if supercoiled DNA migrates at different distances according to some inner topological conformation (i.e., more or less coiled AND/OR more or less nicked). Similarly, this picture highlights >8 conformations. What is run in the gel is circularized phage DNA with some degree of knotting due to the circularization (phage DNA is otherwise linear).

Another theoretical possibility is that two or more plasmids of different sizes were grown in the same maxiprep because of some contamination. But in this case, you will spot the problem also in the digestion, so it does not seem to be your case.

Gianpaolo is correct that you are seeing the different conformations of circular DNA.

I would conclude from your picture the following:

If these are important samples, I would consider purifying them using cleaner methods, for example using a column.

I think these answers have all missed the most likely explanation of the multiple bands in the uncut sample. I agree that you are likely to see supercoiled, linear and relaxed (open) circles in that order going up the gel. But then all of those higher forms are the same thing being repeated for dimers, trimers etc. formed by recombination between plasmid molecules. So, for example, I think the 10 kb band in the uncut lanes is a supercoiled dimer. I have a dim memory that you see more of this sort of thing if the DNA is prepared from a recA strain of E. coli.

update Here is someone who I think would agree.

Not the answer you're looking for? Browse other questions tagged dna gel-electrophoresis plasmids or ask your own question.