Is there any relationship between heartbeat rate and life span of an animal?

Is there any relationship between heartbeat rate and life span of an animal?

Do they belong to a cause-and-effect relationship or are they both caused by some phenomenons or a common cause?

Interestingly there is a inverse negative correlation between heart rate and life span, meaning the faster your heart rate is, the shorter is your lifespan. See this figure (from the paper 2 cited below): 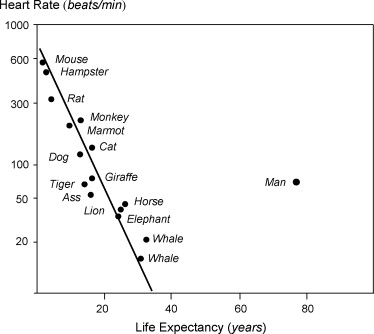 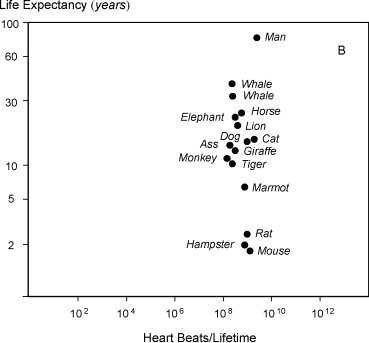 So it seems that at least the hearts in mammals have a maximum number of strokes they could do. The obvious question what causes this phenomenon is not really answered. Since the metabolism of small animals is (compared to their weight) higher and also their oxygen consumption is higher because of that, it is hypothesized that this causes more reactive oxygen species and related damage which subsequently leads to an earlier death.

See the references for more details:

There is a relationship: they are negatively correlated. Shorter-lived animals tend to have faster heartbeats, and longer-lived animals tend to have slower heartbeats. It gets more striking than that, however: they aren't just negatively correlated, they're approximately inversely proportional. A mouse, and an elephant, will both have around 1.5 billion heart beats before they die.

Poetic as this is, the relationship probably isn't causal. It's not that you have a given number of heartbeats, and when you use up your last one your heart dies of exhaustion. That would be silly.

It is illuminating to view the invariance as emerging from how both heart rate and lifespan scale allometrically with body size ($mass=W$).$^1$ Larger animals tend to have slower heart rates, and also tend to live longer; both relationships are in the form of power functions, whose exponents are multiples of $1/4$.

"Total number of heartbeats in a lifetime" is just the product of heart rate and lifespan. As such, it should scale as

That is: if $R$ and $E$ scale in these ways - which they do, approximately, within many taxa - then their product $R \cdot E$, the total number of heartbeats in a lifetime, will be approximately invariant.

The question is why they scale in this way; and, beyond that, why the exponents in rate and time allometries are so ubiquitously multiples of $1/4$.

tl;dr: There is a striking negative correlation - specifically, an inverse proportionality - between heart rate and lifespan. But there's no particular reason to think it's causal, and both also correlate strikingly with a million other things. A lot of this has to do with how things scale with body size. Such scaling is called allometry; allometries are often power functions; for biological rates and times, the exponents of these power functions are often multiples of $1/4$ (as opposed to eg. $1/3$ or $1$). This quarter-power ubiquity in biology used to be mysterious, but now has been given an explanation (at least for the scaling of metabolic rate, which intuitively could do part of the explaining for other rates) by the West, Brown & Enquist model as being the result of optimally efficient resource delivery in fractally branching transportation networks.$^1$

The Heartbeat hypothesis is silly; presumably the approximate invariance of "1.5 billion heartbeats in a lifetime" comes from the $M^{-1/4}$ and $M^{1/4}$ scaling of heart rate and lifespan, themselves occurring for some other reason. I don't know but I assume the fractally-branching bloodstream explains the heart rate allometry. The lifespan allometry is more mysterious. It was once commonly thought to follow directly from the mass-specific metabolic rate allometry (Rate of Living theory), but that theory has fallen on hard times.$^2$ It has been given other potential explanations, notably the Charnov model which suggests that low mortality rates result in selection for a later age of maturity, giving animals more time to grow large.$^3$

Not the answer you're looking for? Browse other questions tagged zoology cardiology or ask your own question.

7
What's the difference between a plant and an animal?
29
Extremely rare occurence of Heart cancer?
2
To what extent do domestic animals understand language?
5
How does strength of a pulse related to EKG(ECG)?
7
Identify this smooth-cocoon worm from Southern India
48
Are there any animals that are both poisonous and venomous?
7
Are there any animals that get smaller as a normal part of their life cycle?
0
Why swordfish aren't put in the same family as Marlins?