A number of companies have started marketing LED lamps that can be switched to a red mode. The claim is that red light is less harmful to one's night vision. Given that our eyes are less sensitive to red light, though, I'm not convinced that that red light is any better than dim white light. So if "equivalent" luminosity is defined where it's equally easy to, say, read a book in both light types, is there some physiological reason that red light is better than the equivalent white light?

This is a very good question. Red light is routinely used by scientific laboratories to do low light dissections of retinas, and of course it is used in other low light contexts such as printing plate development.

In both of the above contexts, you have a clear subject: the retina being dissected or the printing plate being developed. In the case of the printing plate the film has been designed to be specifically non-reactive to red light, so red light is used because your eyes can see it, but the film doesn't react to it. Similarly in some scientific settings it makes sense to use red light during dissections. Mice lack a long wavelength opsin, and therefore using a dim red light allows the experimenter to have a relative sight advantage compared to the mouse when keeping the mouse dark adapted.

But in the case you're asking about, there is no film or animal to serve as a second party. So is there any intrinsic advantage to using red light? As it turns out, there is. The fovea, which is in the center of our eye and used for high acuity vision, has no rods and primarily L- or red sensitive cones. Note the high density center area which lacks blue sensitive cones and has 2:1 red to green cones. 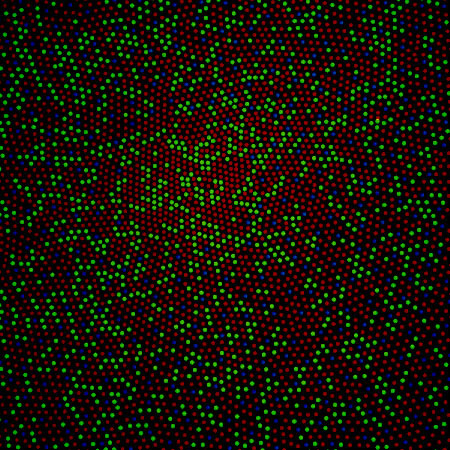 So by having red light present, you stimulate this area. But red light is present in white light, too, why not just use that? Leonardo's answer comes the closest, but it's a little off. Red light is used because it preferentially stimulates L cones more than rods, but you are definitely not able to preserve night vision by using red light. Why not? Well it may look like it is possible to exclusively stimulate cones from the chromatic sensitivity figure 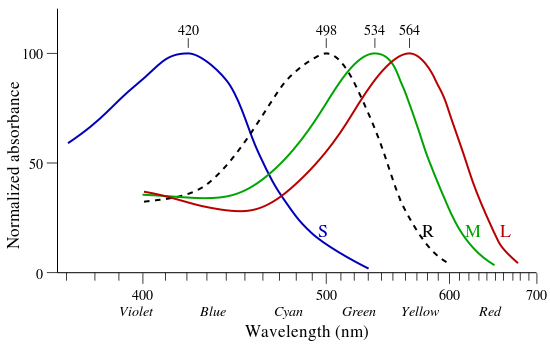 But that figure is 1) normalized and 2) not indicative of synaptic signal processing. 1000's of rods can converge onto a single ganglion cell, where cone convergence in the fovea can be on the order of a single cone per ganglion cell. When it comes to perception, in order to compare the black rod line above with the red L-cone line you'd have to magnify it dramatically in size. Practically speaking, it is nearly impossible to stimulate cone pathways without stimulating rod pathways when using a relatively broad spectrum LED that you're powering with a battery. Maybe with a high power infrared laser.

So the purpose of using red light is to attempt to balance the activation of high sensitivity (red insensitive) rods with that of the low sensitivity (but red sensitive) cones in the fovea. While using a similar level of rod activation with blue light, you would perceive a "blind spot" where your fovea is.

Finally, instrinsically photosensitive cells (the melanopsin cells brought up) do not factor into this processing. These cells are activated only with extraordinarily bright levels of light, and the therefore do not enter into conversations dealing with night vision. 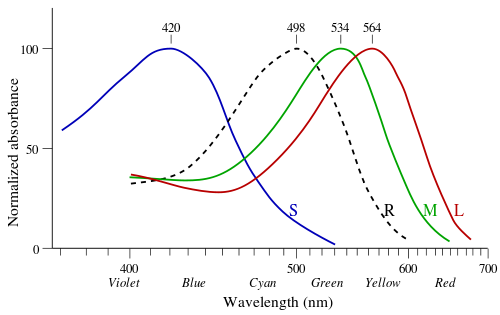 If one is exposed to red light (above ~650 nm), it would activate the L-type cones mainly (possibly some M-type activation), but no rod activation. Rods are the low light receptor cells in our eyes, and as such, are very sensitive to the photon density, or brightness, entering the eye.

This is just my speculation, but I think it's plausible that if you were in a completely dark environment with just a red light, filtering out the higher frequencies, night vision could be spared in the sense that we don't activate the rod cells.

Another reason why red lights are now sponsorized for night illumination is because they are supposed to be safer in terms of interference on the circadian cycle. This is not related to better vision, but better health.

The mammalian eye senses the light by the conventional rode and cone cells. However, a third light-sensing cell type has been recently identified. This third light-sensor is based on melanopsin-positive cells. While rod and cone cells respond best to white, full spectrum light, melanopsin cells only respond to a specific bandwidth of blue light, in the range of 446-477 nanometers. These cells connect and regulate brain centers responsible for circadian rhythms. Therefore, during the night, blue-light exposure might interfere with circadian rhytms facilitating the onset of depression and other metabolic derangements associated with circadian cycle see another SE question. White light contains also blue light, while red light does not. This is apparently the rationale to claim that red light is less harmful. However, no clinical evidence is available to my knowledge, and the threshold of blue light required to stimulate melanopsin receptors is probably over the common night illumination.

As mentioned in the other answer, red light does not affect the melanopsin receptors in eyes. These receptors not only regulate body rhythm but also regulate the diameters of the eye pupils. Once they are stimulated, the eye thinks that there is enough light around and the pupils get smaller to protect the eye against over-exposition, which reduces sensitivity.

Yes red light is useful IF and only if >650 nm. Some of the answers above are close, but they miss the issue because they used the same scale for rods and cones which they are not on. Rods are several orders of magnitude more sensitive than cones and hence why the graphs above make it look like they have no sensitivity out to 700nm, they actually do, just not nearly as much.

Look up photochromatic step. It explains why >650nm works and it is well documented.

When I was in the Navy in 1957, I was an ECM sensor operator on a P-2 Neptune maritime patrol aircraft, originally built in 1941. We flew 11-hour patrols low over the ocean. At night all the pilot's Gage's and controls were illuminated with red light. The flashlights we had were equipped with red lenses. Most WWII aircraft were equipped the same way! For some reason, the red light-night vision theory was obviously the belief back then. Lieutenant Rudy Jopp, USN, Retired.

I think the most logical and simplistic scientific test in this situation would be application. Buy red yard lamps and white yard lamps. Set up a various objects in the yard that would be increasingly harder to see in the dark (like a vision test where the letters get small but your distance is static.)

Sit outside with no light for an hour, more if you want, and then pick out the objects. This is your constant, what you will compare your results to. Repeat at least three times making note of which objects you can see.

Repeat this with each lamp, exposure for the exact amount of time as you waited in the dark. Both lamps should give you the same level of visibility, for accuracy. Take note of how long it took to be able to clearly see each object. I recommend a buddy out of your vision to keep track of time so you don't spoil the excitement by introducing light source.

Compare the results and you will know which light source affects your night-vision more.

9
Why is maintaining a circadian rhythm important?

4
Does retinal detachment happen more frequently at night?
10
Why does a light object appear lighter in your peripheral vision when it's dark?
11
Why can I see a light flicker when it's in my peripheral vision?
9
Why does my eyes see a red spot when over exposed to light?
13
Can "red" cone cells actually see much red light?
4
Role of the pupil response in night vision