I've stumbled upon a table comparing the sensitivities of different detection methods in NMR spectroscopy: "Direct", "DEPT" and "Inverse", where "Inverse" seems to be the most sensitive. 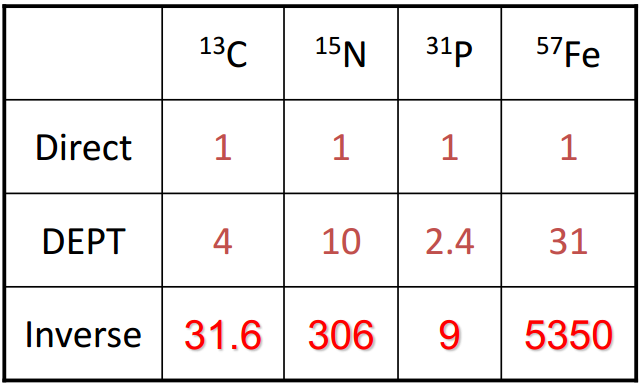 What exactly are those different methods are and how do they differ?

In most cases when you perform NMR experiments on proteins you detect the signal on the protons. Even if you're looking at other nuclei, in the end you transfer the magnetization to a proton and detect that signal. This is simply the most sensitive method due to the high gyromagnetic ratio of 1H, and this is the method that is labeled "inverse" in your figure. This is pretty much the default way to measure heteronuclear spectra.

Direct detection means that you directly observe the less sensitive nucleus like 13C. This has certain advantages especially for large proteins where you often have to deuterate the protons to be able to measure anything useful.

DEPT is a type of experiment where magnetization is transferred from the directly attached protons to the heteronucleus. This increases the sensitivity and allows to distinguish CH and CH3 groups from CH2 groups

Not the answer you're looking for? Browse other questions tagged biophysics protein-structure methods spectroscopy or ask your own question.

7
RMSD during conformational transition in proteins
4
Are There Rules for How Proteins Are Formed?
1
Is galvinoxyl antioxidant assay possible using NMR spectroscopy?
0
Why is nitrogen isotopic labelling required for protein NMR?
3
What are the applications of predicting the structure of proteins?
3
Is there a reason for the lack of full RTK structures?
2
Questions about Cohesin - what does the ATPase domain do, and any suggested PDBs to look at?