Premise of life cycle synchronization between predator and prey

While reading about the predator satiation hypothesis of the periodical cicadas' 13/17 year life cycles, I started wondering about its premise. By the way, I understand the math behind the prime number life cycle. 13 and 17, being prime numbers are only divisible by themselves and 1, and thus have as few divisors as possible. But my question is about the premise of why a predator would even want to synchronize its life cycle with a divisor of the prey's life cycle in the first place.

If the predator has a set life cycle, but its individuals are evenly distributed in regards to their development within that life cycle at any given time (for example there could be roughly even amounts of mature and immature predators at any given time), then what difference does the life cycle make? Here I am assuming that eating cicadas is most beneficial to a specific developmental stage of the predators, which is the only reason I can think of why there would be an advantage to this synchronization. By the way, is this even a correct assumption in regards to this hypothesis?

To be clear, my main question is why life cycle synchronizations between predator and prey matter when/if predators aren't all undergoing the same stages of their life cycles simultaneously.

edit: To be even more clear, I am asking what the benefits are to the predator to synchronize its life cycle with the prey (the cicadas, in my example).

My reference: Wikipedia says the following: *It was hypothesized that the emergence period of large prime numbers (13 and 17 years) was a predator avoidance strategy adopted to eliminate the possibility of potential predators receiving periodic population boosts by synchronizing their own generations to divisors of the cicada emergence period. Goles, E.; Schulz, O.; Markus, M. (2001). "Prime number selection of cycles in a predator-prey model". Complexity 6 (4): 33–38. doi:10.1002/cplx.1040.

New Answer, based on first comment by user2686410 and subsequent edits to the question.

First, the overall goal of Goles et al. (2001) does not seem to test hypotheses related to the evolution of life cycles in the cicadas per se. It seems their overall goal instead may have been to explore the generation of prime numbers from numerical theory, using biologically-based models. For example, from the abstract they state,

The model marks an encounter of two seemingly unrelated disciplines: biology and number theory. A restriction to the latter, provides an evolutionary generator of arbitrarily large prime numbers.

and at the end of the discussion they write,

Although there are traditional methods for prime number detection (see e.g., Ref. 23) that are faster than the methods presented here, it is remarkable that the generation of prime numbers can be performed using a biological model.

To more directly address your question and if I understand their models, Goles et al. (2001) do seem to allow the the life cycles of both predators and prey to co-evolve yet this is not always clear.

Here, they seem to be saying that the life cycle of one (predator or prey) can change while other other remains constant (prey or predator). The life cycles don't coevolve. Subsequent formulas and statements imply an interactive effect between the predator and prey life cycles. (Honestly, their writing is somewhat opague to me and they do not define all of their mathematical terms, making it difficult to follow the logic of their models.)

Regardless, the results of their initial models, shown in the figure below, shows the prey converging on a 17 year life cycle while the predators converge on a 4 year cycle. Somewhat more complex models tended to converge on 13 and 17 year cycles, although other primes like 11, 19 and 23, had similar probabilities of evolving. 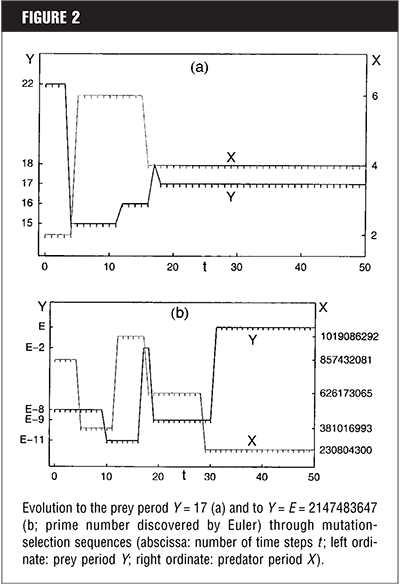 Goles et al. (2001) admit at the outset of their paper that there is no evidence for predators with periodical cycles that align with the life cycles of cicadas. This would be consistent with general ecological observations. Most predators consume multiple prey items. Highly specialized predators would be more vulnerable to extinction if their prey source went extinct.

Another numerical model, developed by Tanaka et al. (2009) explicitly to explore life cycle evolution of cicadas, does not include predator life cycles at all. Their results still converge on 13 and 17 year life cycles although they restricted the possible range of life cycles to between 10 and 20 years. Thus, it does not appear to be necessary for predators to evolve a life cycle that coincides with prey life cycles for the predator satiation hypothesis to work. Of course, this is consistent with the real world observations that cicadas do not appear to have predators with concommitant life cycles.

In the case of the cicadas, they are the prey, not the predators. They are not synchronizing their life cycles with the predators (if I am interpreting your entire question correctly). The argument is that cicadas have evolved synchronized life cycles to maximize survivorship. By having a large number of individuals emerge within a very short period of time, the very high density means most individuals will live long enough to reproduce because the predators (birds, small rodents, etc.) will be satiated (see Williams and Simon 1995 for a review and pointers to early literature). Some predators of cicadas will be always present so the cicadas are not synchronizing to any specific predator.

Goles et al. (2001) used numerical models to argue that such life cycles will tend to converge on prime numbers. (As discussed in the update above)

Tanaka et al. (2009) recently argued, again using numerical models, that the prime number-based life cycles of cicadas evolved as a result of the Allee effect. The Allee effect basically states that there is a positive association between the fitness of individuals in the population and the population size or density. Below a certain size, a population is unable to sustain itself and is vulnerable to extinction. Tanaka et al. argue that the Allee effect results in prime-based life cycles under varying environmental parameters. They further argue that maintenance of alternate life cycles minimize hybridization between groups with different life cycle timings.

What seems to really remain to understand the evolution of cicada life cycles is to unravel the genetic mechanisms involved with timing.

Tanaka, Y. et al. 2009. Allee effect in the selection for prime-number cycles in periodical cicadas. Proceedings of the National Academy of Sciences USA 106: 8975-8979.

Mike Taylor's answer is well-researched and inspired the following thought experiment that might help you.

Imagine a predator of the cicada which takes several years to reach maturity(say, five). The population of this predator is distributed evenly across all the different stages of its life cycle, at least at first.

One year there is a cicada eruption and all the members of this predator species are incredibly well-fed for a month or two. If the effects of this prey glut aren't perfectly evenly spread across all ages of the predator species, there will be a fitness advantage to one age group or another. Maybe the young ones grow faster, or the old ones spend more time looking for mates instead of eating. It doesn't matter which(it can even be both) as long as it's not even across all members of the predator species.

Now examine the next generation, five years down the line. The effects of the prey glut are felt here too (more parents-> more children, bigger parents->stronger children, etc etc). If the cicada cycle is five years, or even ten, every predator generation(or every other generation) that coincides with the cicada eruption gets a fitness/population bump. After many iterations, the age group of predators that matures or spawns or whatever in time to get the maximal benefit from the cicada eruption dominates. Instead of evenly distributed age ranges, you get a big group of predator species that are synced up to benefit optimally from the cicada eruptions, which is bad news for the cicadas.

The thing that regulates the predator life cycle length is the time to sexual maturity, or the generation time. If this is a factor of the cicada hibernation time, cycles develop and the cicadas are in trouble. If the cicadas use a large prime number, the number of cicada generations between matching predator generations is very large. (a five year predator cycle and 17 year cicada cycle only overlap once every 85 years.) For every predator generation that benefits optimally from the cycle, 17 of them have to live without the benefit.

Generally speaking taking a long time to reach sexual maturity is bad news for a predator species(all other things being equal), so no species to my knowledge has evolved to sync up its generations with the cicadas.

Not the answer you're looking for? Browse other questions tagged ecology population-dynamics predation or ask your own question.

26
What prevents predator overpopulation?
4
What fish (and/or shellfish) species with a multi-year life-cycle, besides salmon, die after spawning?
3
Examples of prey predator interactions where density of predator is very low and prey form groups when the predator attacks the prey for food
8
What is the difference between a predator and a parasite?
4
References concerning the relative population sizes of predator and prey
3
Can predator-prey relationship be an example of negative feedback?
4
Is it possible for a prey to become its main predator's predator?
1
Lotka-Voltera predator prey model isocline?
5
On stochastic Lotka-Volterra predator-prey model