Is there any evidence that soft tissue can be preserved for 65m+ years and if not what hypotheses exist to explain it?

I read an article on howstuffworks.com and they mentioned how we have found soft tissue in dinosaurs. According to the article even Mummies and Mammoths have no soft tissue left. Is there any evidence that soft tissue can remain intact this long even under perfect conditions? and if not what are some hypotheses that could explain it?

Schweitzer et al. (2007) studied soft tissue preservation in a number of specimens, including an 800-1000 year old moas, 300,000 year old mammoth and mastodon, and 65 million year old *T. rex. and Triceratops. The oldest specimen was a 78 million year old Brachylophosaurus. Their goal was to try to find common environmental conditions that favor soft tissues preservation in fossils. As of this study, they have not been able to identify a single common environmental factor that seems to favor soft tissue preservation. They did note, however, that the specimens from which they could extract soft tissue (with varying success) were from fluvial sandstone environments, meaning sandy rivers. They (so far) could not extract soft tissue from terrestrial mudstone or marine environments.

The importance of extracting soft tissue from fossils cannot be overstated. Based on Schweitzer's work, her and her colleagues (Organ et al. 2008) were able to develop a phylogeny that incorporated both mastodon and T. rex. The used the amino acid sequence from collagen, a protein that is abundant in soft tissue. She and her colleagues repeated the analysis (Schweitzer et al. 2009) and included Brachylophosaurus, a hadrosaur. As predicted by morphological and other evidence, the mastodon was most closely related to modern elephants and the two dinosaurs were most closely related to modern birds and alligators.

Here is the phylogenetic tree derived from Schweitzer's 2009 study. Mammut is the mastodon. Brachylophosaurus and T. rex are the two dinosaurs. 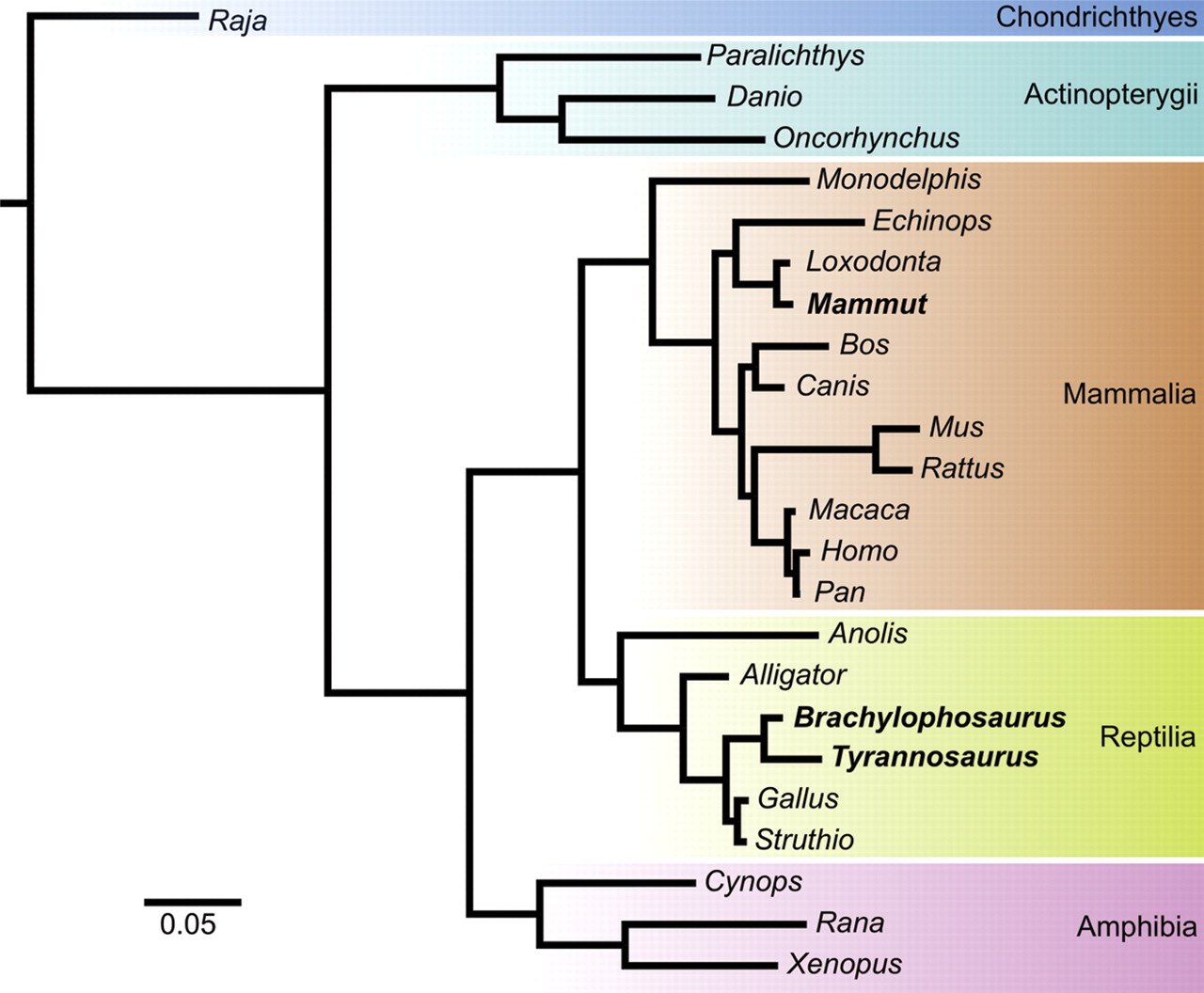 Schweitzer, M.H. et al. 2007. Soft tissue and cellular preservation in vertebrate skeletal elements from the Cretaceous to the present. Proceedings of the Biological Society of London B: 274: 183-197.

Not the answer you're looking for? Browse other questions tagged evolution tissue decay or ask your own question.

13
Is there any evidence that a virus can modify human evolution
5
Chromosome 2 fusion?
18
The Origin of Mitochondria
1
What are the minimum conditions required for "open-ended evolution"?
8
How can soft tissue exist in dinosaur fossils?
3
Is pith a ground tissue with no specialized function?
3
What did (domestic) cats evolve from?