What is this fuzzy, black fungus that grew on my plates in the 4⁰C room? [closed]

I often find the fungus below growing on my (ostensibly) sterile plates in the 4⁰C room. Presumably it takes a few days to reach this size.

The colony looks puffy and dimpled in the middle, like a chocolate cake. The colony is actually black, but looks grey because of what I assume are hyphae and/or spores on top.

It looks like if I disturb the colony physically spores will be released (I haven't tried this because I don't want to contaminate the whole lab with aggressive spores). I notice that the center of the mass curves upward over time, and after a few more days of growth this colony will probably tear itself apart, leaving a gaping hole in the middle (based observation of similar contaminants on other plates, not pictured).

I suspect this is a very common lab contaminant. It grew to this size in less than 2 weeks, and was at 4C the entire time. I noticed many plates in the same batch/sleeve were contaminated, but each plate had only one colony, so it somehow spreads from plate to plate but not within the plate. What is it? 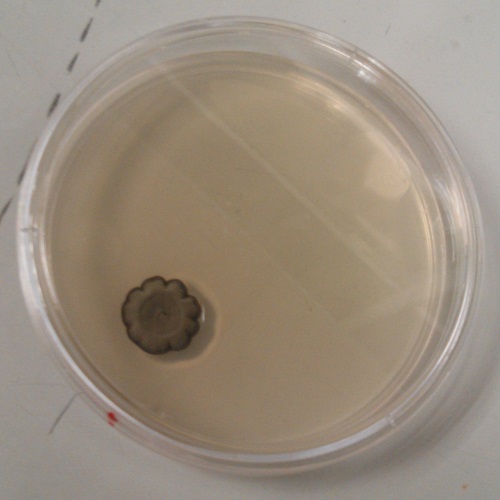 If anyone has any suggestions for simple but informative, classical microbiological techniques that would help identification (common stains, inexpensive selective media) I would be happy to try them - although it would be hard to justify very involved experiments since this doesn't pertain to my main research (in other words, if this was bacteria, sequencing the 16S would probably be out but a Gram stain is fine - this is very likely not bacteria, but I don't know the equivalents of those methods for fungi). Since identifying species is not really my strong suit, I'd appreciate if you link to a protocol when suggesting methods.

Update: I have found 4 more plates, all LB-Ampicillin, with what I suspect to be the same contaminant. With regard to Alan Boyd's comments, the colony morphology seems to be uniform in several aspects. It is not necessarily flower-shaped as I have claimed, but on the other hand, it never has a halo of satellites (dots) around it either.

Photos of the plates:

Browse other questions tagged microbiology species-identification mycology or ask your own question.