Importance of the additive genetic variance

As stated here, the fundamental theorem of Natural Selection (NS) by Fisher says:

The rate of increase in the mean fitness of any organism at any time ascribable to NS acting through changes in gene frequencies is exactly equal to its genetic variance in fitness at that time.

On the other hand, NS reduces additive genetic variance (discussion about the origin of this knowledge can be found here). The genetic variance of a population for multiple traits is best described by the G-matrix (here is a post on the subject).

What is a G-matrix

How can one model how the G-matrix changes over time because of selection (assuming no mutation)?

Fisher's fundamental theorem is a great place to start off with the theory of this:

The rate of increase in fitness of any organism at any time is equal to its genetic variance in fitness at that time.

What this means (as I am sure you realise but I will put in so the answer can help others too) is that evolution by selection depends not only on the strength and form of selection, but the genetic variation underlying the selected trait. This is captured in the breeders equation $\Delta \bar z = G \beta$ where $\Delta \bar z$ is the response (in a multivariate space), $G$ is a matrix of the genetic variance within traits covariance between traits (different traits, the same traits in either sex, or the same traits in multiple environments) and $\beta$ is the vector of selection gradients on all of those contexts. It seems reasonable to expect that given enough time selection will erode variation because standing genetic variance is a finite resource and selection removes polymorphism while not adding any new variants (that's for mutation & migration).

This paper discusses the effects of both selection and drift on the G-matrix, they also deal with some modelling to support their results. More specific to simulation, this article by Arnold et al (a number of the big players in the G-matrix circle). It reviews "empirical, analytical, and simulation studies of the G-matrix with a focus on its stability and evolution." It would be a really good read for you on this subject.

This paragraph captures the essence of your question:

Focusing on a longer time scale, we find that the G-matrix evolves in expected ways to the AL [adaptive landscape] and the pattern of mutation. In the absence of correlational selection (rω = 0) and mutational correlation (rμ = 0), the average G-ellipse is nearly circular, although the ellipse fluctuates wildly about this average (first row in Fig. 6). At the opposite extreme, when the leading eigenvectors of the AL and the M-matrix [mutation matrix] are both inclined at an angel of 45°, the leading eigenvector of G is pitched at the same angle (last row in Fig. 6). Between these two extremes, G tends to evolve to a shape and orientation that represents an intermediate compromise between the AL and M. In other words, the simulation results confirm our intuition and theoretical expectations (Lande 1980b) that G should evolve toward alignment with the AL and M.

Simulation studies of the G-matrix:

The last article there by Reeve is probably the best paper for your question because it describes in some detail the simulation model they use and how it is all set up. Briefly they simulate a population of 4000 diploid individuals with three genetically correlated traits with separate but identical sexes, random mating, and discrete generations. 20000 generations are simulated to allow mutation-selection-drift equilibrium (almost like a burn-in time on an MCMC chain). They then shift the optimum for one trait by 10 standard deviations and simulate 1500 generations in five replicates. There are 100 unlinked loci underlying the traits, with 50 loci affecting each trait (randomly assigned) meaning there is likely some degree of genetic correlation though it is not perfectly correlated (for some reading on genetic correlations and the evolution of differences you can read Bonduriansky & Rowe 2005, Poissant et al 2010, and Griffin et al 2013). The model then assigns phenotypic values to individuals, and fitness is derived. Figure two shows how the mean, skew, and kurtosis of the variance distributions changed for those 1500 generations.

"While the mean trait values change under selection, so also will the G matrix, its orientation tending to shift in the direction of selection. ... Genetic drift may also play a role in changing the G matrix, but in this case the change will be random though on average producing a proportional change in the constituent variances and covariances."

I am presenting a speculative approach since nobody has mentioned about any existent models yet.

Assuming that selection is based on performance in certain tasks; performance is a function of traits which in-turn is a function of genotype. Performance is a non-linear function of genotype and selection imposes a cutoff/bandpass filter on the performance vector. So selection causes some individuals to perish — which genotypes are selected out depends on their relative contribution to the performance function. As you already mentioned in the question, selection would lead to reduction in variance; some of the diagonal terms would reduce. Now if your traits are truly independent (as in case of additive variances) and also uncorrelated then then extradiagonal terms would be very small and their contribution to the eigenvalues would be minimal.

Overall the eigenvalues and hence the determinant of the G-matrix would decrease upon selection.

Addition based on the points mentioned in rg255's answer

The paper mentioned by rg255 talks about the shape of the distribution corresponding to G-matrix. 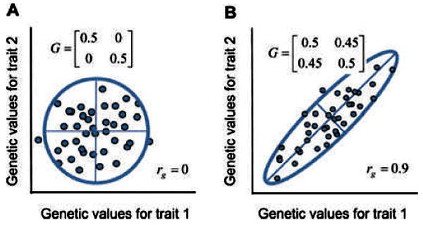 The eigenvalues correspond to the axes of the ellipse. In the first case eigenvalues are 0.5 and 0.5; in the second case they are 0.05 and 0.95.

Alternatively, assuming a normal (Gaussian) bivariate distribution of values, we can represent the cloud with a 95% confidence ellipse whose axes represent the principal components or eigenvectors of the G-matrix (Fig. 2). The length of each axis is determined by the corresponding eigenvalues of the G-matrix.

Selection may reduce the area of the ellipse if the boundary points get selected out, hence causing eigenvalues and determinant to reduce. However, if the central points are removed (some kind of inverse-bandpass filter), then the limits of variation would not change. In other words the shape or size of the ellipse would not change — it would just become sparse.

2
Adaptation by standing genetic variation and fitness variance
32
Is evolution a fact?
15
Did Darwin ever reach the conclusion that selection will remove variation?
5
Fisher's Fundamental Theorem of Natural Selection
5
What is needed for a G-matrix?
3
How to predict future generations from heritability
2
Heritability of trait stronger from one sex over another?
2
Infer gene frequency within a species over time
1
How would cloning affect conservation of rare species?
0
How are the dominance and additive effects reflected in the mean and variance of the offsprings of two individuals with known phenotype?
See more linked questions

11
What percentage of the fitness variance is explained by the 'n'- most important loci?
5
Fisher's Fundamental Theorem of Natural Selection
2
Additive genetic variance with $n$ alleles
15
Did Darwin ever reach the conclusion that selection will remove variation?
7
What does "Mutational Variance" mean?
4
How many traits can a multivariate breeders equation handle?
4
Effect of recombination on the rate of loss of genetic variation
9
Genotype to phenotype map and the G-matrix