What is Serological Analysis of cDNA expression library?

I went through this article:
http://cancerimmunity.org/serex/introduction/
but could not really make out. Can someone please explain this to me in a simpler manner?

(I have not studied biology since last 8 years and now I am going through it because I need it for my research. So if someone can describe it in simple language it would be very helpful)

With this method you want to identify proteins on cancer cells which are immunogenic so you can use them to boost an immune response against the cancer cells.

To do so, you extract the complete mRNA from a cancer. These mRNAs represent all the genes which this cancers expresses (which then also contains the immunogenic proteins). These mRNAs are cloned into bacteriophages (viruses that only infect bacteria) and are then used to infect bacteria. During this infection the virus expresses the protein which has been cloned into his sequence and which originates from the cancer cell. The infection of the bacteria leads to the formation of plaques (wholes) in the bacteria which grow on the surface of a culture plate.

You then use the serum of cancer patients on these expressed proteins to see, if there are antibodies which can recognize these cancer antigens (and could be used to detect and mark them). If there are proteins which only react to the sera of cancer patients but not to controls (to exclude) unspecific reactions, then these proteins are identified and can be used to generate antibodies against this specific cancer type. It works like in the figure below (from this paper): 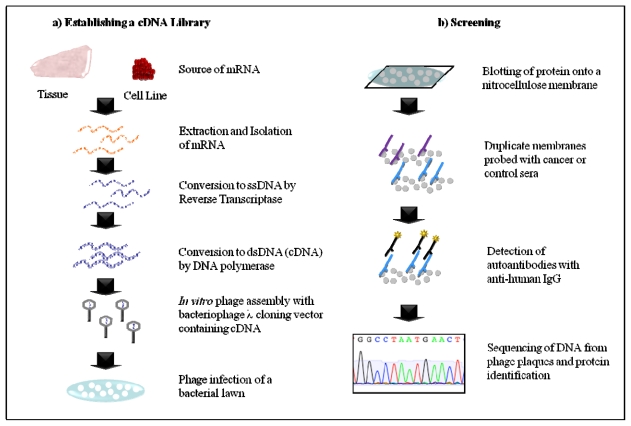 Not the answer you're looking for? Browse other questions tagged molecular-biology cell-biology bioinformatics immunology or ask your own question.