Does human eye lens have a magnification of its own?

I have always wondered if the lens in our eyes have any sort of magnification by default. And if yes, if we're actually seeing everything around us bigger/smaller than what they actually are!

Has any research been done on this?

The magnification by the lens of the eye is well understood. This document, written by Dr. Glenn Chapman at Simon Frasier University in British Columbia, Canada, lays out some of the technical details. The image below is taken from that document. I modified it slightly by enlarging the $s$ and $s'$ variables because they are important for this answer. 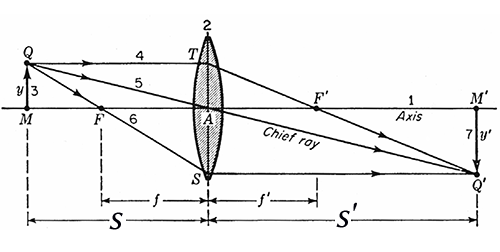 For a simple lens like that in our eyes, magnification, $m$, is calculated as

where $s'$ is the distance between the lens and the retina at the back of the eye, and $s$ is the distance between the object and the lens. For the human eye, the distance $s'$ is about 24 mm, or just a bit under 1 inch. For an object to have exactly 1:1 size ratio (no magnification or reduction), it would have to be exactly that same distance from the lens. That is, the object would have to be about 24 mm in front of our eye. The problem is that, unless you are myopic (nearsighted), you cannot focus on objects closer than about 25 cm (about 10 inches)

As a simple experiment, hold your finger upright in front of your eyes at arms length. Bring your finger closer and closer until you feel your eye lashes. Your finger looks smallest when it is farthest away from your eye. As you bring it closer ($s$ is getting smaller) your finger appears larger and larger. When your finger gets to about 24 mm, then $m=1$. When your finger touches your eye lashes, the distance is less than 24 mm, and the finger is magnified to larger than actual size ($s > s'$ and $m > 1$).

This also explains why distant objects appear smaller than closer objects. If you see a stop sign at 500 m and a stop sign at 100 m, the closer sign looks larger than the more distant sign. But which is the actual size? Neither, because the lens changes the apparent size. The way to see the actual size is to stand with your eye about 24 mm away from the sign. Then, magnification will be exactly 1:1 and you'll know the true size of the sign. You just won't be able to focus on it.

13
Why can't ciliary muscles in the human eye relax like other muscles?
4
Does myopia tend to decrease the risk for later hyperopia?
9
Why do we blink instead of winking each eye independently?
8
Cerebral activity during exposure to non - visible light
0
What is the advantage of the inverted image on the retina?
2
Is chromatic aberration related to the spectral sensitivity of the human eye and can it cause "relative myopia" and "relative farsightedness"?