Why sleep? No, actually, why wake?

I was just reading the sleep threads, and I wondered, why is the body so constructed so that sleep is necessary? (Is it just a design error?) But then, how do things come to be awake at all? How did this happen? Yes, I can see the advantages, but how did it happen? What is "awake"? Are single-cell animals awake?

The question I want to ask is, how did things progress from just sitting around ingesting and growing, like plants, to being something more? Is it more? What do "wakers" have that the rest don't?

Sorry, I'm not a biologist, this may be a foolish question, or in the wrong place.

Based on various comments, I've expanded this answer. Though long, I cannot cover the depth of the topic of sleep but I tried to address the issues asked in the original question while broadly highlighting various aspects about sleep research. I welcome any suggestions for improvement.

Finding a concise scientific definition of sleep is difficult, probably because sleep is a very complex process. For example, Diekelmann and Born (2010) state that,

Sleep has been identified as a state that optimizes the consolidation of newly acquired information in memory...

Sleep is characterized by the cyclic occurrence of rapid eye movement (REM) sleep and non-REM sleep, which includes slow wave sleep (SWS, stages 3 and 4) and lighter sleep stages 1 and 2....

Most attempts to explain what sleep is include the four stages of sleep along with REM (rapid eye movement sleep). The stages are nicely explained by this National Institutes of Heath website on Brain Basics: Understanding Sleep. Each stage of sleep can be identified by specific types of brain waves, shown below (image from here). 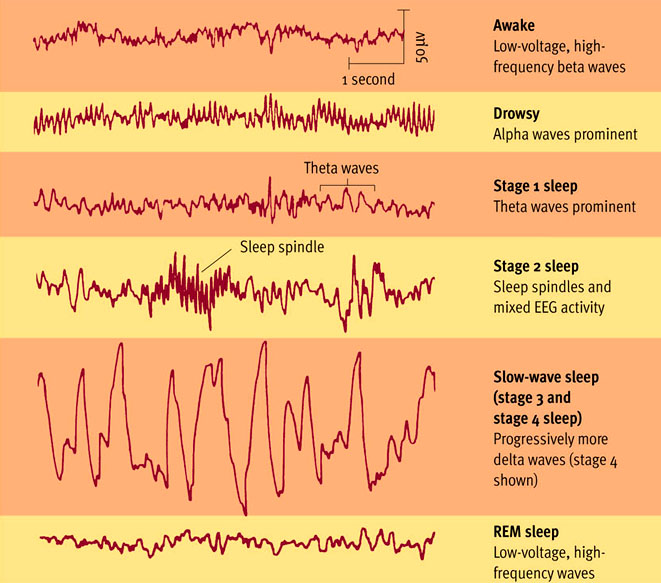 Notice that the first wave pattern is characteristic of being awake. The wave patterns change as an individual becomes drowsy and then falls asleep. While asleep, the brain cycles through the different stages, each with its characteristic brain waves. Associated with these stages are changes in metabolic activity and physical capabilities. For example, the Brain Basics site notes that we become less responsive to external stimuli and metabolic activity slows. During REM, breathing becomes rapid and we can't move the muscles in our arms or legs. Similar states are found in other invertebrate and vertebrate organisms, which suggests that these are common indicators of sleep or a sleep-like state. Some examples of these states are given in the citations and links below.

Defining "awake" seems just as difficult as defining "asleep" but once again neural activity seems to be key indicator. As shown in the figure above, being awake has characteristic wave patterns in the brain that are distinct from the wave patterns associated with sleep. In addition, none of the physiological/physical states associated with sleep stages are present when you are awake.

In both cases, asleep and awake, the indicators seem to be based on characteristic neurological activities in the brain or, in the case of some invertebrtes, the organized nervous system. This interpretation is important when considering whether organisms without any type of nervous system is capable of sleep or the alternate state: awake. More on this at the end.

Science magazine, in the 125th anniversary issue, made a list of 125 big questions that remain to be answered by scientists. One of those questions was "Why do we sleep?" The role of sleep remains elusive but many ideas have been put forth about the role of and the evolution of sleep. The leading idea seems to be memory consolidation. This article by Kavanau (1997) reviews ideas about the function of sleep and why it evolved. He suggests that sleep and memory evolved as as ways to improve or maintain effective connections among the nerve cells in the brain. Some circuits are used frequently, such as those used to process sensory information like vision. Other circuits are used less frequency, such as circuits that can be used to store memories. Sleep may allow those infrequently used circuits to be activated and used without causing conflict with the circuits used during "restful waking." In other words, sleep may allow the lesser used circuits to be exercised, which can help to consolidate memories. So, at least one function of sleep may be to help maintain efficiency in how information is moved around the brain by maintaining the brain circuitry. See also this review by Siegel (2005) and the previously mentioned article by Diekelmann and Born (2010).

This Scitable article has a nice overview of the importance of sleep for humans, as does the Brain Basics site.

What organisms sleep or have sleep-like activity?

Sleep has been well-studied in vertebrates, from fishes (Marshall 1972) to mammals (Pace-Schott and Hobson 2002). However, not all vertebrates necessarily sleep (Kavanau 1998). For example, continuously swimming fishes like some sharks and blind cave fishes may not sleep. These are just three references of many about sleep in vertebrates.

Sleep and sleep-like activity has not been as well studied in inertebrates. As noted in this thread, there is evidence for sleep in at least some insects. Cephalopods like octopuses show signs of sleep (Mather 2008). Caenorhabditis elegans, a nematode worm and model biological system, shows sleep-like states tht are similar to mammals and fruit flies (Raizen et al. 2008). The most basal organism that shows evidence of sleep-like patterns is a jellyfish called Chironex fleckeri (Kavanau 2006). Cnidarians like jellyfishes are the basal (most "simple") group of organisms with an organized nervous system. Interestingly, C. fleckeri process a lot of visual information obtained through their 24 eyes. Twelve of the eyes are simple, light-receiving structures but 8 of the eyes are camera-like, meaning they have a lens. Kavanau (2006) argued that sleep (up to 15 hours) in this jellyfish allows time for its simple nervous system to process the visual information obtained while it is awake. The presence of sleep-like activity in jellyfish and nematode worms suggest that sleep is an evolutionarily ancient phenomenon.

This Wikipedia page on sleep in non-humans overviews evidence for sleep in vertebrates and invertebrates. It's not clear whether androids sleep or what they dream about if they do sleep.$^1$

In contrast, organisms lacking any type organized nervous system would not be capable of sleep, at least as currently defined. If they do not sleep, then they also cannot be awake because being "awake" seems to be recognized as neural activity not typical of sleep. Therefore, it seems to me that single celled organisms like bacteria and paramecium are neither sleeping nor awake. Plants are neither sleeping nor awake. They are metabolically active but they are neither asleep nor awake because they do not have any type of neural activity.

I'm not a sleep researcher (but sometimes I am a sleepy one) nor am I a neurophysiologist. I just walked through my train of thought. I welcome contrary views along with the supporting science.

Marshall, N.B. 1972. Sleep in fishes. Proceedings of the Royal Society of Medicine (abstract).

All organisms (except viruses?) need some kind of nutrition to survive and reproductive activities for the species to survive. As humans don't do these while asleep in a first approximation I would consider those life phases as sleep when these do not happen. In this sense clostridium bacteria could be considered asleep when in their endospore states, a sunflower seed could also be considered asleep as it is inactive.

66
Do ants or other insects sleep, and if so why?
6
What is happening physically when I get sleepy and when I wake up?

5
Does playing music during sleep actually suppress rather than rouse the brain?
2
Is the quality of sleep dependent on sleep duration?
6
What is happening physically when I get sleepy and when I wake up?
5
Do deaf people sleep better?
8
Why do we sleep?
4
Why is Sleep apnea only risk to males?