Do the eggs for larger litters come from the same meiosis events, or different ones?

There are some species of animals that give birth to more than one pup at a time. In these species, are the fertilized eggs all from one or a limited group of meiosis processes, or are they from different ones?

To illustrate the idea, take for example a case where some animal ends up with seven offspring in a litter. Do the original eggs come from different meiosis events?

Or from a smaller set of events?

I am aware that, at least in mammals, that egg cells are actually produced long before they are used, and pooled for later use:

I do not have any idea how this would work for other types of life though, like birds, reptiles, or fish. How does it work for those sorts of life?

I'm not sure about the ubiquity of this but, in many animals, each primary oocyte that undergoes oogenesis only produces one mature egg. The other products of meiosis are polar bodies, which are not fertilised. These cells often degenerate but can sometimes play supportive roles in embryogenesis. 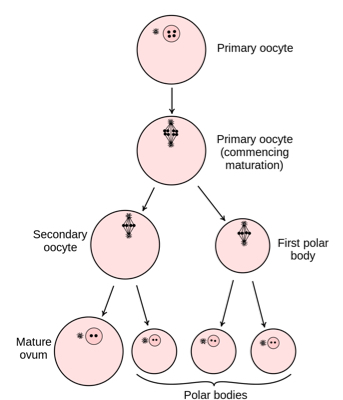 To answer your question, each mature egg is necessarily from a different meiosis event and so it is not guaranteed that all of the mother's chromosomes are represented in her offspring.

While your question asking about birds, reptiles and fish (oh my!) may be too broad, hopefully looking at frog oogenesis can show some differences in large offspring number v. small offspring number. Some frogs even give birth to live offspring (Iskandar et al. 2014).

Much of this explanation can be found in Developmental Biology, 6th edition by Gilbert SF. 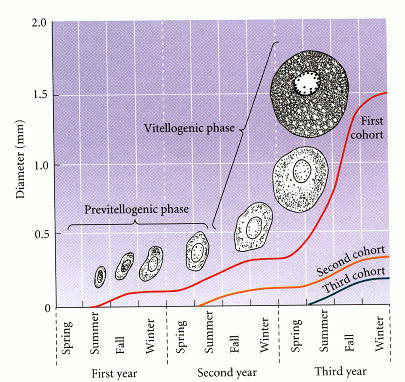 This shows that different "cohorts" of oocytes form, develop, and are released, rather than a single group of mitotic events that are released gradually (as in humans). When the eggs have undergone vitellogenesis (yolk development), they are ready for fertilization.

As far as this question is concerned:

If you're asking whether or not all of the mother's chromosomes will be represented in her total offspring, perhaps--with a large number of offspring (and a high ratio of fertilized eggs) the probability is very high.

No single offspring will contain all of its mother's chromosomes. Let's look at a diploid organism with two pairs of chromosomes: A and B. At the beginning of meiosis I, a cell will have one copy of both pairs:

Then comes synthesis, duplicating all chromosomes. Now we have two copies of each pair:

In prophase, chromosomes are condensed and the duplicated pairs connect in a process called synapsis:

In anaphase, the pairs are pulled apart so that each daughter cell has two copies of a single member of the pair:

Note that at this point it is not possible for either of the daughter cells to contain all of the mother's chromosomes.

These are now haploid, and await the male's sperm to make them diploid once more. Also note that daughters Y1/Y2 and Z1/Z2 are chromosomally identical (they can be different in practice with crossing over).

Here is a prettier representation of what I just described (Wikipedia): 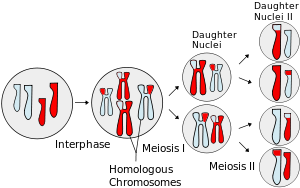 Edit: To address your clarification:

I am not talking about whether or not any of the daughter cells contains all of the mothers genetic material by itself, but rather whether every segment of genetic material is found in at least one offspring.

This is more of a probability question. If all oocytes mature, and are fertilized, the answer is clearly yes. However, not all oocytes are fertilized. Let's look at the same four daughter cells from my earlier example:

Let's say 2/4 (50%) are fertilized by the male frog. Going through all possible fertilizations, let's see how many combinations result in all of the mother's genetic material being passed down:

The answer to your question really depends on what proportion of oocytes make it to maturity, and what proportion of mature oocytes are fertilized. The probability of all the mother's genetic material being passed down increases with increasing fertilization ratio/egg number, so given the high number of offspring produced by many species of frog, I'd say that there is a good chance of all the mother's genetic material making it to the next generation, although it is not guaranteed.

Not the answer you're looking for? Browse other questions tagged genetics reproduction chromosome meiosis or ask your own question.

1
Study case of the inheritance system of Oenothera
1
what is the modern, molecular explanation of independent assortment of alleles?
3
When does genetic randomization happen?
3
Human ancestor reproduction after chromosome fusion
3
Biological Calculations