A major concern of conservationists in south Florida is the population of native Pumas, the Florida Panther.

Until recently, it was thought that the Pumas were a genetically distinct subspecies, but some genetic studies have shown that they may not be, and so their subspecies status is disputed.

If the population of Pumas in Florida is genetically distinct from other populations in North America, is there any precedent for using a distinct subspecies to bolster populations of an endangered subspecies?

If the population of Pumas in Florida is not genetically distinct from other populations in North America, would there be any behavioral issues (hunting, etc.) in animals brought from other biomes to south Florida, either as adults or offspring of transplanted adults?

The study you are referring to is probably a study by Culver et al. (2000). They performed a genetic analysis of 315 individuals of the American Puma (Puma concolor), also known as the cougar. Their thorough analysis (especially for the late 1990s) showed that the Florida panther and the western North American pumas were the same subspecies, Puma concolor couguar (note the proper spelling of the subpecies). All individuals north of Nicaragua are this subspecies. From Nicaragua south into South America, they recognized five additional subspecies of American Puma. The distribution of the subspecies, as well as the sample locations, are shown in the figure below, taken from Culver et al. (2000). 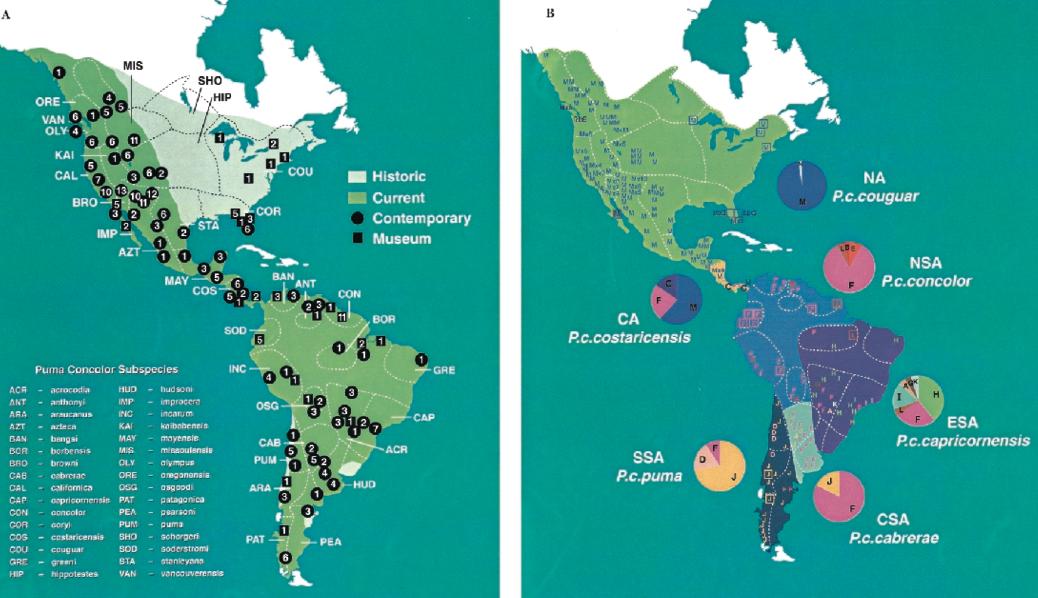 Notice in the figure above that the American Puma used to occupy most of North America but now is restricted to the the region west of the Rocky Mountains, except for the isolated Florida population. Because the genetics of the Florida Panther and the western American Puma are effectively the same, individuals from the western US can be introduced into southern Florida. This idea was first proposed (to my knowledge) by Hedrick (1995) as a conservation measure by introducing genetic variation and reduce the effects of inbreeding. In that same year, eight female pumas were transferred to Florida from Texas, which had the population of panthers closest to Florida. Introducing pumas from outside of Florida has pros and cons, reviewed by Pimm et al. (2005), from both a short-term conservation perspective as well as long-term evolutionary perspectives.

Several years after the Texas pumas were introduced, Johnson et al. (2010) performed a genetic analysis of the Florida population. They showed that the Texas females were indeed reproducing in Florida. The release of Texas panthers did introduce more genetic variation into the Florida population and reduce the effects of inbreeding. The net effect was that more Florida panthers were surviving. The downside is that habitat loss continues and the effective population size is still very small. That means that inbreeding is still very much an issue.

The studies to date have focused on genetic integration and overall recovery due to the introduction of genetic variation but I did not find any studies that reported any behavioral changes since the 1995 introduction. Given that it was only 8 females, I would not expect any significantly different behaviors to be introduced into the Florida population.

Introducing more genetic variation from Texas (and perhaps populations farther west) may be helpful but ultimately preservation of habitat and improving ability of individuals to move among available habitat fragments via corridors is necessary to protect the species long term.

Not the answer you're looking for? Browse other questions tagged zoology adaptation species or ask your own question.

10
Why would deer continue to cross a river full of crocodiles even though some of them have been killed?
19
Was the recent “conservation hunt” of a black rhino supported by science?
10
What is a subspecies?
2
Cross-species infections
0
Data for giraffe subspecies population change over the time.
2
Why is the spirit bear/Kermode bear a subspecies of the American black bear Ursus americanus?