Did spiders respond to light for building webs before artificial light was invented?

I have noticed that during summer, beautiful spider colonies grow wherever a strong light is: 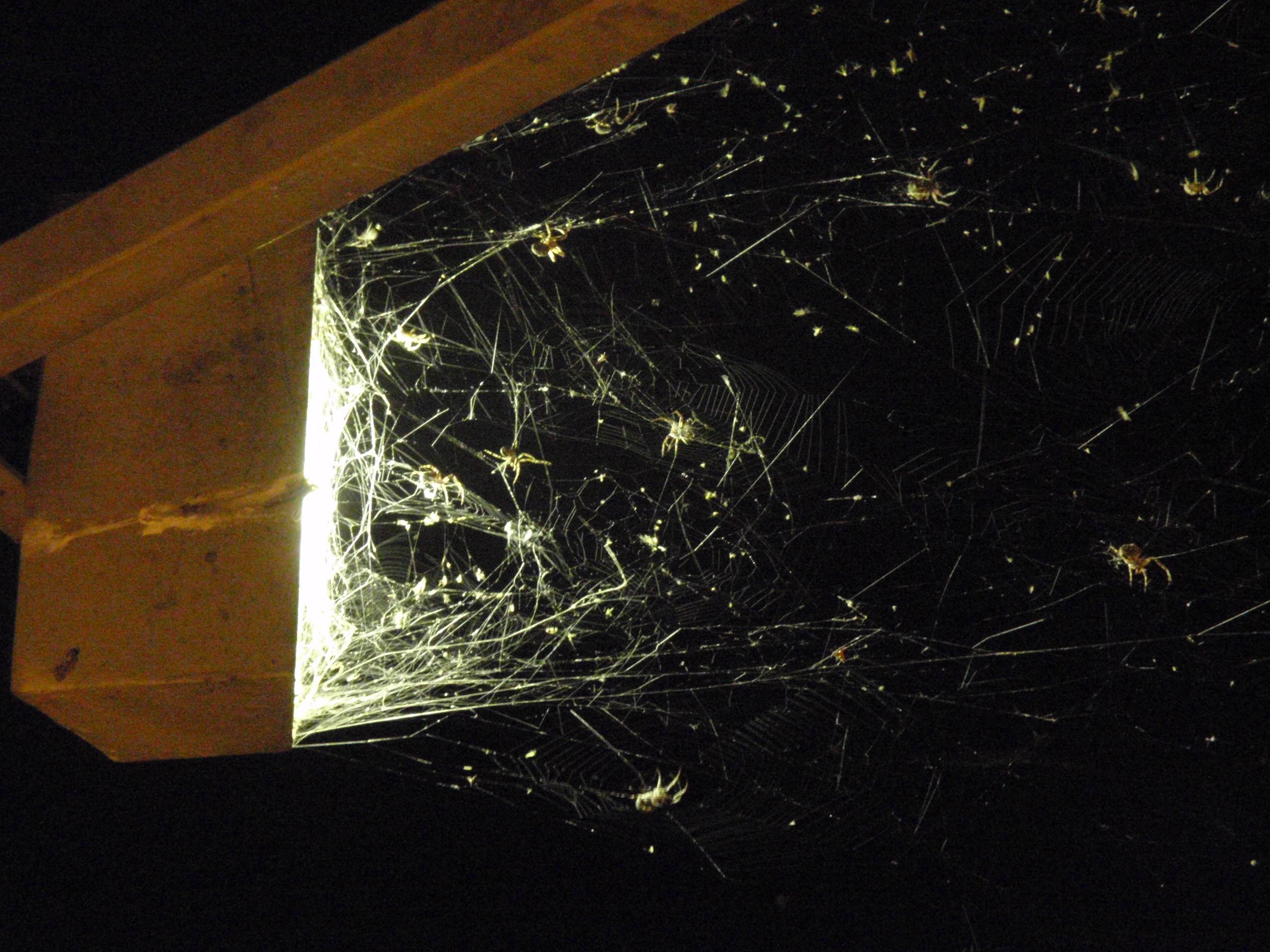 I'm wonder whether spiders evolved to seek naturally lighted areas where they build nests (before artificial lights) or if they always had the ability to seek places full of juicy insects - and in cities this ability just leads them to lights.

Spiders are capable of choosing habitats based on the specific requirements of the species (reviewed by Riechert and Gillepsie 1986). Spiders move within and among suitable habitat for a number of reasons, including damage to existing webs, and life history changes that require new habitat types. They point out that spiders are probably choosing the proper habitat based on various cues from the habitat. How the spiders respond to the cues would have been shaped by natural selection. The specific cues used will vary among the different species of spiders but may include wind speed and direction, thermal regime (which affects dehydation foraging time), odor cues, density of competing spiders, and more. The many options are reviewed by Riechert and Gillepsie, which is freely available and not too filled with technical jargon.

Many species of spiders do select their habitat based on prey availability. Gillespie (1987) lists a number of references. She also studied the long-jawed orb weaving spider, which lives along streams and rivers. She found that this spider tends to build nests in open areas near water, which prevented dehydration, but the exact site chosen was determined by prey availability. Enders (1973) studied a different orb-weaving species. He found that the juveniles were most often in densely vegetation areas but that the adults were in more open areas at the edges of woods. He suggested that web site selection of adults is driven by light.

Heiling (1999) performed an interesting study on a nocturnal orb-web spider. The spider lives near the water so it will sometimes build its orb webs on the bridges crossing the water. She found that more spiders build their webs near the lights on one particular bridge compared to unlit parts of the bridge that were otherwise built the same. She found that there was more insect activity around the lighted area (no surprise there) and that the spiders that built near the lights caught more of those insects compared to the spiders that built away from the lights.

These studies suggest that light may have functioned as a visual cue for web location long before humans lit up the night sky with house and street lights, at least for spiders that build webs in open areas. Spiders may identify open areas by light cues (lighter vs darker), perhaps along with other cues such as air movement and humidity. Lighter areas would presumably be more open and thus favorable to large numbers of flying insects. Natural selection would favor spiders that responded to light for web construction. Artificial lights may present a very strong visual cue that attracts spiders, as well as insects.

However, other cues such as olfactory cues (mentioned by Riechert and Gillepsie 1986) may attract spiders. If insect prey are found in high abundance in open areas or near artificial lights, then you would expect higher concentrations of chemical odors emitted by the insects, thus drawing more spiders.

Spiders evolved long before street lights were invented. The oldest known spider fossil dates back to between 374-380 million years ago (Coddington and Levi 1991. Street lighting of any type only goes back a few centuries. So, spiders were spinning webs long before humans evolved, and before we humans began lighting our streets and homes at night.

The spiders are simply taking advantage of the situation. The lights draw insects, the food for the spiders. Webs constructed near light sources may catch more insects than webs constructed away from lights. Could this affect the current or future evolution of spiders? Perhaps. The spiders that build webs near the lights may get more food, which allows them to obtain more energy, and potentially produce more offspring. This would increase their fitness relative to spiders that do not build webs near lights, which could lead to evolutionary change occurring over the next several thousands of years. However, it may be that so many insects flying around the web end up damaging the web much more often than the spiders away from the lights, so the spiders near the light expend much more energy maintaining the web and removing insects they don't eat. This is one extremely hypothetical example (of many; see comments) to illustrate the point. We can't actually predict what evolutionary changes might occur, or even if they will occur.

Some of the hypotheses stated in the comments below could be tested to determine whether natural selection is possibly occurring on spider species that build near lights, or if the observation is simply observation bias as noted by @Oreotrephes.

4
Why do spiders make their web near the ceiling and near a light source?