What is the reaction mechanism of dopamine hydroxylase converting dopamine to norepinephrine?

The reaction is basically shown below. Dopamine hydroxylase is an enzyme, so I'm not sure if we can have a theory based on organic chemistry. On the other hand, maybe there is a theory that involves structural biology?

There are various studies on the mechanism of action of dopamine beta-hydroxylase (DBH).

This review (sorry, non-free article) by Kaufman and Friedman was written less than 10 years after the discovery of the reaction of conversion of tyrosine into [nor]adrenaline in the adrenal gland:

It makes for an interesting read, as they start detailing the history of our knowledge on adrenaline synthesis (well, at least at that point in time!), the various hypotheses and models that were thought of, experiments with radioactive labeled precursors and so on.

They then procede to talk about the mechanism of the enzyme. Without going too much in detail, they report experiments showing that oxygen, ATP and Mg++ stimulate dopamine beta-hydroxylase enzymatic activity, with the following note on Mg++:

[...] Mg++ is required for the uptake of catecholamines by the adrenal vesicles. EDTA inhibits the uptake of the precursor, hydroxytyramine, but does not inhibit the enzymatic conversion to norepinephrine if the vesicles are intact.

They also list the requirement for two cofactors: ascorbate and copper

Bringing to the reaction:

Only recently, however, was the enzyme obtained in a pure state and the metal characterized by direct analysis. The metal is copper and it is present in a concentration of 0.65 to 1.0 ug per mg enzyme (4 to 7 moles of copper per mole of protein). It can be removed by treatment with concentrated potassium cyanide. This copper-free enzyme is inactive but can be reactivated by addition of Cu.

They then proceed to detail some basic mechanism of action, which I will not report here for briefness.

A few years later, researchers from the same group authored a book chapter for the American Chemical Society entitled:

From the abstract (I do not have access to the full text of this):

Dopamine β-hydroxylase catalyzes the side-chain hydroxylation of dopamine and other phenylethylamine derivatives. Ascorbic acid serves as a specific electron-donating cofactor. The enzyme from bovine adrenal glands contains Cu2+ and a smaller amount of Cu+. When the enzyme oxidizes ascorbate to dehydroascorbate, most of the Cu2+ is reduced to Cu+. Added substrate is hydroxylated, and Cu+ is reoxidized to Cu2+.

To get to some more recent years...

A mechanism for Peptidylglycine alpha-hydroxylating monooxygenase (PHM; EC 1.14.17.3) is proposed, and

Since PHM is homologous in sequence and mechanism to dopamine beta-monooxygenase (DBM; EC 1.14.17.1), the enzyme that converts dopamine to norepinephrine during catecholamine biosynthesis, these structural and mechanistic insights are extended to DBM.

A structure of PHM along with a modeling of DBH is shown in Fig 14. You can see the two catalytic copper atoms and the possible binding of dopamine to the site. 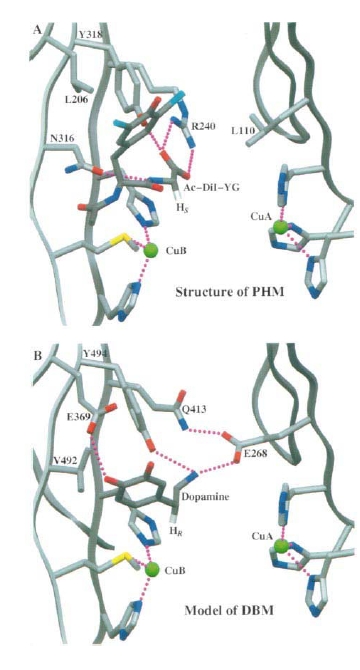 They also show a mechanism of action for PHM. Essentially, through the oxydation of ascorbate the Cu++ becomes Cu+ and can then bind an oxygen molecule that will be used to hydroxylate the product: 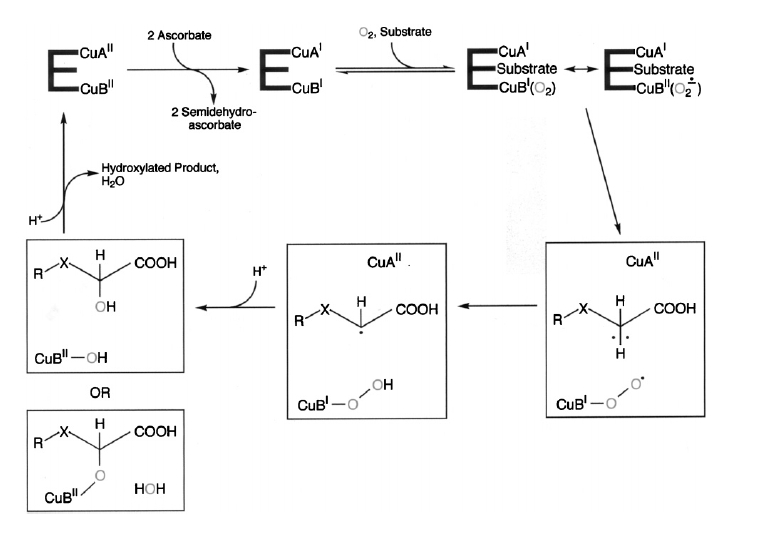 Finally, a detailed computational model of the enzyme, and its active site is shown in this paper:

The active site is shown in Fig. 7, where you can clearly see the two copper atoms in purple and green, the most important aminoacids at the active site and two water molecules in red:

Finally, a remark on your question. You say:

Evolutionarily speaking - the enzyme has evolved to add OH to the beta-carbon rather than somewhere else.

As I said somewhere else: not everything has an evolutionary explication, and evolution is not finalistic. This specific enzyme structure appeared at some point and it was evidently working fairly well, and at the time the rest of the pathway may or may not have been like it is at present, but the important thing is that the enzymatic network managed to work together. It could had well evolved to hydroxylate another position, but probably in that case we would have different enzymes downstream. The important thing to remember is that the enzyme did NOT evolve with the finality of oxydating the beta carbon.