Why aren't introns found on the ends of pre-RNA?

We recently learned in genetics class that exons always cap the ends of nascent RNA. I have been trying to figure out the reason why introns can't instead be found on the ends instead of exons. The end introns would still have their 5' and 3' splice sites, and assuming the splicing machinery functions correctly, these introns would be removed. The only thing I could imagine occurring is inappropriate nucleophilic attack of the end 3' hydroxy group at the end 5' phosphate leading to a single circular RNA. However, in a normal situation where exons are at the ends, if introns in an RNA are all removed simultaneously than it is possible that the free 3' hydroxy group of say intron 2 could attack the 5' end of another intron leading to inappropriate cleavage of the intervening exon so having exons at the ends does not solve that problem. I don't think my explanation is correct, any ideas?

RNA splicing refers to a certain kind of RNA processing mechanism which leads to the excision and exclusion of some regions of the primary transcript. You should note that this is not the only method by which such a thing can happen; Endo-ribonucleases can clip the ends of the transcript and this happens in the case of tRNA-processing. But as "splicing" happens it is essential that the excised region be in the interior of the transcript. See the figure. 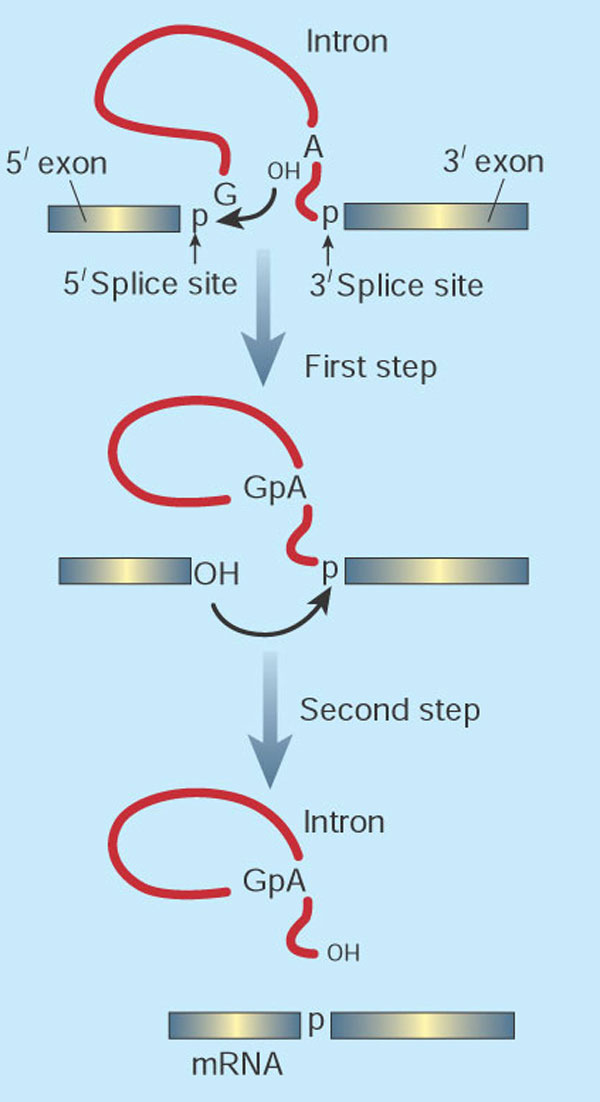 RNA splicing begins with assembly of helper proteins at the intron/exon borders. These splicing factors act as beacons to guide small nuclear ribo proteins to form a splicing machine, called the spliceosome. These animation is showing this happening in real time. see>

Not the answer you're looking for? Browse other questions tagged genetics molecular-biology molecular-genetics splicing or ask your own question.

3
Why re-label the strand ends in 3' DNA labelling?
3
Detecting Introns and Exons
2
Why can't NMR be used on large RNA molecules?
2
How does the splicing enzyme recognize where to splice the introns?
5
Do transcripts always start and end with exons?
3
Splicing and “the dominance of RNA-world”
12
Why aren't 'exons' named 'introns'?
2
Why is an intron (or exon) still called intron (exon) if retained in (excluded from) mRNA?