Defining dominance and selection in these formulae

This paper uses two equations to explain the different conditions under which sexually antagonistic genetic variance is maintained in a population, while allowing for unequal dominance, for autosomally linked loci:

where $s_m$ and $s_f$ are the selection coffecients against the less fit homozygote (or hemizygote) in males and females respectively where the most fit genotype has a relative fitness of 1. Similarly $h_m$ and $h_f$ represent the dominance of the less fit allele in males and females, and $h_m$ is not applicable in the X-linked equation because there is no dominance (due to hemizygosity it can only be homozygote).

I'm having a little trouble understanding how $s$ and $h$ are defined here. 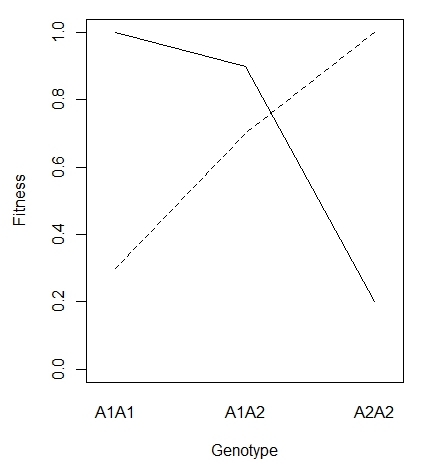 Fry (2010) borrowed his variables from Kidwell et al. (1977). Kidwell defines the fitness of each genotype as,

Kidwell then establishes the following parameters for each fitness variable for opposing additive selection,

$s_m$ and $s_f$ are the relative fitness differences between the two homozygous genotypes of each gender. The heterozygotes are assumed to have half of that differential. This is what Fry refers to on page 2 (page 1511 of the publication):

In Kidwell et al.’s notation ... the most fit genotype in a given sex has a relative fitness of 1, and $s_m$ and $s_f$ are the selection coefficients against the less-fit homozygote (or hemizygote) in males and females, respectively.

For opposing selection with arbitrary dominance, Kidwell parameterizes the heterozygous fitness components as

Notice that $h$ is modifying the fitness difference $s$ in the heterozygotes. This is due to incomplete dominance of one allele over the other. If both alleles in a heterozygote contribute equally to the phenotype, then $h = 0.5$, and you have the additive fitness described above ($w = 1-.5s$).

If one allele is incompletely dominant over the other, the selective difference $s$ will be modified by some amount, $h$. If A$_1$ is only slightly dominant over A$_2$, (say, $h=0.6$), the effect on $w$ won't be much different than if $h=0.5$. Both alleles will affect fitness but the more dominant allele will have a slightly greater affect on fitness than the other allele. If one allele is much more dominant, then $h$ becomes larger and the more dominant allele contributes more to the overall fitness than the other allele.

Finally, if $h=1$ then one allele is completely dominant so the other allele will not contribute at all to fitness. When $h=1$, the equations reduce to $w = 1 - s$ (for the respective genders), remembering that $h$ is based on the dominance of the allele with maximum fitness in the other gender.

Consider a female. Her maximum fitness is the A$_2$A$_2$ genotype. If A$_1$ is completely dominant over A$_2$, then a heterozygous female would have fitness equal to the A$_1$A$_1$ genotype which, for females is defined as $w = 1-s_f$. On the other hand, if A$_1$ is not completely dominant over A$_2$, then the heterozygote will have some reduction in fitness but not as much as for complete dominance.

For the heterozygosity effect ($h$), given that

A$_1$ is nearly completely dominant over A$_2$ in males, so the presence of A$_2$ is the male is not reducing his fitness by very much. For females,

The presence of the dominant A$_1$ allele in females has stronger heterozygous effect so her fitness is reduced more, compared to heterozygous males.

Not the answer you're looking for? Browse other questions tagged mathematical-models theoretical-biology sex-chromosome or ask your own question.

7
Alternatives to fittest-win and Moran processes as simple mathematical models of selection
9
Model for fluctuating selection
7
Empirical evidence for Group Selection?
6
Why does the slope of parent-offspring regression equals the heritability in the narrow sense?
1
Heterozygosity and overdominance
4
Replicator dynamics giving probabilities greater than 1?
3
What are the differences in the two possible methods to calculate the Hardy-Weinberg Equation?
1
How do we formulate the mutational load for "junk DNA"?