I heard and read telomere 'health' or 'length' ( if that's right ) has alot to do with cell 'health'. If telomere 'abilities' are 'restored' to a 'healthier' status then the cell it is in functions as though it were 'younger'. I was wondering since cancer cells grow without limit and 'older' cells or unstable cells grow with less ferver do cancer cells have functioning telomeres within them and would they somehow be alot more 'robust' then telomeres in normal cells? If this is true could telomeres from cancer cells somehow revitalize the telomeres in normal cells?

Telomeres are at the end of the chromosomes and get shorter with every cell division, since the lagging strand is missing a start point for the DNA polymerase. This limits the number of cell divisions to 40 to 60 before the cells go into senescence and stop dividing (they are not dying at this point). This phenomenon is called the "Hayflick limit".

Cell populations which need to divide more often or cells which need to maintain a long telomer status (stem cells) because they give rise to other cell populations, have an enzyme called telomerase which has it's own (RNA) template and can enlarge the length of the telomere. See the figure how this works (from the Wikipedia article on Telomerase): 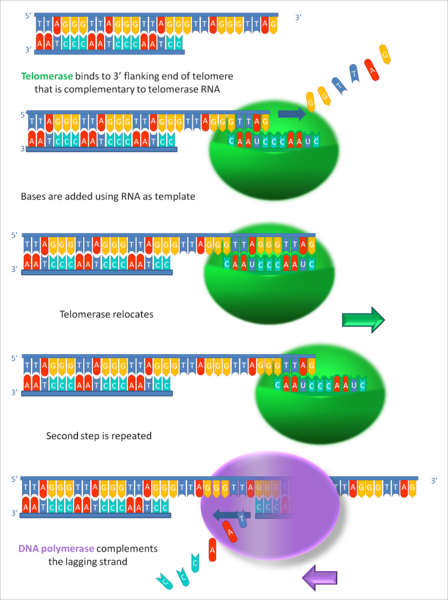 To answer your question: Younger cells have longer telomeres (compared to older cells). Usually cells stop dividing, when their telomeres get too short to avoid chromosomal damage, due to the progressive shortening of the chromosomes. In cancer cells the pathways controlling this (for example p53 and the retinoblastoma pathway) are often mutated, so that the cells divide forever. This leads to chromosomal instability, further mutations and chromosomal disarrangements, which can cause real havoc.

It also happens for some cancers that they manage to reactivate their telomerase, thus keeping their telomers at a healthy length and preventing chromosomal damage. By this activation they get around reaching the Hayflick limit for the maximum number of cell divisions and are truly capable of living forever. The famous HeLA cell line for example is telomerase positive.

The activity of the telomerase in one cell has no effect on the neighboring cells.

In some types of cancer cells, an enzyme called telomerase can actually rebuild the telomeres, making a cell appear "younger" than it actually is and preventing it from senescing (reaches a point where it stops dividing).

This Myerson review from 2000, Role of Telomerase in Normal and Cancer Cells, provides a good overview of telomeres in normal and cancerous cells.

It's not that telomeres (shown in image below) are more robust in cancer cells, they are actually rebuilt by the telomerase enzyme. 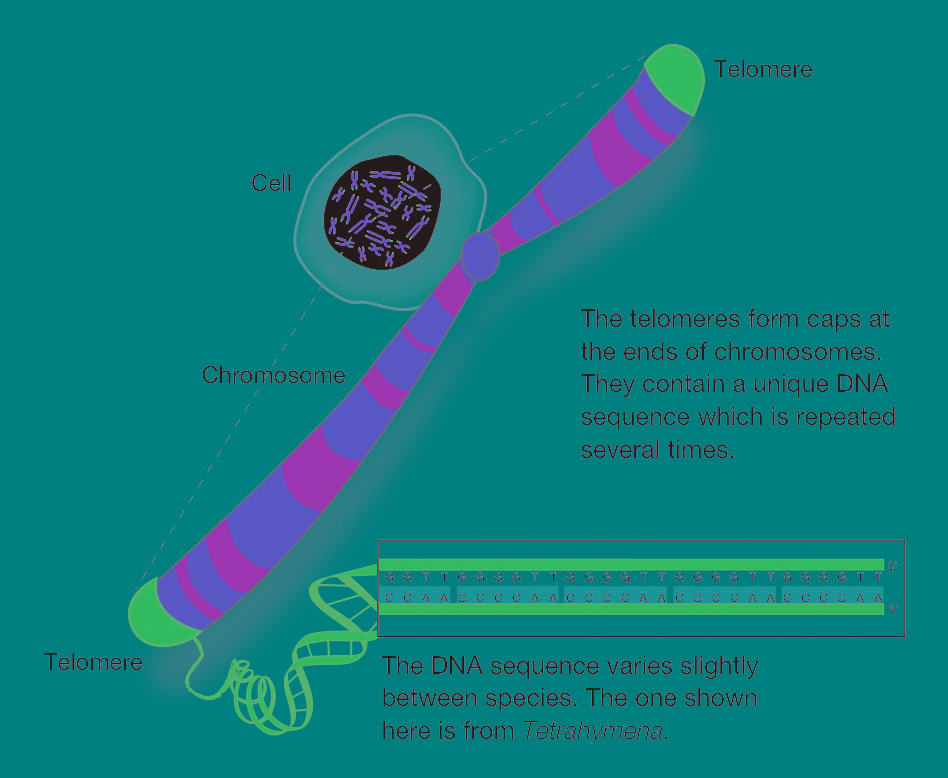 Not the answer you're looking for? Browse other questions tagged cell-biology cancer telomere or ask your own question.