Problem A transmembrane protein has 1000 aa. The 5th aa is found on the external side of the cell membrane. It interacts with the aqueous environment outside the cell. Amino acid 90 is inside the membrane bilayer. Aa 100-600 are intracellular, and 200-400 make a tight ball with minimal exposure to the aqueous cytoplasm. Amino acid 979 is found on the extracellular side of the protein where it forms a weak ionic bond with Cl-.

a. Can you draw the protein and mark positions of all mentioned aa in it?

b. What are the properties of these amino acids?      

I dont necessarily want/need the exact answers to these questions, rather i would like some guidance in what principles i would need to understand and conceptualize to attack this problem. Thanks all !

I made a quick sketch on the basis of the information you gave (this is not to scale): 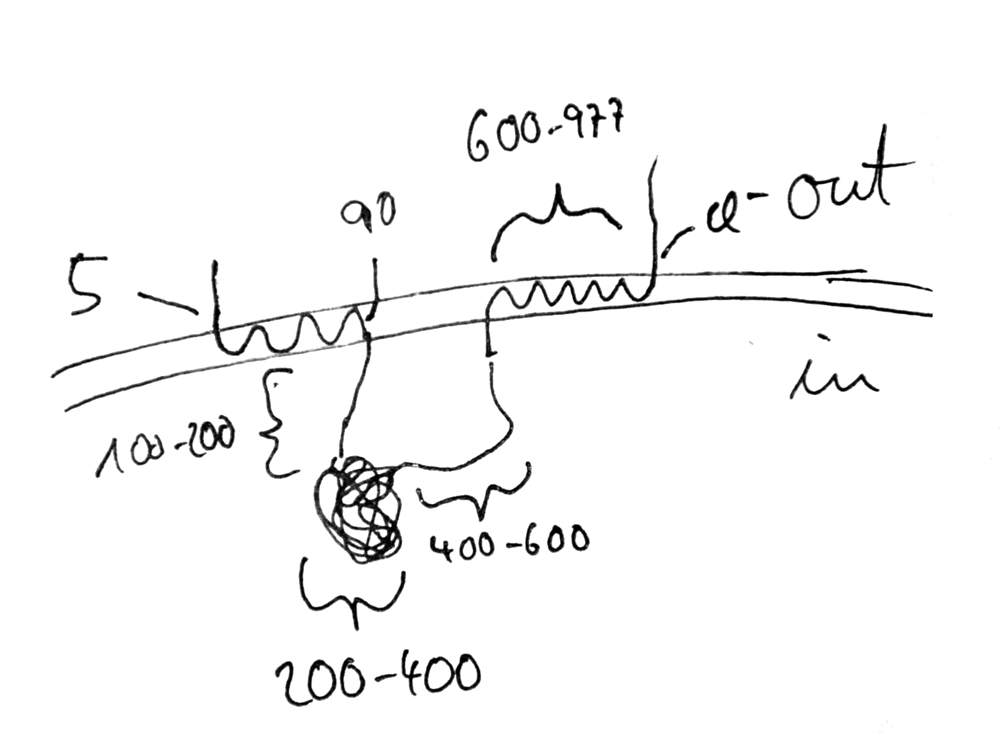 Aminoacid 5 (aa5) of the protein is on the outside, aa90 is inside the membrane. What we don't know here where the transmembrane part starts (directly with aa6 or later) and how it is organised (I indicated this as a transmembrane helix, but this can of course be different). Then we know that the border between the transmembrane part and the cytosolic part is somewhere between aa90 and aa100, that aa100 to aa200 seems to be some connecting part. The aa200 to aa400 is a globular domain which shields hydrophobic amino acids from the cytosol, so this part has to contain a high percentage of hydrophobic amino acids.

The part from 400 to 600 is again cytosolic but with no further information about the structure. After aa600 starts a second transmembrane part of the protein, but here we don't know how long it is. The maximum possibility would be until aa977, since we know the aa978 is outside of the membrane.

Membrane proteins are usually drawn as topological digrams with two parallel horizontal lines representing the membrane. lines as 'extracellular' and below the lines as 'intracellular' for instance, but that is not what is being asked for here.

Its not clear to me that the number of transmembrane spans are fully described, nor are the boundaries of the transmembane spans. I think what is being asked for could be a domain diagram of the amino acid chain.

Draw a line on graph paper representing the peptide and use a scale to label each point described. For regions draw a box around the peptide line to describe a domain, and label it.

I think its hard to talk about amino acid properties other than hydrophilic/hydrophobic. hope this helps?

Not the answer you're looking for? Browse other questions tagged molecular-biology cell-biology experiment or ask your own question.